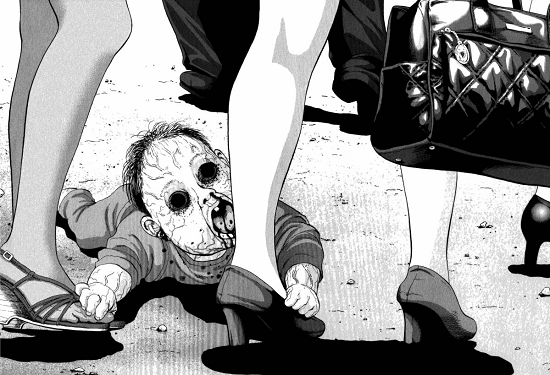 I've mentioned previously in my review for Attack on Titan: Before the Fall that it can be hard to do follow-up reviews for a manga series - while the storyline might have advanced in a new release, the manga's style and skill with which it's shown are usually very much set from the opening volume. This often means that there really just isn't all that much to talk about in a review for a later volume other than to sift through the synopsis, and seeing as modern netizens are especially hypersensitive to spoilers you have to be circumspect about that. It says a lot then about the inventiveness and originality of I am A Hero and its ability to till fresh soil in the dry and worn-out furrow of the Zombie Apocalypse genre that we're coming back to this manga for its third Omnibus edition, or six whole volumes of the original manga. I am a Hero has had a good run so far, but since the previous review for Omnibus Vol. 2 the original manga has finally ended in Japan and the question is raised about whether it is worth continuing to follow the English version to catch-up to its conclusion. In this Omnibus has I Am A Hero finally succumbed to the incurable virus that rots all eventually, or does it still have the energy to dodge the claws and teeth that would drag it down?

We pick up the story of I Am A Hero immediately where we left off at the end of Omnibus Vol. 2 with Hideo and Hiromi watching a newscast on Hiromi's mobile about the confusion and indecision caused by the outbreak that's overwhelmed Tokyo. In such a time of uncertainty rumours and speculation are rife and in the face of something unimaginable and incomprehensible others are turning away to look Heavenwards - Hideo & Hiromi fall in with an increasing river of survivors who have heard that the zombie virus can't survive in cold temperatures and thin air and so have determined that they must ascend the vast, ancient and awesome Mount Fuji to find protection from the infection. It seems unlikely but in these uncertain times it's as good a theory as any... but while Hideo and Hiromi are no longer alone and surrounded by plenty of fellow humans, will there be safety in numbers or have they only made themselves fish in a barrel?

This third omnibus volume of I Am A Hero really is a book of two halves. The first half is definitely the weaker one - the plan for civilian bystanders to find refuge on Mount Fuji goes about as well as you'd expect and it isn't long before orderly queues of evacuees are rampaging mobs of Infected. To be honest I found myself having to expend effort not to skip impatiently through the whole scenario. There is some good imagery - occasional glimpses of blue-veined slowly-succumbing victims half-hidden unrecognised between the backs and shoulders of survivors is a recognisable reference to the delusions crawling around in Hideo's peripheral vision in earlier volumes, but the civilians lack our hero's heightened awareness and they pay the price for their self-centred indifference to those around them. Seeing zombabies scuttling around as quite literal anklebiters is also a nicely nasty bit of grusomeness that makes for a keen money-shot. Nonetheless, the first half of the book is I Am A Hero at its most generic and bog-standard to date. I was starting to think that finally the manga had run out of ideas and was losing steam, but the second half brought in a completely different impression altogether.

There's a very clear demarcation line between the two halves as well. After a shocking revelation about a major character halfway through the book, the story departs from Hideo & Hiromi for a prolonged, three-chapter montage sequence about posters on an online thread on Futaba (also known as '2ch', the message board network that was the model for our own 4chan) about how the world is collapsing around them intercut with panels of spreading disaster and multiplying zombie attacks. Now, to be honest, I found the whole sequence mostly disposable - maybe the thread would seem more fascinating to the general public who aren't so hip on dank memes but for the web-connected modern manga readership we've already had plenty of experience of /a/nons being otakufags on t3h 1n7erw3bz so it all comes across as a bit tepid and affected. Nonetheless, this  long intermission kept my attention because around all of this it does two very interesting things.

There's a persuasive theory that the horror genre, far from its outward appearance of being intended to frighten and unsettle you, is actually meant to calm and reassure you. All of the classic monsters in both modern movies and older fairy tales, for all their violence, grotesqueness and power with which they wreak havoc on the world around them, nonetheless have specific weaknesses - so whatever situation you're plunged into, no matter how suddenly it arrives or how catastrophic its extent, is still survivable: you just need to keep calm, be patient, work out the system, learn the rules, and no matter how lost you may think you are you will navigate your way through to safety. There's no such thing as the no-win scenario. The unnumbered legions of incomprehensible insane Chaos turn out to be a remarkably organised and consistent bunch! Silver bullets kill werewolves. Stakes through the heart kill vampires. And for zombies, shoot 'em inna 'ead. Scissors, Paper, Stone. Those are the rules. Which makes this section stick out in that it breaks them. Early in the sequence a policeman who's been bitten shoots himself; the montage continues on for several pages of entirely unrelated scenes and you've already forgotten the policeman as just one more disposable redshirt - until without warning it cuts back to him with the gaping bullet-wound of his exploded brain... and still lurching about gnashing down on bystanders. But, but, but, come on! That's not how it's supposed to work! That's not fair! Alas, real life, much like the uncommon shamblers of I Am a Hero, doesn't get updated with regular balance patches with a changelog of buffs and nerfs for handy reference - and that unanchored, disoriented moment of being lost is when you start to experience actual horror.

The second interesting detail is the fact of that shocking revelation about a major character that I mentioned earlier. It's a real game-changer that significantly affects the status quo, and the manga does well to get you wanting more by the prolonged wait to see how the twist shakes out. If we saw the consequences immediately on the next page then it would just be another incident in the long obstacle course of post-apocalyptic survival and wouldn't nearly have the same impact as I Am A Hero achieves by giving time for the mystery and wonder to properly cook our anticipation. Even if you don't like this middle sequence, you can't dismiss it as filler.

The second half of the third omnibus immediately becomes more engaging than the first. Confronted by these tougher undead that are more bullet-resistant than most, Hideo & Hiromi have to strike on a new method to escape their clutches - zombie-wrangling! Trying to get the zombies to turn on each other is another ingenious twist on 'clumsy combat' that made earlier volumes so distinctive and honestly something that I've not seen before. It also sharpens the psychological edge of I Am A Hero with an opportunity to see an incident from a zombie's perspective - the strained, stupefied, surrealistic images of a recognisable but twisted world of mismatched sizes and perspectives, panels drawn in silence with no sound effects to give it a vacant, wandering, senseless atmosphere that relatably conveys a throbbing hallucinatory migraine that blots out comprehension.

The final episode of this omnibus has our heroes continue to escape the conflagration consuming Tokyo and rock up to... a shopping mall. There are dues that must be paid, after all. Nonetheless, I Am A Hero so far manages to avoid regurgitating the usual Satire On Consumerism that the mall represents and the survivors holed up on the roof seem to have a bit of nous about them - those making the oh-so-postmodern quips about not repeating the mistakes of the casts in schlocky horror movies need reminding that Scream beat them to it by over a decade, but I feel as though I can't criticise them too harshly as at the end of the day they are civilians who only have this sort of stuff to rely on for reference. While I half-expect there to be something sinister about the organisation of this survivor community - I mean, that's how it usually goes in these sorts of stories - I Am A Hero is keeping its powder dry so far, their leader is not stomping around in jackboots although he appears to have something of a morbid fascination with the zombies to give the reader a sense of unease to prevent him fully relaxing in the Safe Zone.

Overall I Am A Hero manages to keep up the momentum of its impressive run. Despite an intitial stumble, it hasn't succumbed to the infection and is maintaining a gripping pace at a fair sprint.

9
Despite initial impressions that it would be finally settling down to a more conventional zombie apocalypse it still surprises you with some novel curveballs.
COMMENT AND DISCUSS
blog comments powered by Disqus