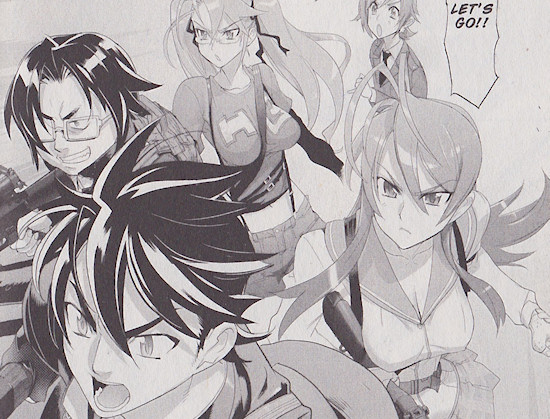 Despite all the love afforded both its manga and anime forms by many western fans, we're drawing close to the end as it currently stands of Highschool of the Dead - with the series having been on hiatus in Japan for over a year now, with seven volumes released, we're closed to catching up with its tale of zombie apocalypse and our brave band of high school survivors as they seek to find their parents in the ensuing chaos.

Regardless of this, volume six of the series finds us once again within the relative safety of a shopping mall - although "safe" isn't a word which can be ascribed to our group's location for much longer, as strife within the complex soon threatens to bring problems from outside while the mental strain of their current situation is proving to be difficult for some, not least young police officer Asami.

The good news for readers is that as a result of all this strife, we're granted a far more tense and action-packed instalment, with the need to flee from the shopping mall at the centre of it all.  In fact, there's little time to take a breather and even comic asides are mostly kept to a minimum as the group's plight is ramped up, and we're also treated to some decidedly poignant moments as difficult decisions have to be made in the name of progress and survival.

Although the story shifts back and forth throughout the latter stages of the volume in particular, using flashbacks to tell a pivotal part of the story, everything just about holds together to make for one of the better volumes of Highschool of the Dead, with a focus on everything that makes the series enjoyable but with any story-telling fat trimmed on account of having spent plenty of time on its current setup in volume five.  It won't blow you away with its story-telling, but its plot is solid enough and the accompanying artwork seems to get better by the volume to help things along substantially.

On top of Yen Press' usual production and translation values, this particular volume also offers some rather nifty additional content for fans of Highschool of the Dead.  For starters, there's a whole section at the rear of the volume dedicated to showing early character designs for the manga's various characters (including one who never appears in the finished product!), complete with comments from the series creators as to their decisions regarding these characters and both their looks and characteristics.  This volume also contains an interesting interview with both Daisuke Sato and Shouji Sato, performed by Full Metal Panic creator Shoji Gatoh - as you might expect, this contains some fascinating insights into the creative process for the series, including the immortalised admission that "99% of our e-mail discussions are about tits!"

These extras undoubtedly add value to an already enjoyable volume of this series, marking it out as perhaps the best instalment to hit our desk since those heady, break-neck days of volume one - although that gorgeous full-colour omnibus edition of the first four volumes has spoiled us, this is a great addition for anyone looking to keep up with the latest in this particular survival horror story.  Given its uptick in pace, it's all the more disappointing that we could be reaching the end of the road for the series in the very near future.

7
A good volume of the series, made all the more valuable by some great additional content.
COMMENT AND DISCUSS
blog comments powered by Disqus