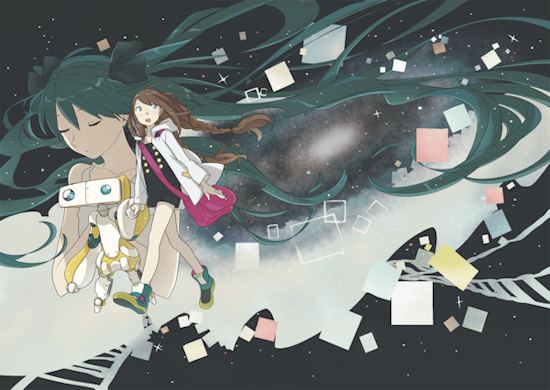 Most of you will already be familiar Hatsune Miku, who originated as a vocaloid music video character, but she is not actually the hero of this tale - so really you don’t need to know anything of Miku’s background to enjoy this manga.

This two-volume story, set in space in the distant future, follows a young girl called Asumi who starts the tale disoriented and clutching a hand drawn image of a girl she is looking for. She doesn’t know who the girl in the picture is, but we would recognise her as Miku! Asumi is discovered by Asimov – a cute robot who, despite being past his prime, continues to work as a courier and delivering packages to whichever planet they are needed on. These two become friends as Asimov takes Asumi across the galaxy in search of the girl in her picture – I know, it's somewhat a needle in a haystack concept, but they have their methods.

The result of this quest is a series of short and varied tales which tell of the pair's adventures through space as they search for a girl whose name they don't even know. They come across everything from a planet still in the dark ages with knights and princesses, to a planet of people addicted to drugs. On each planet they find a person resembling Miku, but it always turns out not to be the person they are looking for.

The huge variation in the stories keeps it really interesting, although I found that it moved on a bit too quickly from one scenario to another. I did find that this meant I had to read a bit slower than other manga as I had to concentrate hard on the ever-changing settings, characters and story arcs. In truth, the story would have been better served across three or four volumes to give it a chance to expand on each individual tale, however I guess the fast pace comes from the fact that the story originated as a serialised manga. I have read the story through twice and must have still missed something as I have no idea why it’s subtitled ‘Little Asimov and the green thing left behind’!

There is real heart at the centre of this story, as the two main characters develop a loyal and heart-warming friendship that becomes tested in times of trouble. Asimov, despite being somewhat peripheral in some of the stories, was the true star of the show – who doesn’t love an adorable robot character with a heart of gold? Along the way they end up helping a variety of characters who all face different problems, and these tales always contain something that readers can relate to. These stories are in no way childish, despite the majority of the characters being young, but there is also no explicitly adult content either so it has wide appeal.

The characters are really well defined and the artwork in general is great with excellent texture and display of emotion where needed. Although, as I said before, more time to expand on each scenario, visually as well as story-wise, would have made the book better. At the end of volume one there is a bonus section that gives you a bit of additional information on each of the planets visited, which is a nice addition. This would perhaps have been better following each chapter rather than lumped together at the end, and for some reason these extras were omitted from book two.

Don’t get me wrong though, while I have found a fair amount to criticise in these volumes, at the core is a great, original story with loveable characters that you really get attached to, with a great ending that gets you thinking and puts the whole tale into perspective! I think it would lend itself really well to an anime that could give each story more room to breathe.

7
A fast paced futuristic adventure with a few issues but a big heart!
COMMENT AND DISCUSS
blog comments powered by Disqus