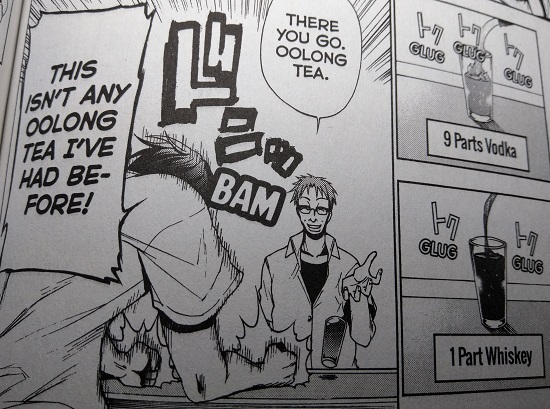 When I needed a part-time job at university I eschewed the typical route that my course-mates took of pulling pints in the bars and pubs and took the unusual decision of joining the Territorial Army. There were a few reasons for this: it would keep me fit and active; keep my mind engaged learning practical skills in the fresh and clean outdoors; in the generation before 'safe spaces' split campuses like the Berlin Wall girls still loved a man in uniform; and I thought that it would lead to a more restrained sort of life. With a soberly religious upbringing I had no confidence of being able to hold my drink and so naturally the precision drilling and sharp grooming required of the military manner would encourage a clean and upstanding routine, right?

Best-laid plans of mice and men… I’d have been better off behind the bar, where the landlord had stock control. I have some empathy with the Japanese salaryman who loses his family life to mandatory corporate socialising – even after a drill night was done if you didn’t have a regulation minimum of two cans in the bar afterwards there would be audible tut-tutting all the way up to the Colonel about your lack of espirit de corps and the poverty of your contribution to capital-M Morale. Initiation ceremonies, boat races, dirty pints, centurion, shoes, strawpedoes, ring of fire, the inviolable sacred laws of the Consuming Circle, friendly fives, and random tripwire cries of “NAKED BAR!” were all hazards to navigate like you were infiltrating enemy lines, with nothing but a tortuous interrogation waiting for you if you were captured.

So, Iori Kitahara of Grand Blue Dreaming, I feel your pain!

As Iori has just started university life as an engineering student on the Izu peninsula of Japan by the glittering Pacific Ocean. He has family there with an uncle who runs the Grand Blue scuba-diving centre. Iori’s looking forward to turning over a new chapter in his life and enjoying the coastal quiet with an industrious career to be fulfilled in – a dream which lasts all of thirty seconds because Grand Blue is also the meeting place for the university diving club which spends more time swimming in alcohol than the water. As soon as the club members catch wind that Iori’s a freshman, he’s doomed – dragooned into the club by these boisterous blokey boozers’ sheer dominating force of personality. The only question that remains is what’s going to give out first, Iori’s grades or his liver?

What follows is a long series of outright cringe humour – I’m baffled that the original Japanese manga has been going on since 2014 for eleven volumes now, because if they’re all like this then I don’t know how anyone could be expected to cope! The club are dropping trou on every other page (unmentionables obscured by black circles which oddly reminded me of the hilariously clunky censorship of violence in the Terrafomars anime, of all things) and overcoming Iori’s increasingly feeble protestations as they push him into ever more awkward situations and ritual public humiliations until all social consciousness has been comprehensively demolished. It’s a little reminiscent about Love Hina in how the girls have an uncanny sense to walk in just when the gyrations are at their most compromising… but you respect Iori more than you did that mildewing weed Keitaro because at least Iori for all his trauma is working out and pro-actively getting a few stories to recount when sharing the pork crackling someday.

And it’s relentless. Three-quarters of this manga volume is almost one unbroken drinking party lurching from incident to incident and it’s exhausting, I can’t read it all in one sitting (amusingly the cover is just a crop of a spread of one of these drinking sessions from the manga inside, with clip-art of the girls pasted on top to obscure the naked men). Frankly some of these practical jokes go beyond cheeky shenanigans and just become outright abusively cruel, in particular a sequence where Iori gets outright evicted from his student digs and forced to sleep in the utility room as the club members keep filling it up with porn posters and offending his room-mates; sophomore student Ryojiro seems almost manipulative in how he's constantly blowing hot-and-cold to bewilder his mark, at once berating Iori for being a boring sober square only to lambast him for his lack of dedication to sporting excellence once he's necked a pint in one. However, in the second half of the last chapter of the book the brakes are put on the madcap antics as Iori has a chance to go visit an aquarium with his cousin. It’s a calming, soothing sequence, and you appreciate its perfect positioning for how it gives you time to breathe and settle yourself down after the madcap helter-skelter merriment of the previous chapters and the sheer level of contrast emphasises its heartfelt sense of meditative serenity.

That Grand Blue Dreaming can generate such a sensation, despite what overwhelms it elsewhere is a reassurance that the manga’s not a one-trick pony. Even if it was though, it’s one with plenty of buck and kick in it – we’ve all read too many tediously pristine high-school manga where the pupils cannot drink (and by manga & anime broadcast codes need to be very specific that they’re not drinking if there’s ever any doubt – those rote reassurances that they’ve just got juice are actually mandated by law) with maybe one young female teacher who’s even more of a lightweight than me pathetically falling asleep after barely three chocolate liquers or just saccharinely ‘high on life’. The very fact then that a college-age cast can openly get wasted is an unencumbered rarity to cherish.  The aforementioned aquarium sequence does give you an opportunity to stretch out and appreciate the authentic quality of realistic environmental art that the manga can display, and with the constant male nudity you can’t fault the character art for its understanding of anatomy either! There’s room for less realistic stuff to, as Grand Blue Dreaming certainly gives Kakegurui a run for its money with gruesomely pulled faces.

I’m not sure that Grand Blue Dreaming is a title that I myself want to come back to as, for me, cringe humour tends to just make me… well, cringe. However, the rollicking rambunctious attitudes of the diving club have the irresistible energy of a rolling boulder with genuine real-world experiences that we can all relate to, whether we in our misspent youth just saw that boulder thundering by or were squashed like wine-grapes underneath it. In a manga industry dominated by isekai, mahout shoujo and all other sorts of fantasy and sci-fi, a down-to-earth frat house farrago is actually a breath of fresh air even if it smells beery. There’s something here to connect with any manga reader out of school andeven if it's not for me personally I’m sure that there is an audience out there that will get a lot out of it.

7
It's funny 'cause it's true.
COMMENT AND DISCUSS
blog comments powered by Disqus