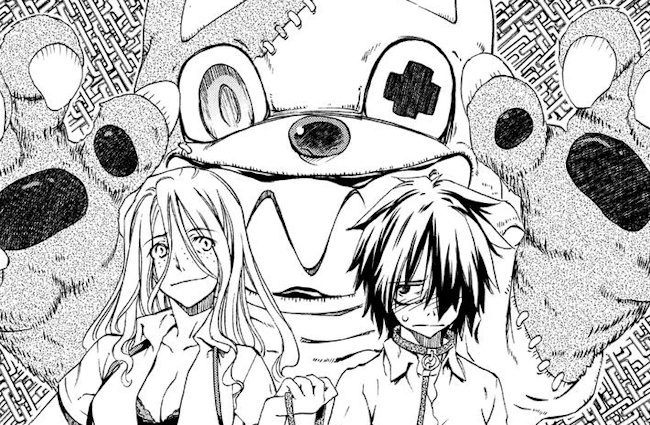 Gleipnir is the story of a high schooler named Shuichi Kagaya. He's smart, socially adept and a top student. He's also a monster, and as such he's hesitant to plan any future for himself. This isn't a problem for long, as a chance encounter with Claire Aoki, a sadistic, manipulative narcissist, has him embroiled in her schemes and suddenly his future is very much in her hands.

Honestly the opening few pages should show you enough to know if this manga is for you or not. It opens on a scene with a panty shot and Shuichi's hands wrapped around Claire's throat and lifting her from the ground. This is a manga that mixes sex and violence in equal measure, and as such it's anything but child friendly. I was actually quite surprised that the book hadn't been shrink-wrapped in the store.

This isn't to say that women are victims in this book - quite the contrary, they're strong, devious and very much in control. Claire is clearly aware of her charms, and uses them to her advantage in whatever way she can. The book does tend to overdo the panty shots on the girls, but it's clearly a book written to cater to the male gaze. However, Shuichi is no pushover and fully aware of the manipulation going on. One of the attractive qualities the book has is the constant power struggle between the main characters.

There are shades of Takeda's Haru to Natsu in Gleipnir - the idea of a strong-willed female antogonist making life miserable for her hapless vicitim is writ large in his previous work, where a young guy named Makoto asks out a girl to be met with rejection, only to be chased by her evil twin shortly afterwards. Needless to say, this isn't going to endear Takeda to certain groups.

However, I was drawn to the book by the awesome cover artwork - its bizarre, provocative and unusual, which carries through to the book itself. Claire, it turns out, has a sister that is equally afflicted by the curse of turning into a monster and she's on a mission to learn more and find her. Shuichi is a convenient tool. Takeda's art conveys a mix of insanity and allure with his perfectly drawn forms and manic expressions. There's also a heavy use of shading effects to create a feeling of depth, with panels expertly storyboarded to convey cinematic levels of drama and direction.

There's a great deal to commend the book for, but the content and violence will prove troubling for some, especially given the reaction to other series that have pushed the envelope recently. It's not as full-on as Goblin Slayer (what is?) but it's certainly more violent and anarchic than Rise of the Shield Hero. Adjust your expectations accordingly and perhaps give it a pass if this sort of content is not for you.

For those who like a bit of edge to their manga, you'll find it here. It's an adult tale with mature themes, artwork and ideas. There's certainly an audience for this title, and if series like Witchblade do it for you, pick up Gleipnir and I'm sure you'll have a blast.

8
Not for the faint of heart or easily offended, nevertheless the incredible art and imagination on display are undeniable.
COMMENT AND DISCUSS
blog comments powered by Disqus