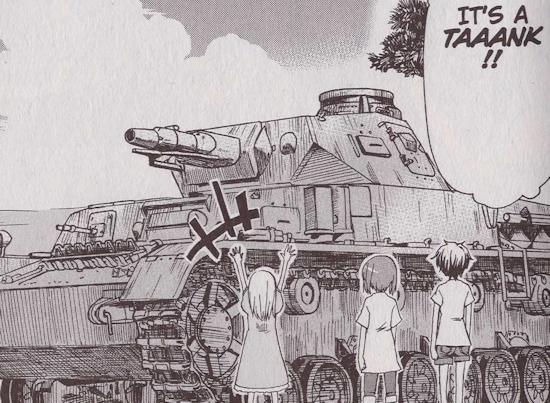 Long-standing readers of this site will know all about the love which pretty much all of our staff has for Girls und Panzer (largely because we won't stop going on about it), and while the mainstream manga adaptation of the original anime series has been an enjoyable curiosity in itself, perhaps more interesting to us has been the possibilities inherent in this short, two-volume spin-off manga, Little Army.

Rather than trying to extent itself beyond the original series, Little Army instead takes the opposite route of looking backwards, with its opening panels serving to frame the entire manga as a flashback for main character Miho Nishizumi as she thinks back upon her days at elementary school. While the series proper saw Miho trying to avoid the refined, ladylike sport of "tankery" and anything to do with it, things were very different during this period - conversely this younger Miho was brimming with excitement and enthusiasm about tanks, but she simply couldn't find anybody outside of her family to share that enthusiasm with. It's an understandable dilemma when you think about it - the prospect of driving a tank is daunting enough for an adult, let alone a little kid!

Just as Miho resigns herself to a school life of loneliness due to her having nothing in common with her classmates, so serendipity lends a hand and she finds herself becoming acquainted with Chihiro and Hitomi, two very different but friendly girls who have no interest in tankery themselves but who are at least willing to hear Miho out and give their new buddy's hobby a try. Even if their first foray into tankery ends in disaster, and leads them into conflict with another classmate in the moody Emi, it sows the seeds for an enduring relationship between the girls through thick and thin.

While Girls und Panzer itself is ultimately about the tanks and the sense of awe they imbue in people, Little Army is a far more human tale at its heart that just happens to revolve around tanks - in this first volume, we barely even see any of the vehicles in action, as the story is really all about Miho as she learns various valuable lessons around making, interacting with and keeping friends. The result is an enjoyable one - Little Army's original characters are hardly ground-breaking in terms of their personality or depictions but they all mesh well within the story as a whole; a story which is assured in the way it handles the kind of fractious friendships that are par for the course amongst children of the age in question with their ever-changing tastes and interests. The scene is also set for the second volume to tie more directly into the main series by delving more deeply into the events which cause Miho to lose her love of tankery - a potentially ambitious topic that we're keen to see fleshed out if done properly.

Also to Little Army's credit is the quality of the art - when tanks do put in an appearance they're rendered in impressive detail, while the wider world and characters are cute, expressive and ceaselessly pleasant to look at in a way which also manages to closely match the style and designs of the original anime series. This pleasing aesthetic is backed up by a solid translation and layout for this volume, as we've come to expect from Seven Seas' consistent production values these days.

For anyone new to the world of Girls und Panzer, Little Army really isn't a recommended point to jump into the franchise - it builds off of Miho's existing character, and without that prior knowledge to ground it we can only imagine that this first volume is far less interesting to read. Assuming that you do hold any kind of love for its source material however, this spin-off is a lot of fun - it builds out the personality and character of the series protagonist, adds some enjoyable original characters into the mix and delivers some simple but effective tales of youth that are closer to slice of life fare than the high-octane action of the TV series itself, but still serve their purpose admirably.

In other words, if you're looking for further adventures from the world of Girls und Panzer, this may not be exactly what you're hungry for, but it has plenty to offer in its own right.

7
An enjoyable side story that delves into Miho's past to create an enjoyable tale and original characters.
COMMENT AND DISCUSS
blog comments powered by Disqus