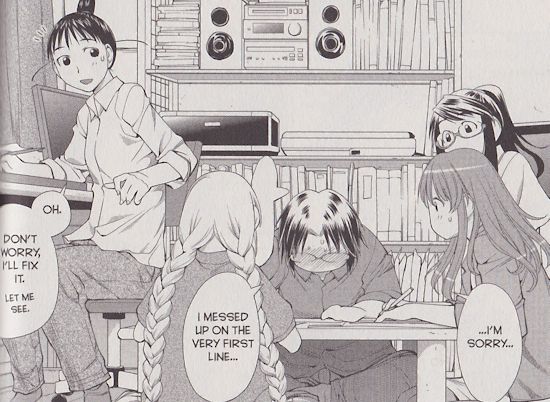 Although the archives of anime and manga are filled with self-referential manga for otaku, arguably none have taken quite such a devastatingly accurate view of both otaku culture and what it is to be a rabid fan of anime, manga and everything that goes with as Shimoku Kio's Genshiken.

Having almost perfectly captured its very particular culture the first time around in a way that has never been bested since, after a four year break Kio has return to the Society for the Study of Modern Visual Culture, aka the "Genshiken", to look in on what has become of the club since the original series came to an end.  With Chika Ogiue now serving as the club's president while trying to carve a niche for herself in the world of professional manga, we witness the Genshiken once again reaching out to try and attract new members as a new academic year begins - something which they succeed in doing, albeit not really with the results desired by Ogiue.

While the original cast of Genshiken was predominantly male, this second season sees the tables turned as the club finds itself inhabited largely by "fujoshi" - cue lots more discussions about yaoi and boy's love manga from all and sundry.  There is, however, one exception to this female-dominated realm - a boy who goes by the name of Hato, who is not only a rabid devourer of boy's love manga (a "fudanshi" in Japanese terms), but also a cross-dresser.  It's Hato's story that really eats up a lot of the time and discussions in this volume, as his new club-mates try to figure out exactly who Hato is and the reason for his particular proclivities - even when we're focusing on other characters, it usually boils down to their reactions and feelings about Hato.

In short, this is in many ways a very different series to the original Genshiken - don't get me wrong, it still revels in quoting or referring to recent popular anime series (Bakemonogatari and its follow-up Nisemonogatari get frequently nodded towards, for instance) and at its core it's still a slightly rose-tinted celebration of otaku culture, but on a different level it also feels like a more character-driven affair that wants to get under the skin of its new characters, who they are and why they've become this way rather than simply accepting them upfront and allowing them to bounce off of one another.  Luckily, even beyond Hato the other new characters are both believable and fun to follow around with some rapidly growing friendships and dynamics between them.

On the other hand, despite feeling very different to its predecessor, make no mistake about it - you need to have read Genshiken before you even consider dipping into Second Season.  For all of its new characters, there are still plenty of references towards, or appearances from, the "old guard" of the series, and if you aren't familiar with the likes of Ogiue and Madarame in particular then you'll quickly find yourself lost in a mire of unfamiliarity that won't be offset by the introduction of new characters.

Assuming that you are an existing fan of the original series, Second Season might not appeal to the die-hard Genshiken fans - it's moved a long way south of the territory occupied by its predecessor in some notable ways- but personally I feel like the series has found a refreshing new angle of the culture to which it's dedicated to mine at a point where arguably the series could have ended up stuck in a rut and exploited it until it was barren.  While the first series felt like a fond chronicling of experiences that will be familiar to many anime fans, Second Season is perhaps less so (for the average male reader at least), but it still has characters and situations that you can laugh at, empathise with or at least be curious towards, backed up with references that will delight the hardcore fan who understands them all and the return of some much-loved and genuinely missed old faces.

Speaking of those sometimes obscure references, thankfully all of these are chronicled at the back of the volume as part of Kodansha Comics' presentation of this volume - they all lose some of their impact by needing to be explained (and on a different page, no less), but the explanations are thorough enough to help with any gaps in the reader's understanding, while the overall translation throughout the volume is excellent and decidedly easy to read.  The more general presentation of the book is great and really allows Shimoku Kio's ever-improving artwork to stand out, although if we were to find some gripes in this volume it's that the choice of font makes occasional words difficult to make out (is that "A5" or "as"?), and also that the pages are tightly bound to the point where it can be tough to make out speech bubbles and text near the inner margins.  Neither of these issues are deal-breakers however, thankfully.

Given how popular and much-loved Genshiken is amongst the fan community, its return was never likely to meet the expectations of the enthusiastic masses, and as such Second Season can never hope to be what its predecessor was to a generation of those fans.  Then again, there's a very clear feeling in this opening volume that Second Season isn't even trying to recapture the magic of the original, and in those terms its journey into new territory is something to be appreciated; hopefully the series can grow into the setting it has created for itself to become an enjoyable and accessible work in its own right.  Even if it doesn't, I get the feeling its author will enjoy the thought that its merits and issues are being discussed in-depth by passionate fans at anime clubs across the globe.

7
New characters mean a sharp change in focus from the original Genshiken, which may disappoint long-term fans - however, there's still plenty to like despite this shift even if it can't hit the heady heights of its predecessor.
COMMENT AND DISCUSS
blog comments powered by Disqus