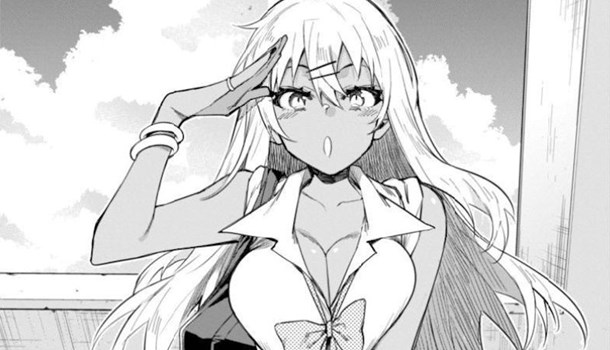 Yabe Shinji is a young teacher who wants to connect with his students, and Okazaki Miku (the school's number one Gal!) is the only student who needs his help. With grades so bad the headmaster suggests she just bribe her teachers with cookies, she enlists Yabe to teach her how to bake. However, it seems that Miku is interested in more than just his cooking skills, and Yabe has to balance his desire to be a great teacher with the (not entirely) unwelcome desires of his student.

This is one of those odd cultural distances between Japan and the West, where in one a romance between teacher and student is the basis of a sexy comedy, and the other it's more likely to be a headline in the national papers. As a Western reader I had to almost peek between my fingers at scenes of Yabe offering a piggy-back to his injured student while cupping her butt, and agreeing to go on a "field trip" with Miku which is clearly a date.

Yabe doesn't seem entirely unaware of the lines he's crossing, which makes what he's doing seem almost predatory - his student is 16, he has to be at least in his mid-twenties, so it's something you can either get over or you can't. Given the number of cases of teachers, male and female, doing serious time for fraternising with students in the real world, this is one of those rare occasions where I might concede this is justifiably beyond the pale for some readers.

For the rest, what's the book like? Surprisingly more sympathetic to the girls than I imagined. A "Gal" is basically a trendy airhead that dresses provocatively and flirts a lot. While Miku seems like a stereotype, it's revealed that she has a younger brother that she cares for, and her fellow Gals are equally caring and compassionate. That doesn't stop them groping each other and flashing the teacher, but it's better than nothing.

The artwork is excellent, with a good eye for panel layouts, sharp designs and expressive characters. It's titillating without being pure smut, so that helps too. The author has a good instinct for comedy, and remembering that the series is written and drawn by a woman helps alleviate some of the misgivings you might have - this fact alone shifts the focus from Yabe struggling with his urges to Miku's seemingly sincere crush on a man that refused to give up on her and takes an interest in more than her reputation. It doesn't make the book any more noble, but it takes the edge off a bit.

The first volume also includes the original one-shot story that spawned the series, and there's a lot of similarities - clearly the editor figured the basics were all sound enough to extend the story (much like Sweat and Soap) and the tastefulness of Gal Gohan will lie entirely on where they take things from here.

Were it not for the student/teacher dynamic, there's an awkward romance here that I can see being quite appealing. I'm still not sure I was entirely comfortable reading it, but as someone who has a daughter, my instincts are driving my reaction. On purely technical grounds, this is a capable, well drawn book with some good humour. The score is a difficult proposition here; it's a totally Marmite idea, so I'm scoring it right in the middle and you'll have to adjust the scale to suit your tastes.

5
An acquired taste, but technically proficient and the characters have plenty of life and vitality on the page. If you can get over the dynamic, this is a sexy comedy fantasy. But it's a big ask these days.

LATEST REVIEWS
I Have a Secret