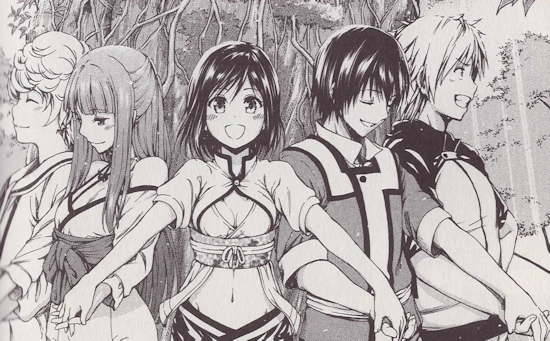 From the New World Vol. 1

We were rather taken with the anime adaptation of Yusuke Kishi's Shin Sekai Yori (aka From The New World) novel - it didn't always hit the mark, but it proved to be extremely competent at building its world and lore and then ensuring that its slow and careful build-up paid off significantly. With the series now also licensed in the UK by MVM Entertainment, it's something that we can look forward to watching again in the future, but for now we also have an opportunity to see how its story translates into manga form thanks to Vertical's release of the series.

Set in Japan's far-flung future, the "new world" in question isn't one of flying cars and inhabiting the farthest reaches of space, but rather one where humanity seems to have regressed somewhat, with a small populace and a simple style of living unrecognisable from our own 21st century existence. However, one area where the residents of this future Japan do have a leg up is that they all sport various psychic powers which allows them to manipulate objects and the like at will - abilities that sets humanity aside from the variety of other weird and wonderful creatures which are either subjugated by mankind or simply kept away from the confines of the town by barriers.

Our particular story is told through the eyes of Saki Watanabe, a young resident of the village who chronicles the tales of her youth - growing up, the emergence of her powers and the relief at their appearance, and her formative experiences in learning to use those powers. With the children of the village aware of numerous myths and legends about the creatures that reside within the world, it's hardly surprising that a camping trip outside of the village that is supposed to take place within a tightly controlled area sees Saki and her friends venturing beyond these confines into the wider world, which exposes them to dangers far beyond the stories they were seeking to validate.

As someone who is already familiar with From the New World's story via that aforementioned anime outing, the first thing that stands out about this manga adaptation is how quickly it burns through the early part of the story - rather than spending a lot of time building its world, it races through to get to "the good stuff" (more on what the manga has decided that entails later). This isn't a bad thing per se, and in places its faster pacing is welcome, but it also skips briefly over (or ignores entirely) important points that leave us with insufficient knowledge to really understand the society we're looking in upon. Yes, all of the really vital story beats are present and correct, but this volume's broader sense of place is shallower than it should be, and without the prior knowledge of the story I get the impression that the goings-on depicted here would feel less satisfying and easy to comprehend.

Where this first volume will really get tongues wagging (or possibly lolling from mouths) is in its sexual content. Compared to the austere outfits of the anime series, the female cast opt for far skimpier and more figure-hugging attire, but where the volume really stands out is in its depiction of the relationship between a pair of those female cast members, culminating in as explicit a sex scene as you're likely to find in a mainstream manga release. This is interesting on two fronts - firstly, it tackles head-on an aspect of the story that the anime broadly shied away from, that being the sexual proclivities and mores of humanity at this point in their history; secondly, it puts into sharp relief our previous point about this volume skipping important aspects of its world building, as without discussion these aspects of humanity's sexual mores these scenes seem like pure, simple fan service rather than an illustration of behavioural traits exhibited by mankind here.

This leaves us with an interesting conundrum - is this manga series trying to sell copies by titillating and arousing, or is it simply doing a bad job of fleshing out (with every pun intended) its world? Earlier in the volume we see a bath scene that is clearly just female nudity depicted for the reader's kicks, and coupled with the clothing choices of the cast we suspect the former, but if you're looking for an excuse to enjoy an (admittedly somewhat erotic) lesbian coupling in a mainstream manga then at least the latter gives you a good excuse for reading it on the train... not that we'd recommend doing that, mind you.

Mind you, any erotic reverie is soon washed away by the other aspect of this opening volume - a blood and guts depiction of the gruesome appearance (and equally gruesome behaviour) of this world's creatures, which pulls even fewer punches than its sex and nudity. In this aspect of its story-telling the opening volume of this manga is arguably a little stronger than the anime, with more detail afforded thanks to artwork that is really rather lavish and appealing throughout, and certainly more of a "them versus us" feeling to the creature's designs thanks to them looking further removed from humanity here.

It would be so easy to dismiss this opening volume of From the New World merely on account of its sexual content - after all, nudity and fan service often appear instead of narrative quality rather than alongside it. However, it would be unfair to label this series as such - if future volumes focus on sex over the other elements of its fascinating world than it may prove to be an accurate assessment, but for now there is certainly more to this first volume than simply cheap thrills.

It's a shame that the other elements of the volume aren't more measured and accomplished, which threatens to make this opening instalment a tough sell to those not already familiar with the story, but in spite of some early mis-steps it does feel as if its over-arching story is heading in the right direction, and its art style is suitably impressive even when it isn't letching over its characters a little too much. The jury is still out on From the New World in manga form, but as with so many series it's the second volume which may make or break its ability to deliver on the promise of the strong source material upon which it's based.

6
Its pacing is a little suspect and its fascination with sex over story may derail the whole thing, but there are enough strong narrative moments here to suggest a series that could come good given time.
COMMENT AND DISCUSS
blog comments powered by Disqus