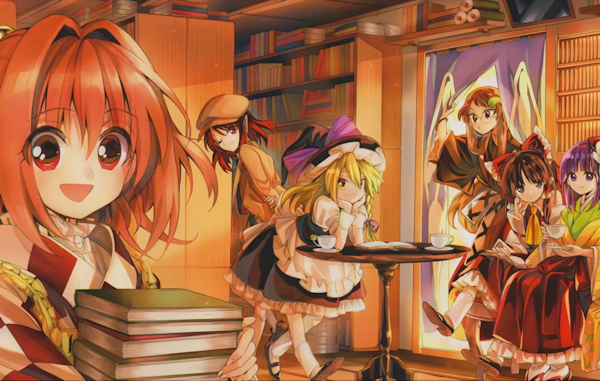 In the town of Gensokyo there is a bookshop that contains many unearthly tomes containing forbidden knowledge, ancient spirits and even guides to Hell itself. The Suzunaan store is run by Kosuzu Motoori, a young girl gifted with the ability to read even forgotten languages. Books can be borrowed or purchased by interested parties (which seems a little dangerous, frankly!) and so begins the story of Forbidden Scrollery.

The plot puts me in mind of Clamp's XXXHolic, with forbidden items causing problems for willing customers who discount the inherent risks. The artwork isn't as elegant, favouring a cuter, younger look, but the use of dark backgrounds creates the same sense of foreboding of Clamp's masterwork.The characters are notably more upbeat too, possibly due to the residents of Gensokyo all having supernatural abilities in one form or another. Kosuzu doesn't seem all that worried by the potential disasters her business could bring about, choosing to rely on local witch Marisa Kirisame and her Shaman friend Reimu Hakurei.

There are some issues with clarity in the book, with some panels either being very small or unclear in their intent. As such it took a few reads to ascertain the subtelty of what was actually going on at times. The characters are fun, but a little one-dimensional, relying instead on cute art to maintain the reader's interest. Some of the stories had neat little twists, and thankfully tales are short, making the book an easy read. It's just that what's here lacks any real depth and it was hard to maintain interest. The one major booster for the book is the Tanuki Youkai (spirit) Mamizou Futatsuiwa, who injects a little mischief and some much needed mystery in the second half.

All in, the book is a gentle if occasionally frustrating read that has some lovely character designs and a lot of thought given to fleshing out the myths and legends it tries to bring to life. Time will tell if the book becomes more than just a pleasant distraction, but certainly one to try before you buy.

7
Beautiful artwork frustrated by strange layout choices, but the tales within are pleasant if not especially gripping.
COMMENT AND DISCUSS
blog comments powered by Disqus