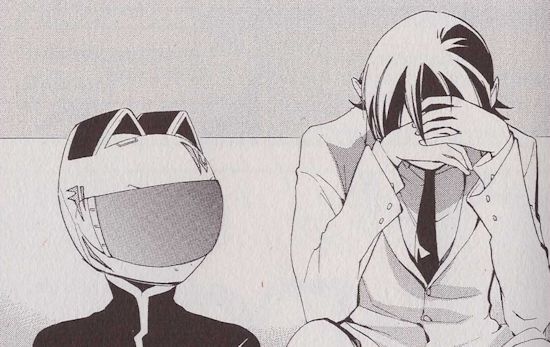 After its entertaining look at the sprawling (and slightly fantastical) world of Ikebukuro dropped off a little in terms of entertainment value in volume three, we return to bring the first full story arc of Durarara to a close in volume four.

Given the compelling quality of that previous volumes denouement regarding the origins and power of the Dollars group, this volume deals with the fallout of these revelations.  In particular, it's Celty's place in the world that really takes centre stage, as she discovers information about deceptions that hit decidedly close to home.  Elsewhere, other issues resolve themselves in the light of Mikado's actions as he also comes to terms with the position he's put himself in, while even bigger issues threaten to spring forth from everything that has built up during the climax of this particular story.

If the previous volume of Durarara felt a little light on content, volume four suffers from the opposite problem, that being that it has a lot of loose ends to tie up but not a huge amount of time (or pages) to do so.  This leaves the volume with little time to resolve everything and set up some of the story's wider plot points, which can make the whole endeavour feel a little rushed in places.  Luckily, the volume as a whole is still satisfactory in its resolution of various issues, and carries enough drama and emotion to keep the reader's interest even if you wish that a little more time was spent delving into some of its characters and their current situations.

In terms of artwork, Akiyo Satorigi's efforts continue to be passable rather than exceptional - everything on the page does a perfectly acceptable job of illustrating what's going on, but it isn't the kind of thing you'll feel any compunction to sit and marvel at, and if anything it feels as if the quality of the artwork has taken a step back with this volume.  For Yen Press' part, the translation of this volume keeps a steady hand on the tiller to deliver another quality release complete with (sometimes surprisingly informative) translation notes where required.

As a whole, this first arc of Durarara in manga form has been a satisfying read, albeit one that doesn't quite match up to the heady standards offered by the anime adaptation of the same story that many of you might have seen previously.  Although it carries a lot of the same energy and strong characterisation, its pacing isn't quite as even which in turn causes some of its big moments to have a slightly reduced impact.  Still, in lieu of the light novels getting an English translation this is still a good way to enjoy the series on the printed page, and provided that this manga continues on beyond where the anime adaptation left off (and that Yen Press continue to publish it in English) it could become a must-buy in the future to get your fill of the franchise's world.

7
Its pacing remains unsteady, but there is still plenty to appreciate in terms of both story and character as Durarara's first story arc comes to a close.
COMMENT AND DISCUSS
blog comments powered by Disqus