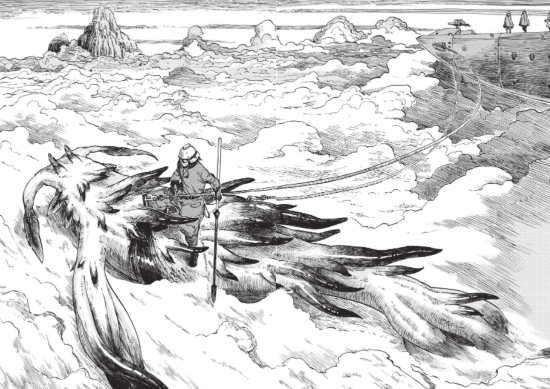 When is a dragon not a dragon? That’s not a usual sort of question, but it proves to be a relevant one when reading Taku Kuwabara’s 'Drifting Dragons' manga, coming to us from Kodansha. In fact you could argue that it’s the most pertinent thing about the book, particularly for a western audience in this day and age. As we float up into a world of thrilling adventure in the sky, just remember that some things are not what they appear to be if you look beyond the surface…

In a fantasy world, where dragons roam the skies, the most daring (and often shunned) people can join up with a skyship crew and go draking to hunt down the mysterious creatures for their meat and various other valuables they can provide. Our story follows one such vessel, the Quinn Zaza as it takes to the skies after elusive dragons, whilst fending off storms, strange new creatures and deadly sky pirates.

The tale presented here is a fun one, bringing to mind a more classical style of story of adventures on the high seas combined with a likeable cast, making for quite the page turner. Both our leads, the food-obsessed daredevil Mika and the new crew member (or ‘greenhorn’) Takita, are great fun and bring a lot to the table as they good-naturedly bicker through the various encounters the ship undergoes in the lead-up to the good meal and dragon-meat recipe that concludes each chapter.

The art is great too and gives off a similar feeling to classic Hayao Miyazaki work in Nausicaa of the Valley of the Wind with its slightly Western character designs and brilliantly stylised creatures and airships. The whole world presented here has a great feel to it which is pretty distinct amongst today's manga offerings. It looks undeniably wonderful and it makes the book a real treat to read.

However, there is no denying the dragon in the room! When is a dragon not a dragon? How about when it’s a whale? It doesn’t take long before anyone who’s paying attention to the proceedings realises what's actually going on here - this is a manga about whaling. The unique designs of the dragons are very reminiscent of whales and all the various trappings of the manga from the harpoons, the dragging of the carcasses to the ship before they sink and even down to the processes used to render the dragons into their desired components, which are all traditional whaling techniques transposed into a high fantasy setting.

Don’t get me wrong, I don’t get the feeling that there’s any kind of agenda here, rather it's just the case that Kuwabara found something that’s not typically represented in manga and used it to develop something that feels more original. There’s no denying though that once you click with what’s actually going on things do start feeling a bit weird thanks to the predominant Western attitude towards the practise of whaling. It’s like you just realised the new Star Trek was actually about fox hunting all along (though we wouldn’t say no to watching Burnham taking on the foxes role in the proceedings…).

Whether or not you’ll still be able to enjoy this is going to come down to personal preference and how much you can divorce reality from fiction. Again, I do not feel the manga is designed to secretly promote whaling or be some subversive anti-Greenpeace text. But you’re going to have to decide if the context is something you can live with through the course of the series.

If you can live with it then you’ll certainly find a lot to like here as Drifting Dragons is a great read that will appeal to a wide audience whether you’re looking for high fantasy, action or just a new cooking manga (one day someone’s going to have to arrange a Re:Creators style series for all these kind of manga in the vein of Masterchef).

7
An entertaining adventure with a darker edge to it.
COMMENT AND DISCUSS
blog comments powered by Disqus