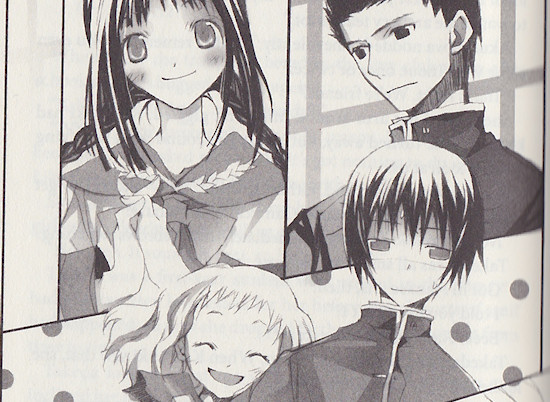 Following a ropey opening volume, the second novel in the Book Girl series, titled Book Girl and the Famished Spirit, seemed to succeed in taking a better grasp of its characters and scenario than its predecessor to deliver a far more gripping and emotionally charged novel.

Thanks to Yen Press we now have available to us an English language version of the third light novel in this series, Book Girl and the Captive Fool, providing us with another dose of the adventures of book-munching "goblin" high school student Tohko Amano and her friend, writer and fellow literature club member Konoha Inoue.  This time around, Konoha's relatively peaceful life of writing stories for his club president to devour and generally keeping a low profile is interrupted by a girl asking him to find out whether her boyfriend is seeing somebody else behind her back.  The boyfriend in question is a classmate of Konoha's named Akutagawa, and about the closest thing our protagonist has to a friend within his class (even if Inoue doesn't see him as such) - from fielding this girl's query which seems to suggest that Akutagawa is a bit of a playboy at worse, a far more dark and disturbing chain of events slowly come to light that sees several characters trapped by the memories of their own past in a way which is more than a little uncomfortably familiar to Konoha himself.

Melded into this angst-ridden tale of love, jealousy and self-harm is the school's culture festival, an event in which the literature club set out to perform a play using Akutagawa, Chia Takeda (a major player in the first novel) and Nanase Kotobuki to bolster their numbers.  While rehearsals for this play give some scope for comedy, relationship and character building, it also allows for a more than allegorical take on Book Girl and the Captive Fool's plot via the choice of work for the play in question, Saneatsu Mushanokouji's "Friendship".

It's the novel's links to literature where Book Girl and the Captive Fool really struggles to impress - as per previous novels, attempts to describe a writer or their works sees the book temporarily turn into a kind of poor man's Wikipedia, with characters reeling off facts, biographies and commentary in an incredibly dry and unnatural style.  Yes, Tohko herself is supposed to be depicted as an incredibly knowledgeable girl in the field of literature, and admittedly some way of explaining the background and works which weave into the novel is required, but that doesn't stop these segments (of which they are many) feeling more like a copy and paste from some educational publication rather than a monologue from any living, breathing individual.

You could perhaps even argue that the close ties to "Friendship" actually dilute the story of Captive Fool itself - you almost get the feeling that the author isn't convinced that the novel's plot can stand up in its own right, and so "props" it against another work in an attempt to strengthen and deeper it.  This is a bit of a shame, as once you look beyond its descent into pointless monologues there are some great pieces of writing here.  The book's dark tone serves it well without ever allowing any brighter moments to detract overly from its main purpose, while the suffering of some of its characters is also well-realised much of the time even it stretches your suspension of disbelief with some of the situations it posits.

If you've grown to like Book Girl's characters and its brooding take on high school life and relationships (and you really do need to read the previous books to get to grips with this one), then there's really little change within Captive Fool to disappoint you - the series continues to feel stronger after struggling to make itself comfortable in the first novel, so provided you don't mind its frequent turns at being Wikipedia's literature section and you can handle the book's less believable plot points, this isn't a bad read at all.

6
Clumsy links to and descriptions of authors and their works aside, this is a dark but ultimately quite satisfying read.
COMMENT AND DISCUSS
blog comments powered by Disqus