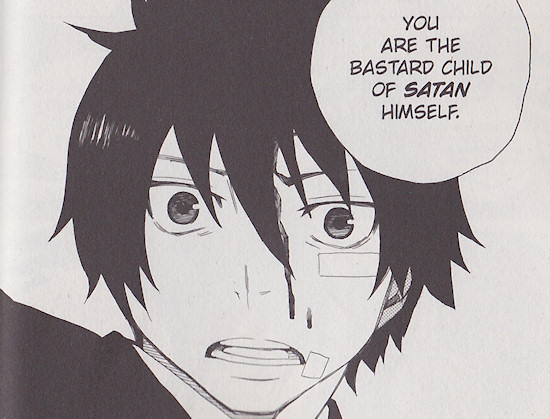 It's tough playing second fiddle to a smart, respectable younger twin brother, especially when you're viewed as something of a troublemaker in comparison.  If that isn't bad enough, imagine finding out that you're quite literally the bastard child of Satan himself to boot!

It's exactly this scenario which serves as the quick-fire introduction to the world of Blue Exorcist - it's opening volume progresses at break-neck pace from the story of two adopted brothers and their surrogate priest father into our down-trodden elder brother, Rin Okumura, discovering the truth about the identity of his real father and, furthermore, the demonic power inherent within him as a result.  With his surrogate dad killed in the ensuing chaos surrounding this revelation, Rin does what any angry teenager with daddy issues would do - swears to find his satanic father and wreak vengeance upon him.

The only way to carry out his revenge is for Rin to become an exorcist - a seemingly impossible task for a boy with demonic blood and a short fuse that makes controlling his power well beyond his means.  Indeed, no sooner is his true heritage revealed than do we see exorcists despatched to do away with Rin before he becomes too dangerous.  Luckily for him it seems that fate, and some intriguing characters with a very different view of Rin's potential, have come to his rescue and before we know it both Okumura brothers are enrolled (albeit in very different roles) within True Cross Academy, a kind of Hogwarts for exorcists.

It's here that Blue Exorcist really gets into its stride, throwing Rin into a class full of wannabe exorcists with disparate personalities, tossing them into the face of danger every now and then and building and shifting the bonds or relationships between the group as they go about their training and begin to partake in missions as part of that training.  All of this is, of course, left teetering on a knife's edge by the fact that Rin's true nature as a demon, and the spawn of Satan no less, has to be hidden from his peers - something which proves decidedly difficult as some factions seem hell-bent (with every pun intended) on provoking him while others simply want to see him dead.  Can Rin overcome his literal demons and learn to control his power to achieve his goal, and can he grow and protect his relationships with others in the process?  Rin isn't the only one carrying such a huge burden upon his shoulders, and subsequent volumes make full use of the manga's characters and situations to keep the pressure on not only Rin, but also his friends, comrades and brother.

I have to confess that the first volume of Blue Exorcist didn't really impress me - it rushed forward, diving into its big revelation without enough time to build its characters, and as a result I didn't particularly care about the early death of a seemingly major character or the shocking revelation of Rin's ancestry, nor was I overly fussed about his desire for revenge or the peril of his situation.  This didn't seem likely to improve as new characters were introduced, as the series was still a long way from getting its claws into me.

Despite this, I persevered, and in retrospect I'm hugely glad that I did just that - once Blue Exorcist succeeds in establishing the core of its character roster and moves us within the confines of True Cross Academy, things suddenly become far, far more interesting.  This school setting is admittedly a little cliché, but it does wonders for bringing out the personalities of its characters (Rin and brother Yuko included) and then putting those characters and their unique issues and situations to good use over subsequent volumes.  Put simply, by the cliff-hanger at the end of volume seven, I was well and truly hooked.

Once you push past that slightly clumsy opening, the balance of Blue Exorcist's story-telling is excellent - each story arc or side-story is well paced and timed, and the balance of action against exposition and character development is nigh-on perfect, thus far succeeding in not falling into any of the typical shounen pitfalls where individual fights or battles go on for far too long.  At this juncture, it's actually quite refreshing to see a shounen series that understands that there's more to telling a compelling tale than ever-escalating pitched battles, and this above all else is what marks Blue Exorcist out as a relative triumph in its field.

Visually, Blue Exorcist also succeeds in being great to look at, filled as it is with luscious backdrops and with plenty of excellent, striking character designs that ensures that each and every individual stands out sufficiently to ease the manga's story-telling path.  Our one criticism here would be that once things get busy within a particular panel or series of panels, it occasionally becomes unclear as to what's actually going on, which makes some sequences difficult to follow as they lose their visual "flow" - perhaps some simpler backdrops and clearer depictions would have alleviated such moments, relatively few though they admittedly are.  Along those lines, Viz Media's treatment of the series is good, with only occasional small translations notes where required and inclusion of some fun (and some decidedly unfunny) four-panel strips and other extras from the original Japanese volumes.

At the end of the day, the greatest compliment that I can pay Blue Exorcist is that I'm now impatiently sat waiting for volume eight to appear and resolve the story arc it currently has in progression - a far cry from my apathetic reaction to its opening gambit.  If you're willing to give this series a fighting chance, then you'll almost certainly find that it'll reward you in spades as it sets itself apart as a cut above other shounen series currently in print, both as a visual feast for the most part and a well-built story with great characters that you'll undoubtedly warm too once they're given opportunity to grow.

Now, roll on the summer and the UK release of Blue Exorcist's anime adaptation...

8
After a poorly-realised start, Blue Exorcist grows and flourishes by the volume on account of solid story-telling, excellent characterisation and strong visuals.
COMMENT AND DISCUSS
blog comments powered by Disqus