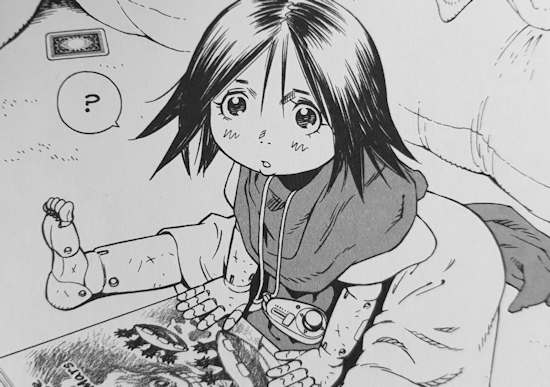 With Battle Angel finally coming to the big screen, what better time to revisit the world of the characters? However, Mars Chronicle is playing a risky game, being a sequel series featuring Alita (or Yoko in this story) as a child. Prequels are dangerous territory, often undermining the mystique of characters or answering questions in an unsatisfactory way. As someone who was not a massive fan of Last Order, I approach this volume with a wary eye.

One note before we start - I love the bronze-leafing on the very first page. It's a gorgeous little touch and really lends an air of quality to the book. Very nice indeed.

The story takes place on a Martian colony. A young, fully cyborg girl named Yoko is deposited, along with her friend Erica, into an orphanage by a kindly doctor. Immediately the two girls are the subject of bullying by other girls in the home, led by the haughty Ninon, a brat claiming a privileged background and exhibiting a mercurial streak.

This being a Battle Angel tale, it's not long before ultra-violence is unleashed, and the peaceful town is rent asunder by a military group searching for "a young girl". Whether this is Alita or Erica is unknown, but clearly one of them is the target.

The violence on display in this book was, to me, quite unsettling, not least because it features children being slaughtered in a number of brutal and unsavoury ways. Normally I wouldn't discuss potential spoilers of this nature, but I do think it's something you need to know going in. This is genuinely upsetting stuff and if you're of a sensitive disposition, my advice is to leave this on the shelf.

The stylistic tones are very much in keeping with Alita as you'd expect. The detail is typical of Kishiro's uncanny eye for design, and from the wheeled soldiers designed to tackle the mountainous Mars Terrain through to the apparatus which provides the atmosphere required by the humans living there, this is a terrifically well thought-out manga, and the forensic attention is key to selling the world in which the characters live. The artwork is exceptional, which makes the brutal slayings all the more affecting when you turn the page.

It does highlight an issue with prequel stories - because the characters featured will have no bearing on the tale already told, there's a feeling of disposability that is hard to shake. We know Yoko's ultimate fate already (depending on whether you follow Last Order or the original ending) and none of the characters here will reappear bar Erica in Last Order. It is interesting to see what happens between the two, and I can only hope it has more resonance than the debacle that was Obi Wan and Anakin's backstory in Star Wars.

Overall then, the spirit of Alita is writ large throughout this book, and for fans this is going to be a rich tapestry of the series history. For a master of detail like Kishiro, it will doubtless have plenty of nuggets that will cast new light onto the existing books too, and that's something I'll look forward to.

I do hope as the series goes on the author can limit the gory death toll to adults, as that's really the only issue I have here, but then Battle Angel has always been a series that lives on both it's fundamental humanity, and indeed the lack of it, to weave tales that are seriously affecting. Your mileage will certainly vary, but there's no doubt that the master is back with serious intent, and if you want to ride along you'll have to steel yourself - just like the young protagonist herself.

9
Disturbing and brutal, it's a story that oozes tension and features terrible things.

You can buy Battle Angel Alita Mars Chronicle 1 (and support UKA) through Amazon :)