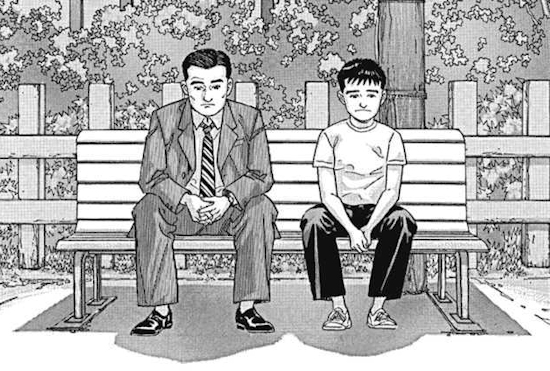 Hindsight is a seductive thing. It leads us to wonder “what if I’d taken that path instead of the other?”; “What if I'd asked that girl out when I had the chance?”; “What if I'd done more with my life?”

Now imagine if you had that chance to do just that!

This question is posed by A Distant Neighbourhood, a two-part manga series by four-times Eisner award nominated Jiro Taniguchi as its lead character, fourty-something workaholic Hiroshi Nakahara, finds himself falling asleep in late 1990s Japan – only to wake up not only in 1963, but also in his own 14-year-old self, with his adult memories and knowledge intact. After a short period of euphoria, and the chance to  enjoy life as a schoolboy again, he realises that not only could the opportunity be here to change history, but also a chance to solve a mystery that had plagued him for years... why was this the year that Hiroshi's father disappeared?

Like the Studio Ghibli film Only Yesterday, A Distant Neighbourhood (which was originally published by Shogakukan in 1998) inadvertently gives us a snapshot of two different time periods. Firstly, within the 1960s we get to see a post-war Japan in a state of transition, with traditional farming and cultural styles making way for more modern, western attitudes and fashions (at that time Japan was only a year away from hosting the Olympic games) and the resulting prosperity bringing hope of a better future for the people of Japan. In comparison though we see the Japan of late 1990s – a time of Japan trying to recover after a long time in recession caused by the bubble crash and struggling through high unemployment and debt to become a superpower yet again.

The writing for this series is told, in part, by Hiroshi himself as he monologues about events and sometimes considers the difference this childhood, with its relative freedom, compares to his stressful life as an adult. “Surely no one can truly become an adult”, to quote part of the series   “Deep in peoples hearts their child self remains, [but] because of time people are forced to act like adults, and the shackles we call maturity shut down the free mind of children”.

As for the artwork? What can I say about the artwork for this series? It's simply stunning is all I can say – with incredibly near-photographic artwork of Hiroshi's home town of Kurayoshi, both in the 90s and the 60s, in some cases you'll be spending as much time admiring the artwork as you will the story itself and in fact I could almost imagine myself walking along those same streets and locales, the detail being that thorough.

The only grumble I could lay on this series is the price tag – at £12.99 each these cost a lot more than your usual manga series, yet I felt that the writing and all round execution of this series is more than worth the extra price. A Distant Neighbourhood is one of those rare gems – a well though out, thought-provoking series that will leave you coming back again and again to discover more facets that you may have missed before.

10
A classic in the making and a definite must for anyone looking for a more mature manga series.
COMMENT AND DISCUSS
blog comments powered by Disqus