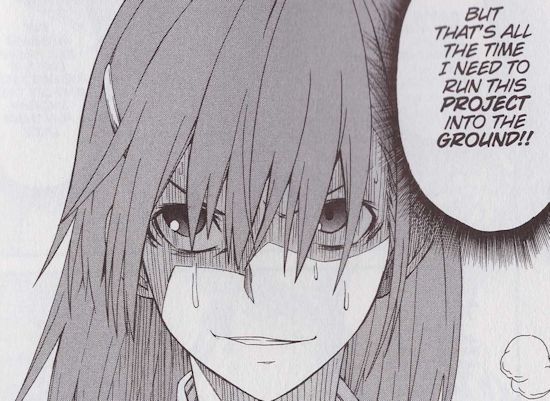 The fifth and previous volume of A Certain Scientific Railgun brought us perhaps the best that this already stellar series has offered us yet, pushing protagonist Mikoto Misaka to her limits and beyond as she seeks to put an end to experiments involving an army of clones born from her DNA.

As this sixth instalment begins, it seems as if normality has returned to Academy City from Misaka's perspective - there's time to goof around and hang out without a care in the world.  Such luxuries are quickly shattered as it comes to Misaka's attention that the project she intended upon halting hasn't so much as slowed down a jot despite her repeated and vicious attacks on its infrastructure; in fact, it's growing and progressing faster than ever.

Determined not to give in, Misaka continues to go it alone as she once again begins night-time raids against research facilities involved in the project - a path which only brings her more mental anguish ultimately.  Requiring a change in strategy, Mikoto instead decides to shoot straight for the top of the tree; or, to be more precise, Tree Diagram, the supercomputer which powers much of Academy City's more impressive technology and surely a key component in the research project she is trying to stop.  When shocking revelations leave even this angle of attack closed, an old friend appears to offer Misaka a very different solution to her problem as she considers the most drastic measures of all...

Having been so blown away by volume five, it feels almost harsh to judge this subsequent volume of the series against that particular water mark as it couldn't possibly hope to reach those stratospheric highs.  Indeed, this sixth outing doesn't reach the same level of jaw-dropping, gripping action or story-telling - but it still comes close, which is praise aplenty in itself.  Watching Misaka's world continue to collapse around her as the responsibility for the suffering caused by a project based around her DNA isn't always easy reading, but it is always compelling and occasionally gut-wrenching thanks to the artwork and the story as a whole pulling no punches.  Even in terms of the wider universe shared by this spin-off and A Certain Magical Index from which it originates, there are a number of major developments here that both catch you off-guard and draw you a little further into the story, and the focus on Misaka's relationship with Touma also works exceedingly well in a similar vein.  Needless to say, we're also hooked into impatiently waiting for the next volume via a tantalisingly juicy cliff-hanger to close the volume... and no, I'm not talking about the Haganai preview pages that you can find at the end of the book.

Visually, A Certain Scientific Railgun still works incredibly well - Motoi Fuyukawa proves adept at illustrating both personal emotion and grandiose action throughout the volume and bringing the story to life splendidly as a result, in a volume which also feels well translated from the point of view of this Seven Seas Entertainment release, in keeping with the rest of the series so far.

Although I keep expecting this series to trip over itself or lose sight of what makes it work so well at some point, A Certain Scientific Railgun refuses to budge from its place of one of my favourite manga series of recent years, and possibly of all time.  When it's running full-tilt through a story arc via volumes like this it's hard to criticise such an enjoyable blend of science-fiction and action elements, particularly when it's backed up by such a strong and emotionally resonant story.  In other words, if you still haven't started reading this series you really need to add it to your list for 2013, and soon.

9
Nothing can match the near-perfection of the previous volume in this series, but regardless this is another fantastically well written and illustrated piece of story-telling.
COMMENT AND DISCUSS
blog comments powered by Disqus