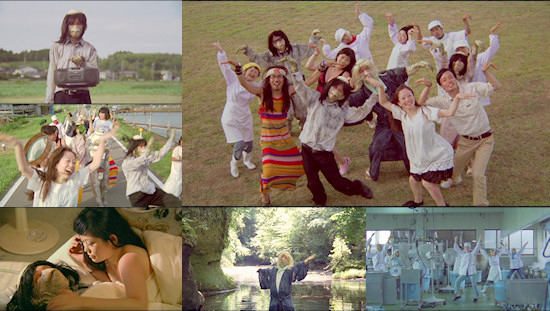 I have two things to admit here – firstly, I quite like musicals, and secondly, I don’t particularly like Pink Film. I’m aware I’m not winning any points in the cool stakes here, but nevertheless I was intrigued by the idea of a film that tried to mix the two genres. I’m sure most people are alright with the term ‘musical’ - though some might want to debate whether this counts as one in the technical sense - but Pink Film might not be so familiar to you. For those who don’t know, Pink Film (or pinku eiga to use the Japanese term) is really a catch-all term for a sort of soft-core pornography that’s more or less mainstream but shown only in specific cinemas. There’s no real Western equivalent, but I suppose something along the lines of the erotic thrillers that were popular in the eighties would be a close match (though generally without the ‘thriller’ part).

Underwater Love (Onna no Kappa) is the story of a soon to be married fisheries employee, Asuka, who discovers a kappa (a sort of supernatural turtle/man hybrid) living in the local pond. Not only that, the kappa turns out to be a friend of hers who drowned whilst they were both in high school. If you thought meeting a kappa was odd, you’d be having a really strange day to realise the god of death is also floating around, and he’s a hippy wearing a stripy dress. Of course the inevitable happens as Asuka and Aoki become closer, but a terrible event might be about to put a stop to things, the solution to which will involve a lot of personal sacrifices and an ‘anal pearl’. Oh, and singing… lots of singing and a bit of dancing too. This being a pink film, there’s quite a bit of sex in between.

Luckily for me, the pink elements are quite light. The sex scenes aren’t overly long or explicit and they don’t appear that often. Under Water Love has a definite storyline, so it’s not just a series of excuses to cut to a sex scene. In fact, the sex scenes feel a bit flat and out of place - this time round it’s these that feel tacked on rather than the story. One of the most interesting things you might learn from this film is that the male kappa apparently has a very large and somewhat odd looking reproductive organ - not that this seems to provoke any sort of reaction from the respective women.

When the people of this village aren’t busy having sex, they like to sing and dance. I have to say I loved the music - German band Stereo Total have come up with a great retro sound that sits somewhere in-between a sort of sixties alternative pop and German eighties new wave. The music is sung in Japanese by the band, overlaid onto the image (in fact most of the sound is non-sync throughout) and lip-synced by the cast. The only real problem is that the music was apparently produced early on in the project before some of the script changes were made. Therefore the songs quite often don’t have much to do with what’s actually happening on screen and don’t make a lot of contextual sense. For instance one song’s chorus ‘beat that lying kappa to death’ is happily sung by Asuka and a bunch of happy kappas in the kappa swamp. This makes absolutely no sense at all as no kappas appear to have lied or mistreated anyone and have, in fact, just agreed to help our heroes beat the god of death, while the kappa themselves are joining in the song with gusto.

Now, onto the dancing. After the first scene which is a really great ensemble number with everyone in the fishery dancing in sync with each other, you can’t really pretend there’s any real planned choreography gone into this. Most of the musical sections are just one person dancing randomly to the music, or occasionally just swaying. It’s quite cool in a new wave sort of way but it does start to get a bit wearing. However, the lack of effort sort of pays off in the overall feeling of the film, which has a quirky hip nonchalance to it.

In a similar vein, the kappas are just wearing turtle masks and stuck on scalps and shells. It’s quite obvious that they’re dressed up people but the bad prosthetics just fit with the absurdity of the film. It doesn’t matter that the costumes are cheap approximations; the sound is off-sync; the choreography is non-existent - somehow it all just works on its own terms.

Unexpectedly, Underwater Love is actually kind of a (bitter) sweet love story in the tradition of most movie musicals, albeit with an absurdist twist. The quirky humour and totally bizarre storyline are very entertaining. However, you can really tell that it was filmed in one take only over only five days and its low budget charms only extend so far. Despite its entertainment value it feels a bit too light and inconsequential to really grab its place in your heart, and there’s just something not quite there about it. Having said that however, ultimately it’s a really fun, interesting idea that’s worth eighty-seven minutes of your time.

6
A totally absurd soft-porn musical - great music, great fun but it ultimately fails to be anything more.
COMMENT AND DISCUSS
blog comments powered by Disqus