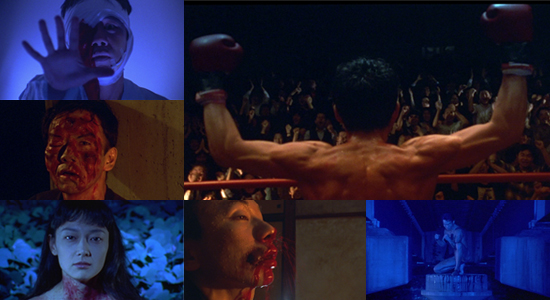 Following on from their excellent remastered Tetsuo set and the more recent Kotoko, Third Window Films have again brought us another classic film from the back catalogue of one of Japan’s most underrated auteurs - Shinya Tsukamoto.

Tsuda (played by Shinya Tsukamoto himself) is a hard working insurance salesman in mid-1990s Tokyo. He lives with a beautiful fiancée in a pretty nice flat and everything seems to be going pretty well for him, except for the fact that he’s been so unbearably tired lately. Then, one fateful day a colleague asks him to deliver some money to a boxing club (which sounds kind of dodgy in itself) where he’s spotted by an old acquaintance, Kojima (played by Shinya Tsukamoto’s boxer brother Koji). Though it’s clear Tsuda doesn’t wish to resume a friendship with Kojima, somehow he still manages to worm his way into his life. This unwanted intrusion from the past begins to deeply unsettle the civilised life Tsuda and Hizaru  had been living up to this point and sets them on a path of atavistic disintegration.

When you look at Tsuda at the beginning of the movie, it’s easy to think he’s ‘happy’ because the life he seems to be living is ‘normal’. He works hard, he lives with a woman he intends to marry and they seem settled and well matched. However, if you look more closely, you can see the cracks are all there even before Kojima turns up. His ‘tiredness’ is perhaps a symptom of the dissatisfaction he might not even realise he’s feeling with his boring, ordinary city life. When Hizaru, his girlfriend, asks him sensitively about his tiredness and suggests maybe he’s over-working and that she wouldn’t mind continuing to work even after they get married, Tsuda’s reaction is quite telling. He doesn’t say anything particularly, he doesn’t even argue, but it’s clear that he resents the suggestion and is clearly annoyed by it. This, and her subsequent comments to Kojima regarding Tsuda’s physique, further undermine his masculinity and you can see that even before the catalyst of Kojima’s arrival Tsuda’s mental state is quite fraught - his rage is already simmering quietly beneath thin layer of civility that is city life.

When Kojima finally does arrive, he does so like a pathogen. Infecting Tsuda first at the boxing club, then he brings him home (inadvertently) to his girlfriend who is then also infected with a new strain of 'individualism'. When Tsuda visits Kojima’s apartment to confront him about making a pass at Hizaru, what he finds is a lithe, glistening insect-like physical force. His movements are uncanny, seemingly too fast for a human yet slightly jerky and lacking in grace. Despite the fact that everyone at the gym thinks Kojima is a terrible boxer (even when he actually wins a fight everyone seems bored) he posses the physical strength to knock Tsuda not only across the room but through a wall. The exaggerated, manga-like violence only further intensifies Kojima’s total dominance over Tsuda. Hizaru looks on with a curious expression which seems part-way between wonder and disgust at Kojima’s increasingly bug-like appearance.

As a couple, Tsuda and Hizaru seem to have a fondness for watching old, subtitled European movies of an evening, such as Carol Reed’s The Third Man and Fritz Lang’s Metropolis. These are both films, of course, that have something to say about ‘the city’. In The Third Man, Harry Lime’s crimes are only possible because of the unique situation of post-war Vienna. In Metropolis, famously, the city is an organism worked by an underclass of slave workers who are little more than cogs in the machine. The city assumes part of your own personality, strips you of your individuality and replaces it with a job title. It numbs you to the finer emotions and the only way left to re-assert your existence is to open yourself up to pain. In Tokyo Fist, the city is of course Tokyo, but really it could be any city any time. Living in such a codified way etches away at your humanity until barely a husk remains, living out the day-to-day demands a city makes of its people. By the end of the film, the three central characters have been through an extended battle with this ‘city tax’, but whether the result is a death of the soul or a recovery is perhaps a matter for debate.

Tokyo Fist is certainly a very rich film which repays repeat viewings and is open to a great number of interpretations. Like his earlier Tetsuo: The Iron Man, the film often works on a purely sensory level and needs to be experienced rather than considered, but that isn’t to say it’s without plot or action. The fight scenes are intense and frenetic, captured in Tsukamoto’s trademark style, yet the boxing scenes do also have a very authentic ring to them. Tokyo Fist is a masterpiece of modern Japanese cinema that has long been done a disservice with a lack of a quality release. This remastered HD presentation from Third Window Films, supervised by Tsukamoto himself, finally restores the film to its rightful position with a truly outstanding Blu-Ray release. Tokyo Fist is a hugely intriguing and important film which richly deserves a place in any collection.

9
A neglected classic, Tokyo Fist is a rich and entertaining film which has been absent from the UK for far too long.
COMMENT AND DISCUSS
blog comments powered by Disqus