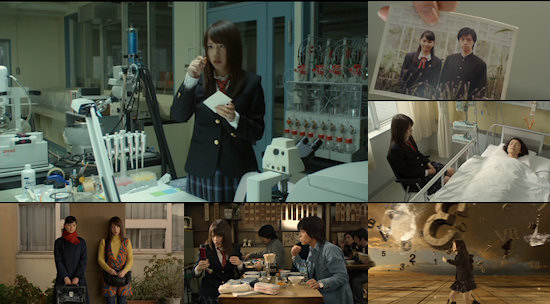 Time Traveller: The Girl Who Leapt Through Time

We don't get much chance to watch live action Asian cinema here at UK Anime (the clue as to why is in our web site's title), but given the opportunity to gather our thoughts on this 2010 movie which serves as a sequel of sorts to Yasutaka Tsutsui's much-loved novel, and a film that also has links to Mamoru Hosoda's own animated take on the story, we simply couldn't resist giving it a once-over.

The movie effectively follows on from the original 1967 novel (and the various dramatizations that have been based directly upon it) by positioning Kazuko Yoshiyama, the main character in that book, in modern day Japan as a scientist - rather a workaholic one at that, with a sideline in working upon her own pet projects.  Kazuko's life takes a turn as she's presented with an old photo of herself and a classmate from her school days - a photo which leaves her in a daze which eventually leads to her being involved in a traffic accident which leaves her largely unconscious but otherwise unharmed.  It's here that the mantle is passed on to Kazuko's daughter Akari (played by Riisa Naka, who also voiced tomboyish lead character Makoto in Hosoda's animated movie), with her mother imploring that she use a potion stored in her laboratory to jump back in time to April 1972.  Her mission: to inform the boy in the photograph, Kazuo Fukamachi, that their promise together still stands.

So, off Akari trots in the hope of completing this task restoring her mother to full health - only for her to end up in literally both the wrong time and the wrong place.  This leads her to drop in on (in a very literal sense) Ryota Mizorogi, a sci-fi geek and wannabe film-maker in 1974.  Thanks to his science fiction proclivities he's quick to believe Akari's story of her journey from 2010 and so, albeit slightly reluctantly, he does his bit to take her in and help her find Kazuo.  From here Akari's journey brings her into contact with some surprising faces as her past and present effectively collide head-on, although as the film progresses Akari's concern becomes more focused upon her affection towards Ryota, making for some difficult times ahead for this girl living outside of her own time.

It's immensely unfair to compare this live action film to its animated predecessor, as they both set out to do very different things with their premise and head largely in different directions as a result, with only one or two plot points even vaguely synchronising between the two offerings.  That said, I'm not a very fair person, and as a result I can't help but point out that Mamoru Hosoda's animated take on The Girl Who Leapt Through Time makes far stronger use of its concept than what we see here even if this film is taking its basic direction from the concepts of the original novel to weave its own narrative.  In contrast, Time Traveller prefers to simply dump Akari in the 1970s and the let the rest work itself out, to the point where a couple of its more important plot points later in the movie feel rather contrived and without a particularly believable "flow" to them.  As a result, you never really invest yourself in Akari's journey in the same way you do Makoto's - there are no important moral lessons to be learned or pondered over, in deference to straight drama which certainly has its emotional moments but never packs quite the kind of punch that you'd hope from it.

Shorn of that impressive direction and story-telling at its root, Time Traveller still presents a well-realised slice of 1970s life through the eyes of present-day Akari, with Riisa Naka giving a mostly solidly understated performance as the girl at the heart of it all as she manages to present her feelings towards Mizoragi in an ultimately believable fashion.  Where things begin to sag a little is in our feelings for other characters outside of this duo, as none of them are really fleshed out sufficiently to either grab your attention or pull at your heart-strings.

Ultimately, I don't want to be too harsh on Time Traveller - it's a brave move to even try and follow-up on a Japanese classic, and I don't want to give the impression that the film is an utter failure.  If you're a fan of the franchise and its concept then you'd certainly do well to check out Time Traveller, just be warned that it won't leave you with the same feeling that you've just watched a work bordering on simple genius as you do with Madhouse's 2006 animated movie.

Japanese audio with English subtitles.  Extras on the DVD consist of trailers for the movie and a film clip feature.

6
It doesn't come close to matching the quality of the anime, but there is entertainment to be had for fans of the franchise and concept.
COMMENT AND DISCUSS
blog comments powered by Disqus