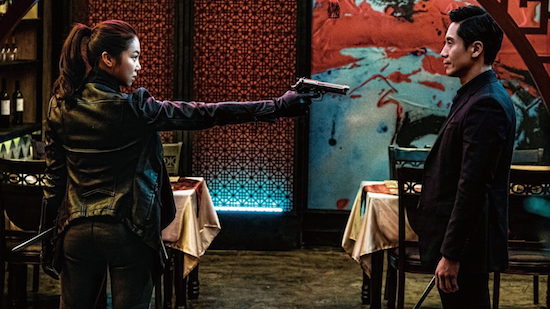 As a means of kicking off the London Korean Film Festival Programme Launch in style, this packed screening of Jung Byung-gil’s The Villainess certainly wasted no time in getting to the point. The film opens with an extended, immersive video-game-like fight sequence that is immediately reminiscent of a similar moment in that all-time great of Korean cinema - Oldboy. It offers up a dizzying panoply of high-octane motion and copious squirts of blood - all shown via at least ten whole minutes’ worth of first person camera-work. The only trouble? If you've already seen the same gimmick used for the entire duration of Hardcore Henry then it’s already lost a great deal of its impact.

And so The Villainess begins - starting as it means to continue - dragging us into a murky, noir-ish world of crime and cruelty as we follow the story of Sook-hee (played with deft precision by Kim Ok-bin), a female-assassin who has been indoctrinated since an early age in the fine art of killing. She becomes a sleeper agent for South Korea's intelligence agency, who keep her on-side with a distant promise of freedom after 10 years of service. And so Sook-hee sets to work.

Set out like this, the premise all sounds very neat and tidy. But the trouble is, in its aim to be more than simply a mindless action-thriller (which to be fair, it can certainly still be enjoyed as) The Villainess gets bogged down in overly-cerebral, disjointed backstory that seems to be desperately trying to cast it as a kind of chic art movie. On one hand there’s all the trappings of the classic revenge plot as Sook-hee circulates in a world of contract killing and taut action-set pieces - like a female-driven spin on the Bourne franchise. But then, halfway through, there's a particularly weird tangent where the film almost becomes a hammy rom-com date movie for half an hour as Sook-hee moves out of what amounts to assassin training camp and into a housing estate, only to find her neighbour is a hunky pretty-boy who may or may not have ulterior motives. It’s as if we’re experiencing a mishmash of about half a dozen different films, all clamouring to be heard above the din.

The violence and action is excellent, yes, but it’s served up in a kind of fragmented, greatest hits-style manner that serves to remind us that there’s little here that the likes of The Raid, John Wick or Kill Bill haven't portrayed in a neater, more concise manner in the past. That said, looking beyond the narrative flaws to the simple nuts and bolts of said violence, it has to be said that The Villainess handles itself with considerable aplomb. Quite aside from the jaw-dropping hand-to-hand combat work (which all feels satisfyingly real), there is some stunning sound design on offer here - bullets crack past with stinging impact, and blood squirts with a squishy wetness that’ll have you wincing in your seat. Look out for a couple of high speed road-based sequences, the first involving a set of motorbikes, the second a bus - which set a new high standard for breathtakingly intricate editing and camera-work. Trust us, once you’ve seen a three-way sword-fight conducted at 100+ MpH on motorbikes, Top Gear’s stunts will look like child’s play in comparison.

Special praise has to go to lead actress Kim Ok-bin, who - as Sook-hee - is an absolutely mesmerising on-screen presence throughout, even if her character does go through some bizarre tonal shifts (like the aforementioned rom-com style diversion). There is a real intensity to the way she perseveres through everything the movie chucks at her - you remain right there with her throughout, taking ever hit, every cut; feeling it in your gut just as much as she does. And yet, through it all, her eyes keep that same steely resolve - and in this passion at least, The Villainess stands as a fascinating character study.

The film needs this kind of solid, central grounding because - truth be told - the violence it serves up is endless, and at times, the movie itself feels endless too. You're never left twiddling your thumbs, but it just runs on and on and on... A never ending onslaught to the senses that batters and batters away in much the same way as a recurring sledgehammer that pops up in the movie itself as a particularly menacing weapon of choice. We’d argue that it runs overlong, but then - perhaps this bludgeoning sense of excession is the whole point? For what is ostensibly a fairly mainstream revenge thriller, The Villainess is a remarkably dense movie - with so many disparate threads pulled together and intermingled, it feels like you'd have to watch it at least three times to even begin to fully comprehend the complexity of its narrative arc.

All in all, when it comes to this kind of luxuriously sleek revenge thriller, Korea remains the absolute gold standard - nobody makes them quite like they do, and to such a high standard. And with films like The Villainess it's easy to see why. It's pure eye candy from start to finish, offering up a bounteous feast of hot actors and actresses, tension, action and nail biting violence. But it's also bloated - and for all that it’s easy to enjoy the film, it’s also easy to imagine just how much better it could have been if it was just a little leaner and cleaner.