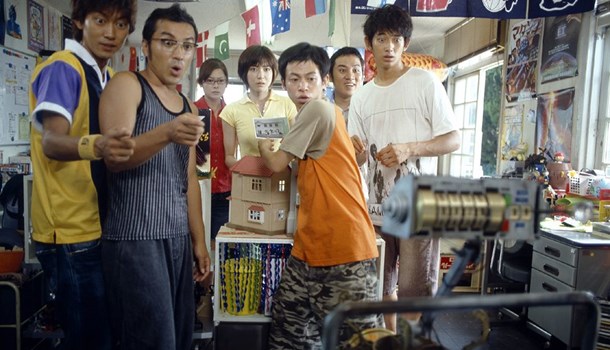 Proudly announced as "from the creators of Third Window’s recent and much-loved release of Beyond the Infinite Two Minutes", Summer Time Machine Blues (2005) has much to live up to, though with its own intriguing pedigree. Written by Makoto Ueda, responsible for penning not just Beyond the Infinite Two Minutes but Night is Short, Walk on Girl and Penguin Highway, it is also directed by Katsuyuki Motohiro, of Psycho-Pass fame.

It's summertime. Hot, sweltering, skin-searing summertime and members of the university Sci-Fi club have a problem. They’ve trashed a remote control, one that is the only means of turning on their air-con. Luckily, they find themselves in receipt of a time machine, so they can rescue it, unluckily, doing so could also cause the end of everything.

You can see in Summer Time Machine Blues the nascent concept for what would become Beyond the Infinite Two Minutes, as both films have elements sewn into their narrative that foreshadow future scenes, and like the students’ teacher explaining the perils of time travel, weave elements of complexity relatively lightly. That said, Summer Time Machine Blues hasn’t quite the same lucid intricacy that Ueda brought to his later film, but in part I think that is because Summer Time Machine Blues goes in for broader comedy. The longer running time also makes it harder for the film to fit together quite as delicately, though it provides plenty of twists as our protagonists from the club move through time. That said there’s little that is wasted in the film, every mention and reference, whether the mysterious Kappa statue or the apparently random meeting of minor characters, all make eventual narrative sense. Arguably though it can sometimes try too hard when pulling everything together. Some moments are inspired (the Kappa, for instance) but it can also belabour the need to explain: the ending which describes explicitly what you’ll already have inferred with ease is the worst offense, though the film tries to pay it off with a one-liner.

Still, Summer Time Machine Blues has a lot of fun with its premise, and you feel the players are all having enormous fun with their roles. There are numerous Easter eggs thrown in, too: the small cinema our protagonist Komoto visits contains posters for Back to the Future and the proprietor wears a Star Trek: The Next Generation crew top. The time machine itself is that described in HG Wells’ original novel and as shown in the 1960 film by George Pal. (Though ironically some of the Sci-Fi Club claim not to know what Sci-Fi is – they claim to be geeks but seem to do little in the way of actual Sci-Fi fandom, perhaps only attending as they share their club quarters with two women from the Photographic Club who have a dark room just off their club HQ).

Though originating from a play and with few locations, Motohiro’s direction never allows the film to feel stodgy and stagey, his camera frequently floating across rooms and through walls to keep up with the sense of energy as the club both risk then try to stop the end of everything in their madcap rescue. He keeps the film going at a good pace, though the first act you suspect could have been cropped as you can see it working its way up the eventual destruction of the remote control and appearance of the time machine. But nevertheless, it's all stylishly done with strong editing and use of sound to ground the audience in what’s to come with time-hopping and the concomitant confusions that must go with it.

Where perhaps the theatricality of the piece does become apparent is in the broadness of some of the support performances, which can often tend towards a more theatrical, over the top comedy styling which cinema doesn’t need because of its intimacy, and honestly is just not my thing (I’m more a deadpan kinda guy, thus loving the humour in ON-GAKU: Our Sound). Others will feel differently about that I'm sure, but this is balanced out by more natural, nuanced and yet fitting performances by Eita as Komoto, the one who more than anyone works to avert the end, and Juri Ueno and Yoko Maki as the two photographers that share the club quarters and recognise the geeks for what they are – especially terrible at baseball.

Whereas Summer Time Machine Blues doesn’t quite have the narrative tightness and brevity of Beyond the Infinite Two Minutes, you can see why it has become something of a cult favourite in Japan, with its youthful energy and the good-nature of its humour, not to mention its intricate plotting. It’s a film to enjoy when you want to forget the less pleasant elements of what is happening in the world and that is not something to belittle.

Genuine entertainment is hard to produce and Summer Time Machine Blues is definitely worth a slice of your time. 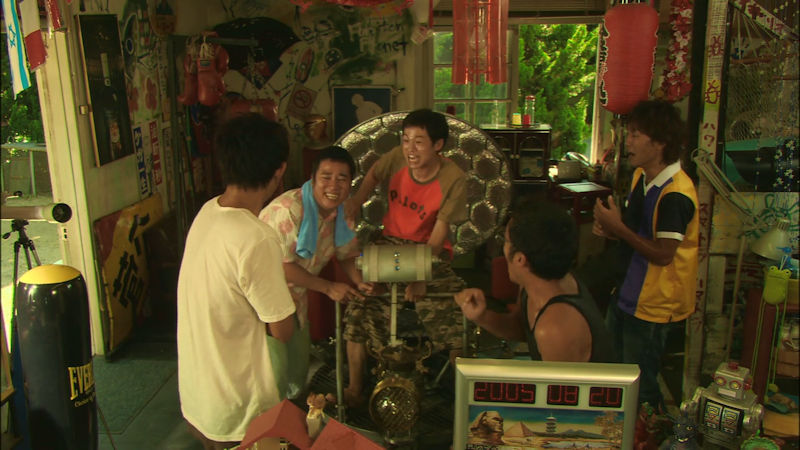