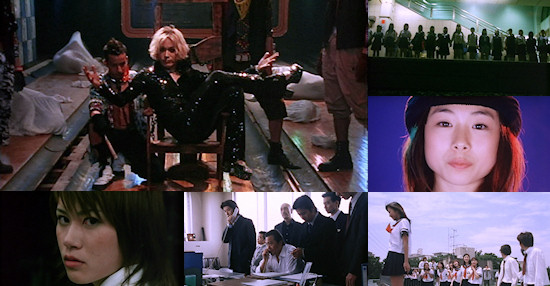 The rush hour at Shinjuku station; people rushing home from work or school, a large group of schoolgirls seems to congregate towards the front of the platform. Giggling and gossiping as girls do, they wait for the train home. However, as the train approaches, they gleefully line out along the platform’s edge. Ignoring the familiar warnings about the yellow line they join hands and joyously sing out one, two, three before throwing themselves en masse into the path of the oncoming train, their blood staining the station and the clothes and faces of unsuspecting bystanders.

Why... why did they do it? They don’t seem depressed, there was no protest involved, so what made fifty-four young women decide to end their lives in such a public fashion? The police sent to investigate the strange incident seem undecided on whether a crime has been committed or not - after all suicide is not illegal, but if these people were coerced or brainwashed in any way, then it’s murder and something must be done. A series of other suicides follow; it seems almost like a compulsion, for no discernable reason people are dying by their own hands.

Other strange things are happening; mysterious sports bags that seem to move about on their own conceal a grisly cargo. A tweeny bopper girl band (average age twelve and a half) seems to have taken the country by storm and everyone is watching them somewhat obsessively. An Internet hacker thinks she might have a lead on who’s behind all of this but her investigations are unexpectedly interrupted. A sadistic glam rocker with a yearning for fame sings love songs about death while women trapped inside white cotton bags are raped and murdered in front of him. Oh, and weird children who cough a lot open an enigmatic dialogue with the police. How can any of this be connected?

Connection seems to be one of the overriding themes of the film - one of the questions the strange child voices on the telephone repeat over and over is "are you connected to yourself?" This, to me, wants to ask if you are a whole person - is your essence or spirit etc connected to the you that’s walking around and doing things or has your true self had to be severed in order to conform.

Connection to others also seems to come under fire - people are so busy with the latest fad whether it's twelve year old idols, killing themselves and so on, that they don’t connect with the people around them. This is particularly true of the generation gap between parents and their children - one of the police officers investigating the case attempts to sit down and discuss the suicides with his children but is ignored in favour of the omni-present pop group on TV. Seeing that the whole family is happy, he decides not to press the issue. Similarly, one of the reasons they’re making so little progress in the case is that there’s a fundamental disconnect between the ageing policemen and youth, meaning that they don’t understand the technology and the pop culture that’s leading these young people to their decisions.

The film suggests that this lack of connection both to oneself and to others goes so far as to make life worthless and that, therefore, it’s relatively easy to abandon. Suicide itself is such a taboo subject in Japan you can see why this would be such a controversial topic to debate. Perhaps I’ve read too many nineteenth century novels, but trains are usually a stand-in for society, and the fact that these young people throw themselves beneath one could be read as an indictment of the way that society treated these young people. In this case, are most suicides really murders perpetrated by a cruel society whose need for conformity and pressure to succeed make people feel that they could never fit in or be good enough; one that didn’t do enough to help the people who needed it? It is possible to read the film as a condemnation of the harsher aspects of human society.

The film has a very absurd, darkly comic tone. Even when terrible things are happening they are often presented in humourous way and the entire film has an absurd surreality to it. It mixes several different genres - horror, mystery, family drama, even musical - but does not quite succeed in gelling them into a coherent whole with the result being that the film is fragmented and lacks clear narrative. The end of film is, perhaps deliberately, highly ambiguous and unsatisfying. It really does just end with absolutely no explanation of what we’ve just seen. This proves to be extremely frustrating - true it’s thought provoking, but not to give any explanation of the strange goings-on does leave the feeling of having missed something vital.

Sono presents suicide as a choice. Perhaps Camus' coffee/suicide conundrum hit the nail on the head - it’s all the same, just another decision. In the end however, the film wants us to choose life, to be a complete person, to be who you are and be perfectly all right with that. At the close of the film there’s a feeling that the circle has been broken, and indeed the final message from our chorus like girl band (whose name is constantly misspelt throughout the film) is one of hopefulness, that there’s a place for everyone, to ‘live as you please’.

Japanese 2.0 stero with optional English subtitles.  Extras consist of a trailer for the film and trailers for other Cine Du Monde releases.

8
A complex and difficult watch that will definitely cause offence to some, Suicide Club is a profound yet flawed and ultimately unsatisfying film. Nevertheless, it’s an important effort and its riches outstrip its problems by some measure.
COMMENT AND DISCUSS
blog comments powered by Disqus