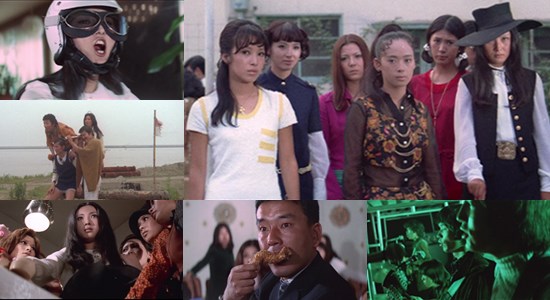 The late '60s and early '70s were a fascinating time in terms of Japanese popular culture, and cinema was certainly no exception. With studios becoming desperately worried by the rising popularity of television and a troubled political situation, they knew they’d have to find some way to bring back that all-important youth audience. Ultimately, they resorted to the time-honoured solutions of sex and violence to try and lure the increasingly disinterested viewers back to the cinemas. In the end, Nikkatsu would end up becoming a purveyor of soft core pornography, as its Roman Porno line all but dominated its production. The films from this era represent a kind of bridge between the youth orientated “Sun Tribe” films of the '50s and the full on exploitation films of the '70s. There’s no denying that in many ways they are very much of their time, which is generally a good thing, but the Stray Cat Rock films are an essential snap shot of a moment of counter-culture shift.

This new Blu-ray box set from Arrow films includes all five films in the Stray Cat Rock Series: Delinquent Girl Boss, Wild Jumbo, Sex Hunter, Machine Animal and Beat ’71. Perhaps “series” is a misleading way to describe the films as they’re really more of a “cycle”. There is no plot through line - each film stands independently with its own distinct story which appears to have no obvious connection with any of the other films in the series save sharing a certain sensibility (though even this shifts slightly as the films go on). The same actors re-appear in several of the films, notably Meiko Kaji who is most closely associated with the franchise, and Tatsuya Fuji who appears in every film, but even the actors who appear frequently are playing different (though often oddly similar) characters. What links the films together is their focus on what some might see as ‘low’ youth culture - bars, clubs, motorcycle gangs, drugs, drink and sex. What’s being sold, essentially, is a subversion of femininity - strong women who do not require the assistance of men but even take on male roles themselves, such as forming or running violent street gangs.

The first film in the series, Stray Cat Rock: Delinquent Girl Boss was intended as a vehicle for leading lady Akiko Wada and as a rival to Toei’s Delinquent Boss series. However, it was Meiko Kaji who became the breakout star of the film and a number of sequels featuring her were quickly put into production. The first film tells a fairly typical story of gangland warfare, albeit one with girl gangs, but the second, Wild Jumbo, takes a detour by telling a somewhat tragic tale of a group of students who plan to rob a mysterious cult - with tragic consequences. The third in the cycle, Sex Hunter, is the best known, perhaps because of its more complicated plot and engagement with racial politics. Apeing a western, a mixed race young man comes to town looking for his long lost sister and wanders straight into the gang war between Kaji’s female gang, the “Alleycats”, and the male “Eagles” lead by Fuji, who has a prejudice against people of mixed race as his younger sister was gang raped by a mixed race group. After this instalment the heavy sex and violence themes begin to fizzle out slightly and the fourth film, Machine Animal, is the most political of the Stray Cat Rock films as it follows a group of guys trying to dodge the draft for the Vietnam war, planning to fund their onward journey to Sweden by selling LSD. The fifth and final film, Beat ’71 takes this even further and replaces the ‘gang’ motif entirely with a story set around a hippy commune.

Always fairly liberal in tone (even if the characters meet a ‘bad’ end, the series feels more aspirational than morally critical), the Stray Cat Rock films present a world of hedonistic, counter-cultural youth. They’re full of the popular music of the time with long ‘live’ music sessions set inside the clubs, sometimes even prominently featuring popular bands and the theme song for Machine Animal, Gamble on Tomorrow, is even sung by Kaji herself. The earlier films are also filled with psychedelic imagery and interesting directorial touches like unusual split screens, blue screen cut outs, brightly coloured title cards, dissolves and freeze frames. However, Machine Animal marks quite a big change from the three previous films as the gang themes start to take more of a back seat to the politics and by Beat ’71, the tone of which is much more whimsical, they are pretty much absent. Films one, three, and four were directed by Yasuharu Hasebe while two and five were directed by Toshiya Fujita (Lady Snowblood), and there are some pretty clear directorial differences with Hasebe’s films being slightly more avant-garde and adventurous in terms of shooting style while Fujita’s are a little more classical. However, there might be something in the statement made by Hasebe in the interview included on this disc that by the end, the pop culture tone had shifted from violence to beauty - the more salacious content, and in particular the sexualised violence, reaches its peak in Sex Hunter and decreases as the films go on.

All five films were made extremely quickly and released between 1970 and 1971 - that’s five films made and released in under two years! Though the creative team may have envisioned them as low budget, fairly disposable cash grabs designed to give a much needed boost to a declining industry, the Stray Cat Rock films have gone on to have cult appeal which still has its devotees all these years later. Hugely enjoyable in their own right, the films are an interesting window into a relatively small period of time which nevertheless saw fairly massive changes taking place. Though they anticipate the trend of salacious exploitation that was to come, they stop short of some its excesses but were also to prove hugely influential in the history of ‘70s Japanese cinema.

8
Very much of their time, the Stray Cat Rock films are a psychedelic wild ride through early '70s Japanese pop culture.
COMMENT AND DISCUSS
blog comments powered by Disqus