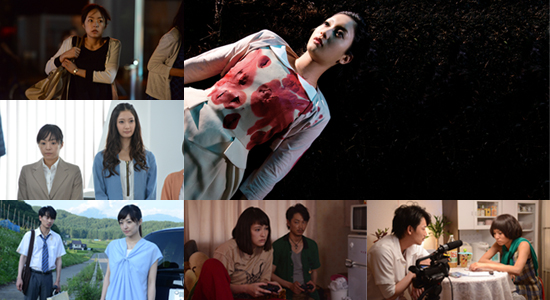 The sensationalisation of crime has been a mainstay of the tabloid press ever since its inception, and a much loved subject for gossips and curtain twitchers since time immemorial. When social media arrived, it brought with it many more avenues for every interested reader to have their say and make their own hideously uninformed opinions public, contributing to this ever-growing sandstorm of misinformation. Occasionally, or perhaps more often than we’d like to admit, these unfounded rumours have the power to ruin lives or push the accused person to a place of unbearable despair. So when the shy and put-upon office worker Shirono Miki becomes the prime suspect in the brutal murder of a colleague thanks some fairly convincing circumstantial evidence and the work of one would-be microblogging detective, the resulting trial by Twitter has a profound effect on her already shaky sense of self worth.

The body of Noriko Miki has been found in a wood, burned to a crisp after being viciously stabbed multiple times. Beautiful, intelligent and well connected, Noriko seems to have been well-loved by her colleagues, who are falling over themselves to praise her kind and generous nature, proclaiming disbelief that anyone would do such a thing to so good a person. One of these co-workers, Risako, happens to have gone to school with TV researcher Akahoshi (Go Ayano), a total Twitter addict who can’t keep anything to himself, and decides to give him the lowdown on the goings on in her office. Apparently the offices of the popular beauty product Snow White Soap was a hotbed of office pilfering, filled with interpersonal intrigue of boyfriend stealing and complicated romantic entanglements. Working alongside Noriko and Risako was another 'Miki', Shirono (Mao Inoue), who tends to be overshadowed by the beautiful and confident Noriko who shares her surname. Shy and isolated, Shirono seems the archetypal office loner and the picture Risako paints of her suggests she’s the sort of repressed, bitter woman who would engage in a bit of revenge theft and is possibly even unhinged enough to go on a stabbing spree. Of course, once you start to put something like that on the Internet, every last little thing you’ve ever done becomes evidence against you and Shirono finds herself the subject of an Internet-wide manhunt.

In some ways, the actual truth of who killed Noriko and why is almost irrelevant. In truth, the solution to the mystery itself is a little obvious and many people will probably have encountered similar situations, albeit with a less fatal outcome. Safe to say Noriko isn’t quite as white as she’s painted and the film is trying to wrongfoot you from the start by providing a series of necessarily unreliable witnesses, but in many ways that is the point. There are as many versions of 'the truth' as there are people, and once an accusation has been made people start to temper their recollections to fit with the new narrative they’ve been given. People who once went to school with Shirono instantly start to recall how she was a little bit creepy, even using evidence of a childhood fire to imply she was some kind of witch, obsessed with occult rituals to get revenge on school bullies. Only one university friend stands up for Shirono but, crucially, she is the first one to publicly name her friend and goes on to give a lot of embarrassing and unnecessary personal details which, although they help her case, are probably not very relevant. Even this act of seeming loyalty is exposed as a bid for Twitter fame as someone on the periphery of events tries to catapult themselves into the centre by saying “I knew her - I have the real story”.

Of course, things like this have always happened long before the Internet and social media took primary place in modern life - there have always been things that ‘everybody knows’ that quickly become ‘evidence’ as soon as someone is accused of something. Some people can cope with these accusations fairly well and carry on with their lives regardless. Others, like Shirono, are brought down in many ways by their own goodness. What Risako paints as creepy isolation is really mostly crippling shyness. Shirono is one of those innately good people who often puts herself last and tries to look after other people - like bringing a handmade bento everyday for a nutritionally troubled colleague or coming up with a way for a childhood friend to feel better about herself. These sorts of people are inherently more vulnerable to these kinds of attacks because they already have an underlying sense of inferiority. As so often happens, this whole thing started because Shirono tried to do something she already thought was wrong and of course it turned into a catastrophe which resulted in her being accused of a terrible crime. The person who manipulated her into this situation likely knew she would react this way and that’s why meek people like Shirono are the ultimate fall guy material.

Like Yoshihiro Nakamura’s previous films (Fish Story and The Foreign Duck, The Native Duck and God in a Coin Locker - both available from Third Window Films), The Snow White Murder Case is full of intersecting plot lines and quirky characters and manages to imbue a certain sense of cosmic irony and black humour into what could be quite a bleak situation. The Twitter antics are neatly displayed through some innovative on-screen graphics and the twin themes of ‘the Internet reveals the truth’ and ‘the Internet accuses falsely’ are never far from the viewer’s mind. It’s testimony to the strength of the characterisation (and of the performances) that Shirono can still say ‘good things will happen’ despite everything she’s been through in an attempt to cheer up someone who unbeknownst to her is the author of all her troubles, and have the audience believe it too. A skilful crime thriller in which the crime is the least important thing, The Snow White Murder Case might quite not have the emotional pull of some of the director's other work, but it’s certainly a timely examination of the power of rumour in the Internet age.

The Snow White Murder Case was screened as part of the Terracotta Far East Film Festival on Saturday 31st May 2014.

8
An engaging murder mystery that has a lot to say about the power of rumour and modern technology, The Snow White Murder Case is another unexpectedly moving examination of modern life from Yoshihiro Nakamura.
COMMENT AND DISCUSS
blog comments powered by Disqus