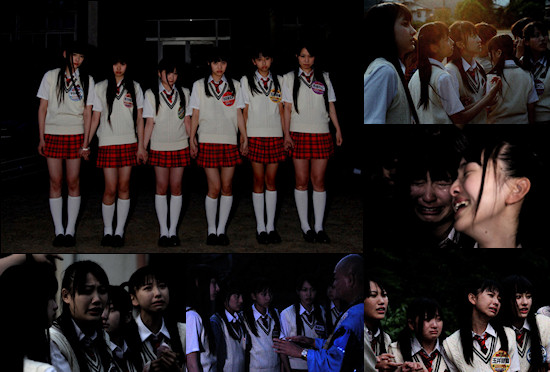 I don’t know about you, but I’m getting a little bit bored with the ‘found footage’ genre. As soon as you hear the term you know exactly where the film is going. How many times can you watch a camera fall in the perfect position to capture its owner screaming whilst being dragged off somewhere, before it fizzles out like a tired VHS tape? Shirome might be the perfect antidote to this - ‘found footage’ with the twist that everyone survives and becomes famous, mostly because the setup is a somewhat cruel practical joke being perpetrated on then unknown idol group Momoiro Clover.

Director Kouji Shiraishi is perhaps best known in the UK as the director of Grotesque, one of the few films to have been refused certification by the BBFC and therefore banned from the British home video market. Hoping to return to lighter fare, it was suggested to Shiraishi that he might like to make a film with the idol group his management company was just setting up. When he raised concerns about the girls’ acting ability, Shiraishi was advised to prevent them from trying to act. An idea was born, all the girls would be told is that they’re going to appear on a TV programme, and if it goes well they could win the chance to appear on the famous Japanese New Year TV concert.

Unbeknownst to Momoiro, the show they’ll be appearing in is a ghost investigation programme. Shiraishi plays the programme’s director himself and explains an urban legend to the girls about a white eyed spirit that can grant wishes but only to the pure of heart. If the person/people wishing have any doubts or aren’t fully committed Shirome will take its revenge; driving them to suicide or causing a fatal accident. If the girls ask Shirome nicely if they can sing on the New Year show they’ll be sure to get their wish!

The girls seem surprised but go along with everything anyway, until the special guest is wheeled in. A creepy ghost story teller complete with religious chant background music who then proceeds to tell them about two teenage girls who went to Shirome to ask to be best friends forever, but later turned against each other and did not survive their meeting with the spirit. The group do not react well to this, screaming and crying and asking for it all to stop. In the video diary sections it seems none of the girls actually wants to meet Shirome (especially the one who claims to bring ghosts home with her) but they all want to sing at New Year and have total faith in each other.

So as you can imagine, when they finally get to the abandoned school where they are supposed to express their desires to Shirome (through the medium of song) the girls are hardly prepared for what awaits them. To make matters worse the ghost story teller is back, much to the annoyance of the exorcist and psychic who have been brought in to help find evidence of the paranormal. Can the girls make it through the haunted hallways to find Shirome? Are they committed enough to survive their encounter with the ambiguous spirit? Given that Momoiro Clover (now Momoiro Clover Z) is currently a top selling group that might not be that much of a mystery but we’ll have a lot of fun finding out.

Yes, it’s all bit cruel and completely unethical but parts of this film are very funny. Momoiro Clover is your typical idol group in that the members are totally preoccupied with ‘cuteness’ - there’s a very funny sequence on a minibus where the girls introduce themselves and which role they play within the group. They also take every conceivable opportunity to sing, sometimes to combat their fear but often because they don’t seem to know what else to do.

I’m not sure what degree of acting is actually going on. Although they were apparently told nothing about the real intentions of the film, I don’t know if they were in a sense ‘playing’ themselves in the belief that the programme would eventually be shown on TV. It does seem strange to me that they all immediately agree to everything despite none of them really wanting to, even readily agreeing when the director asks them if they’d sell their souls to the devil in return for a spot on New Year’s Eve television. Perhaps they just trust the management company enough to do what they’re told and not really question it, but are superstitions really so prevalent in Japan that people would fall for the setup right away with no doubt at all that the spirit really exists and can grant wishes or inflict death? Mind you, one of the girls is already convinced she has a predisposition to possession and has previously been followed home by ghosts who pull her hair during concerts.

Thankfully, the group is informed at the end that they’ve been ‘punked’ much to their relief. However, strange events at their two year anniversary concert a little while later make us wonder if they’ve left the spirit realm completely behind. Has Momoiro Clover been cursed? One of the girls certainly seems to think so and her reaction to events is hilariously over the top. Whether she was in on this incident or had simply convinced herself that she was being attacked by spirits I’m not sure, but it was very funny (if a little cruel).

Ethically, there’s a lot wrong with the setup of this film. Poor Momoiro Clover are obviously being put through what they seem to be finding a terrifying ordeal for our enjoyment. Even if none of it was real the girls were still frightened and obviously distressed throughout, you have to wonder why someone didn’t stop it or why none of the girls simply refused to go on. I did also feel at times that I was laughing at them rather than the situation - not that I have anything against idol groups but they were dangerously close to becoming a self-parody.

Shirome is a very funny mockumentary horror film, albeit one you might feel bad about laughing at. It’s not particularly successful when viewed as a horror movie as it’s not very scary even with the supernatural effects added in post production for our benefit, but then it’s clearly intended as a comedy anyway. If you’ve ever thought that some of the acting styles in J-horror leant themselves to being, shall we say, a little big,  perhaps you should check out the supposedly natural reactions here. Though perhaps not a prime example of the genre, Shirome is a nice slice of the surreally odd which will please anyone who ever who’s ever wondered what would happen if an idol group really found themselves in a haunted house.

7
A hilariously entertaining horror mockumentary. The horror elements might not stand up in their own right, but this is film that will have you crying with laughter rather fear.
COMMENT AND DISCUSS
blog comments powered by Disqus