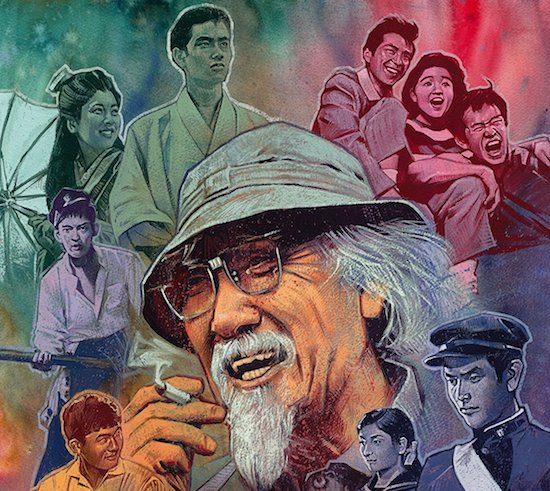 Something of a follow-up to Arrow’s excellent Nikkatsu Diamond Guys sets released back in 2016, this collection of five movies (four Black & White, one Colour) from legendary Japanese director Seijun Suzuki comes a year on from his unfortunate passing on 13 February 2017 and serves not only as another exciting venture into the treasure vaults of Japan’s oldest film studio, but also a fascinating glimpse at the formative years of a bonafide cinematic genius.

The first and earliest of the five films on this collection is also, arguably, the best. The Boy Who Came Back (1958) is a revelation of a find; featuring Nikkatsu regulars Akira Kobayashi and Ruriko Asaoka. Telling the story of hot-headed reprobate Nobuo, fresh out of prison, it follows his journey as he settles back into daily life, watched over by Keiko; a reform officer who’s part of a case-worker scheme called BBS - an acronym for the rather quaint sounding ‘Big Brothers and Sisters’ - designed to stop convicts from reoffending.

So far, so very Nikkatsu - a running trend over the films in this set is young male hoodlums with a heart of gold, tempered by a loving female hand. But what’s remarkable about this late 50s Black & White effort is the way it also functions as a powerful social document of late 50s / early 60s Japan. With Suzuki’s keen eye for the grittier side of life, the movie is unafraid to confront topics which would have felt electrifying daring at the time.

With Nobuo a far departure from the more clean cut heroes typical to other Nikkatsu action flicks, the violent encounters on offer here have a real bite to them, and every character is cast in shades of grey. Although the movie is very much Nobuo’s film, Keiko matches him every bit for screen-time, leaving you with the impression of a powerfully forward-thinking flick in which feminine screen-presence is every bit the equal to its male counterpart.

Conjuring up a glamourous flavour of a Japan in the throes of post-war modernisation, the movie is a blazing vision of happening nightclubs, sleek western fashion and big band music. Everything is cast in the glow of an achingly hip young person’s lifestyle - and while at times it might seem to overly indulge in its chic backdrop of crime, lovable rogues and love hotels, the movie also asks powerful social questions about the role of criminals in society, and to what extent they deserve another chance in a post-jail life. What’s more, just when you think everything is going to conclude in a rosy Hollywood ending with Nobuo reformed into a decent, upstanding citizen, his girlfriend is set upon by a crazed group of gang-bangers, whilst he’s beaten to a pulp and chucked back in jail. Suzuki, even back then, was clearly all about depicting life in all its messy, brutal ups and downs.

The next entry, The Wind-of-Youth Group Crosses the Mountain Pass (1961) is another real gem - and as the only colour effort included here, really shows the very best of the crystal clear restoration effort applied to all the films given the Blu-Ray treatment here. The colours pop from the screen with jaw-dropping vitality; the perfect accompaniment to a jovial, carnivalesque tale of a travelling magic-show group. With a bittersweet edge to its conclusion, an engagingly warm-hearted cast and an interesting mix of theatricality with low-key crime capers, the movie is a perfect blend of summer holiday thrills and a deeper, more involving romantic intensity.

Teenage Yakuza (1962), clocking in at around 70 minutes, is very much a B-movie effort - again taking up the mantle of low-key local crime as yakuza extort shops for protection money. With an impressionable teen wrapped up in the mix, the plot is roughly predictable - and initially seems to be the weak entry of the bunch, but manages to come good in the end with a thrilling showpiece fight-sequence at the end cast against some powerful symbolism of Japan’s continuing modernisation into the 60s.

For the next two entries - The Incorrigible (1963) and Born Under Crossed Stars (1965) - we see Suzuki turning to the historical Taisho period of the 1920s. In many ways, these films - a bizarre blend of wistful, elegiac romance and quirky, slapstick comedy - act as a dry run for his later Fighting Elegy (1966). Of the two, the former is definitely the stronger - what starts as a kind of 1920s Japanese spin on The Inbetweeners, all free-spirited youth and graphic tales of sexual exploits, soon morphs into a genuinely heartfelt and somewhat tragic love story. While your mileage may vary, this duo - both based on novels by the writer Toko Kon - do a good job of capturing the bohemian ‘end of innocence’ feel that is so beloved of the Taisho period setting.

All in all, the simple, B-movie genre-playbook feel of the films here at first might seem at odds with the more outlandish, surrealist feel Suzuki would go on to develop in the movies that arguably made him a cult favourite in the West, but on closer inspection, these early efforts already display clear signs of Suzuki developing a taste for raucous, slapstick violence, strong female roles and a firmly irreverent, tongue-in-cheek tone. Compared with the earlier Nikkatsu Diamond Guys sets, we’re still firmly in the territory of ‘disposable’ youth movies - but Suzuki is clearly trying his best to lend a harder, more socially conscious edge, as well as an eye for sharp, stylish cinematography.

Packaged with a bevy of extras, including an excellent 40-minute documentary from critic Tony Rayns on the movies, this set represents another real gem for fans looking to flesh out their collection with a few until-now overlooked gems from Japanese cinema’s golden years. As many others have pointed out - it’s all too easy to settle for the received ‘history’ of what constitutes the ‘must-see’ films of any country’s cinematic output, gravitating toward those films lauded with high praise or awards in following years, bypassing the populist genre material that was the bread and butter of audiences at the time. With fantastic collections like this, Arrow Video is continuing to go above and beyond in re-dressing that balance.

Extras include trailers, stills galleries, a Jasper Sharp commentary for Born Under Crossed Stars and a 40 minute Tony Rayns documentary on the movies.

9
A fascinating glimpse into the formative years of one of Japan’s greatest cinematic talents.
COMMENT AND DISCUSS
blog comments powered by Disqus