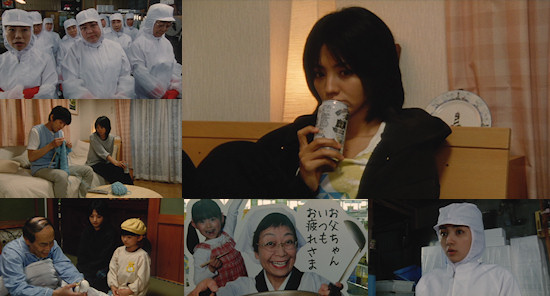 It’s Sawako’s (Hikari Mitsushima) fifth year living in Tokyo; she’s on her fifth job and fifth boyfriend. She works part-time as an office girl at a toy design company for a cruel and arrogant boss who regards everyone under him to rank among the no-hopers of society. Boyfriend number five also works at the toy company - or rather he did work there until resigning in order to live an ‘eco’ lifestyle (or was fired after his toy design was rejected by the toddler focus group, depending on your point of view). She mostly fills her time with her useless boyfriend, whose chief hobbies appear to be knitting, recycling and ignoring his young daughter, to whom he keeps referring to Sawako as ‘your new mother’, much to Sawako’s consternation. When she’s alone she’s mostly drinking copious amounts of beer in front of the TV news, which only seems to report on globing warming and parents killing their children. A call from her uncle in the town she left five years ago letting her know that her estranged father is seriously ill threatens to change all this. She’s adamant she won’t go back, and especially not now. That is until the useless boyfriend declares they’re all moving to the country to raise the little girl in an ‘eco’ way, and being just the passive person she is Sawako ends up being dragged back to the town she ran away from through no fault of her own. When she gets there she’ll have to face the disapproval of the community and eventually come to a decision about what she’s going to do with her life.

Sawako Decides is a cute comedy about learning to accept and even celebrate your own mediocrity. At the beginning of the film Sawako is the sort of person who just floats through life without much thought or effort, landing where the wind blows her and then waiting for the next updraft to present itself. Her personal motto seems to be ‘it can’t be helped’, she just accepts whatever happens to her with a fairly stoical disregard. She believes herself to be ‘lower middle’ and that therefore she has to settle for the slightly below average things like her steady but disappointing job and attentive but boring boyfriend. It doesn’t seem to occur to Sawako that she might be able to change things, advance  herself and be capable of something greater, or even to look for a better boyfriend; she just believes that this is her place in society so that’s that. Some of this seems to be tied to her appearance - because she doesn’t have ‘big melons’ she’s doomed to a life of drudgery, an opinion which her co-workers seem to agree with even if they think she could do better than a divorcee with a young child and poor career record as a boyfriend.

When she arrives back in her home town five years after leaving in an unorthodox fashion she has to face the disapproval and misconceptions of the local people, especially as she arrives with a young child in tow which most wrongly assume to be her illegitimate daughter. Her father’s ailing clam packing business is mostly staffed by fishwives, who as you might expect don’t have much confidence in this slip of a girl who ran away and disgraced herself. It’s in this hostile environment that Sawako finally finds a voice and decides for herself for the first time how things are going to be.

When she finally stands up for herself other people start to see something in her too and watching her begin to win round this ferocious pack of stalwart fishwives, making them believe in a possible new start for the company and then for the whole town, is quite charming. The new company song Sawako writes, celebrating their ‘lower middle’ below average nature that they intend to make the most of is absolutely hilarious, especially now with everyone enthusiastically joining in, in contrast with the old song sung by the administrator only while everyone else stood around looking bored or annoyed. Similarly, her growing relationship with the boyfriend’s daughter, who nobody really seems to have being paying much attention to, sees her finally taking responsibility for not only for herself but for someone else as well. Personal revelations too, such as realising she’s determined to marry her boyfriend not only out of practical resignation but perhaps annoyingly because she actually likes him, useless as he is, are quite poignant. The moments that these epiphanies occur are unexpected and often very funny given the incongruities of the setting and the reactions.

Hikari Mitsushima’s performance as Sawako carries the whole film - although Sawako seems quite unsympathetic or even pathetic in the beginning, Mitsusima manages to give her the right level of vulnerability to make the audience immediately sympathise with her plight. The idea of celebrating the average may seem quite a strange one, especially for those of us more used to the Hollywood formula of takeover the company, become best in word, then dump useless boyfriend in favour of better offer/marriage to the company before a hugely uplifting, inspirational finale; but Sawako Decides is anything but a conventional comedy. Surprisingly touching in places, the film is both a defence of the average and a tribute to those who just keep at it, day in day out. As Sawako says at the end of the film ‘I’ve no choice, so I’ll hang in there tomorrow too’. Well, won’t we all?

Japanese with optional English subtitles.  Extras are made up of an introduction and interview with director Yuya Ishii, theatrical trailer, and trailers for other Third Window releases.

7
An unusual and quirky comedy with an interesting message, Sawako Decides is anything but average.
COMMENT AND DISCUSS
blog comments powered by Disqus