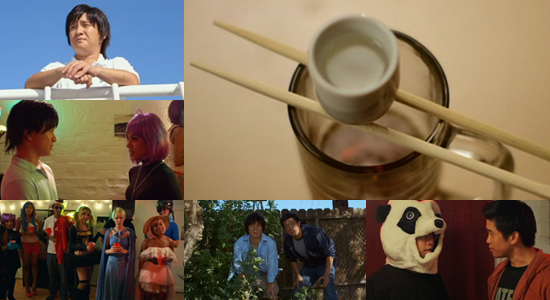 A Sake Bomb, in case you’re unaware, is the name of a popular drink where a cupful of sake is balanced on chopsticks above a mug of beer. The trick is to hit the table and upset the chopsticks so that the cup falls in mixing the sake with the beer which must then be chugged down as quickly as possible. This works as a fairly apt metaphor for Junya Sakino’s debut feature film which examines the cross-cultural relations between American, Asian-American and Japanese nationals in contemporary California.

In a quiet rural town in Japan, Naoto (Gaku Hamada) has just received a very special promotion - his ageing boss at the Sake brewery where he works (Den Den) values him so highly that he’d like to name him as his successor and leave the brewery in his hands from now on. However, he cautions him that he should also put to rest any nagging personal loose ends he may have, a suggestion which sees him jump on a plane in a desperate attempt to locate a former girlfriend who just upped and returned to America one day with no notice and nary a word since.

On arrival in LA he goes to stay with an uncle whose son has recently moved back in with him after being unceremoniously thrown out by his girlfriend after she caught him watching some dubious pornography. Naoto’s cousin Sebastian is something of a self-hating loser who seems to do little except upload videos to the internet where he rants about American stereotypes of Asian culture. Seeing as he hasn’t got anything to do, his father suggests Sebastian drive Naoto to the last address he has for his long lost love. Very much against his will, Sebastian ends up escorting his relatively naive cousin his quest little knowing that it will also be a journey of discovery for himself too.

Sake-Bomb seems like it has a lot of potential on the surface - a fish out of water scenario where a small town boy who doesn’t own a phone or know anything about computers or the Internet flies half way across the world to take a trip with someone whose whole life is online and already has a bee in his bonnet about American-Asian relations. However, it’s the more interesting implications of this setup that aren’t really dealt with in anything other than a superficial way. Sebastian rants online in a snarky way, debunking various commonly held beliefs about American-Asians which is hardly an original position for a V-logger and, well, he’s no Margaret Cho. He’s obnoxious, lazy, extremely crude, self centred and all but consumed by the depth of his own self loathing. In unguarded moments he can offer something by the way of insightful and well articulated commentary, but bar a very last minute bid for redemption it’s extremely difficult to pay attention to him. Any valid points that may come out of Sebastian’s rather foul mouth are instantly undermined by his own unpleasantness.

Other than that, the film sticks to a fairly conventional road movie format where the mismatched pair have a number of strange encounters as they traverse the roadways of California until they reach their ultimate goal. Of these, one of the most interesting is with a slightly creepy group who seem to identify themselves only as ‘cosplayers’ who are overly obsessed with Japanese culture and react rather over-excitedly to meeting ‘a real live Japanese person’. Some people might refer to this type of person as ‘weeaboo’ or ‘wapanese’ - neither of them very nice ways of describing someone but perhaps apt in this case. The group appear to be played for laughs - generally amiable, if misguided, and perhaps culturally ignorant for all their deep love of their hobby. Again, any more nuanced comment on the Western obsession with the perceived exoticism of the East is not to be found. Similarly, an encounter with a ‘racist cop’ comes across as a very mild joke as he expounds on loving Kung-fu movies and ‘oriental’ massages which is, without treating it lightly, skewed towards ignorance rather than malice.

Sake-Bomb does have its moments but largely the comedy fell fairly flat. It is possible however that many of its jokes play better to an American audience - there were certainly a few references that Sebastian made that left me just as clueless Naota and although I can’t say we don’t have such stereotypes in the UK it occurs to me that our own stereotypes are perhaps very different to those of America, just as our cultures are vastly different. Unfortunately the setup of the film can’t help but recall the excellent Kikujiro which sees gruff layabout Takeshi Kitano forced by his wife to accompany a little boy who’s decided to go off an adventure to find his long absent mother which sees an incredibly unlikely bond spring up quite naturally between the lonely boy and washed up old man. Unfortunately the bond never really snaps into place between Sebastian and Naota and although it’s true Sebastian has grown by the end of the film he’s still a tool. Gaku Hamada deserves praise both for his performance and for his proficiency with English but the film is too unbalanced to be supported by his performance alone. Sake Bomb shows a great deal of directorial promise but it’s let down by a sub-par script and some ropey performances - amusing at times but far from a must see.

Sake-Bomb receives its European Premiere as part of Raindance Film Festival on 28th September 2013 where it will also receive a repeat screening 3rd October. It has also been picked up for UK distribution by Third Window Films later in the year.

6
A promising first effort from Junya Sakino let down by a disappointing script, Sake-Bomb is intermittently amusing but ultimately fails to transcend its indie comedy roots.
COMMENT AND DISCUSS
blog comments powered by Disqus