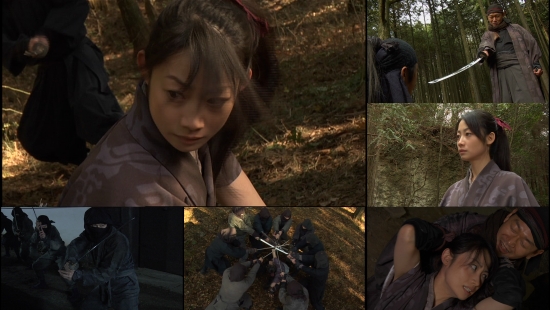 Oh dear… when you see a film called something like Rogue Ninja with flashy artwork like this movie, you know it can only go one of two ways. You’re either in for something brilliantly and unexpectedly off the wall awesome, or something that’s just not very good. Not even so bad it’s accidently fantastic, just not very good… at all. Unfortunately Rogue Ninja falls into the latter category.

The plot, for what there is of it, revolves around the conflict between the Iga and Koga Ninjas in sixteenth century Japan. The Iga are set to be demolished by everyone’s favourite historical bad guy Nobunaga Oda, which has led to something of a crackdown from the leaders and any minor infractions are being harshly punished. Inevitably a power struggle has broken out among the leaders of the Iga, so not only do they have to worry about Nobunaga and the Koga, they’ve got problems at home too.

Into this chaos is thrown a young female ninja, Ukagami (Mika Hijii), who wants nothing more than to carry on being a ninja for the rest of her life. Unfortunately this doesn’t seem to be a very usual thing and she’s constantly being asked if she wouldn’t just rather get married instead, much to her consternation. She’s also managed to attract the unwelcome attentions of one of the leaders, who constantly taunts her femininity – telling her to strip to fight because she doesn’t look like a woman with clothes on so it’s no fun; he won’t be beaten by a woman; ‘I didn’t have time to rape her’ (he says disappointedly); ‘For a woman…’ etc etc.

When the aforementioned misogynistic leader tries to kill Ukagami and kidnaps her friend to co-opt him into supposedly establishing some of kind egalitarian ninja colony, she has no choice but to fight back and defend herself and her friends.

I don’t mean to imply the film is misogynistic - the leader’s misogyny is definitely one of his bad guy traits; we know he’s bad because he’s misogynistic, that’s a very clear element of the film. However, it seems to me that the film is being sold as a sort of feminist epic, which I don’t think it is either. Ukagami might hate the way the leader treats women but it doesn’t seem as if she was prepared to stand up to it until directly threatened - indeed she seems a bit flattered when she gets sent off on the secret mission that turns out to be an ambush. I don’t think it’s so much that she’s standing up to her male superiors because she feels mistreated as it is that she’s directly threatened and is protecting herself. Earlier on in the film when she hears another woman has been killed she declares that she will ‘file a report’ - so much for taking action! In fact, her decision in the end seems to imply that she’s just fed up with the whole thing - not exactly a very revolutionary spirit.

This shouldn’t be taken to mean that this is a film with a serious political point to make either - it’s not, it’s just meant to be some good, clean ninja fun. In fact it’s a bit too clean, as there’s almost no blood. At the beginning of the film someone’s head comes off and it’s as if his ninja wraps go right through his neck, the head’s already bound up. I’m not someone who’s looking for a gore fest but there ought to be blood where blood ought to be or you start wondering why it’s not there.

That said, the fight scenes are quite good if slightly old fashioned and leaning towards the cheesy side. There are some very inventive moves that you don’t see coming and some very skilled choreography. However, they did go a bit overboard in the sound department a lot of the time, with lots of added whooshing, punching and weapon noises that don’t always seem to fit and ultimately just feel a bit much.

Rogue Ninja’s plot itself is quite dull and to be honest you’ll always be hoping for another action sequence soon to perk things up a bit. Despite the situation having a lot of potential for tension and intrigue, most of the non-fighting scenes just feel a bit like filler – there’s really not a lot going on.

In some ways this is just as well because the acting standard of the film is fairly low. What dialogue there is proves to be fairly straightforward and expository but it’s delivered quite woodenly. The only exception would be the actor playing Kimari, who’s name I don’t seem to be able to find as the credits aren’t translated and no casting information seems to be available for this film. Mika Hijii acquits herself very well with the film’s action scenes but doesn’t always seem convincing when it comes to acting (though it maybe unfair to judge with such an undemanding script).

As for the DVD itself, the image quality is very disappointing. I haven’t been able to find any information as to how the film was shot, but based on the DVD it looks to be low grade digital video. The image is very soft and fuzzy, and the colour palate is variable and often not naturalistic. The film appears to be very low budget so these problems may all relate back to the source material rather than a problem with this transfer, although having said that it’s not so far off TV quality so it’s not unwatchable.

Rogue Ninja is quite a dull film enlivened by some nice action sequences, but even at it’s comparatively short seventy minute run time it rather overstays its welcome.

Japanese 2.0 audio with forced English Subtitles.  As for extras… nada, we get chapter stops only here.

3
It’s not really anything; it’s just there. You’ll probably have forgotten it half an hour after it’s finished.
COMMENT AND DISCUSS
blog comments powered by Disqus