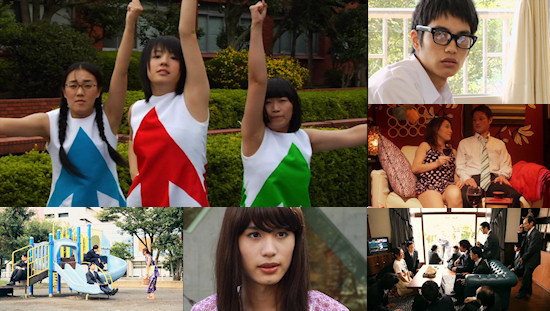 Quirky Guys and Gals is an anthology film consisting of four shorts connected only by the loose theme of eccentricity. Put together by The New Cinema Workshop, the film attempts to provide the experience of making short independent/student films within a more structured environment. Although the directors taking part have different levels of experience and previous success, they are all subject to the same budgetary and thematical constraints. What results is a collection of charming and yes, quirky, examinations of the oddness of everyday life.

The first film, Cheer Girls, is directed by Yosuke Fujita whose previous feature Fine, Totally Fine (Zenzen Daijobu) is also available in the UK from Third Window Films. The premise is simple enough; feeling sorry for a grown man who’s having some difficulty tying his shoe laces, the leader of a cheer leading trio decides they ought to ‘cheer’ for him to give him encouragement. Feeling pleased with the result, the girls (or at least their leader) decide they ought to use their cheering powers for the good of all mankind. However, perhaps the desire to spread joy to the world is masking a deeper personal problem, and when one of their cheer missions is completely misunderstood things begin to take a decidedly dark turn. As it turns out, you can even take something as innocuous as cheerleading a bit too far.

This is quite an absurd idea that’s pulled off with real panache. The girls’ sixties inspired outfits and the perfect choreography of their impromptu routines have a real fun quality about them. Even when things turn a bit dark the humour remains intact and we end on a typically absurd note where everything comes out alright in the end.

The second film, Tomoko Matsunashi’s Boy? Meets Girl is your typical cross dressing high school romance. Hopelessly in love with love with Kaori, an aspiring photographer who’s never even looked at him, Konosuke despairs and contemplates suicide. Luckily his slightly strange friend turns up just in time and offers to make him a bit prettier before he goes on his way. As a (frankly rather unconvincing) transvestite it turns out Konosuke (now as Miyo) is turning heads left, right and centre. How could any up and coming photographer resist?

This was probably my least favourite of the four as the subject matter is so well trodden; it’s been done before and done better than exhibited here. Having said that however, it’s still a nice whimsical tale of young love and the strange things people end up doing because of it.

Mipo O’s Claim Night, the third in the film’s sequence, is a very strange tale indeed. A woman comes home to find her electricity off, and put out by this inconvenience she rings the provider to find out what’s going on. For one reason or another they haven’t received her payment so she’s been cut off. The woman is a bit bossy and very unhappy with the level of service she’s been receiving. The operator on the phone tells her she’ll have to go into a shop and pay and then they’ll turn the electricity back on. A little while later the power seems to have been restored and a very contrite company man is offering his apologies. The woman is still unhappy as she had a nice piece of pork in the fridge with the date almost up; she was looking forward to Shabu Shabu today. She can’t have it tomorrow because she has to work, and the day after she’s getting her nails done so she’s out on dinner and the pork. Hearing this, the representative becomes agitated and rushes off. A few minutes later he’s back with a load of ‘premium’ pork and the rest of the contents of her fridge replaced with products from the high end supermarket nearby. Our no nonsense lady has no reply for this, so she asks the representative to maybe stay for some Shabu Shabu seeing as she has so much food now. Not altogether enthusiastically, he agrees, but later he’ll maybe wish he hadn’t.

Claim Night is maybe the least straight forward segment of the film, and I think perhaps a little bit of it is lost in translation. It’s still very funny though, as an evening spirals completely out of control and the limits of politeness are really pushed to the limit. It also has quite a kick in its ending that really does explain a lot of what’s gone before.

In the final film, The House Full Of Abandoned Business Men by Gen Sekiguchi, a woman out for a walk spots a neighbour who ought to be at work sitting forlornly on a park bench. Through being really inconveniently helpful she manages to get him to admit he’s lost his job and is avoiding having to tell his wife. Pointing out that if he sits out here all day he’ll get a tan and his wife will be suspicious, she suggests he come spend the day at her house. It’s a success and he decides he’ll go there every day just as if he were going to work. Why he really thinks “I spent the whole day in another woman’s house” is going to help when his wife finally realises the truth is anyone’s guess but the arrangement seems to be working out and, happy with her new acquisition, the woman begins collecting poor unfortunate former salarymen she sees abandoned on swings and children’s playgrounds throughout the city. This makes a lot more sense when you realise the woman used to have a stray cat habit until her husband put a stop to it. Curiously the ever increasing numbers of the recently unemployed begin to act in an almost feline way, stretching out on the floor, fighting, looking at the TV from odd angles.  How long can this bizarre situation continue?

The House Full Of Abandoned Businessman was my favourite of the four films because of its absurd premise. Watching an entire houseful of grown men fail to kill a cockroach whilst reproaching each other with cries like ‘you let the enemy escape’ was one of the funniest things I’ve ever seen.

The films can be watched either altogether as a feature, or individually from the menu screen. If you watch the feature version you get a cool opening/closing animation with some great music. If you opt for individually each director has provided a short intro for their film; they all seem very excited that people in the UK have chosen to watch their work. One of them even warns us that these are meant to be slightly odd people and if we have time we should visit Japan so that we can see how ordinary Japanese people live! All the directors are also interviewed in the supplementary features about their involvement in Quirky Guys and Gals as well as their career in general.

Quirky Guys and Gals is a collection of charming, amusing low budget short films that wouldn’t have found an outlet anywhere else. It’s lighter fare, yes, but very entertaining and everyone needs a bit of fluffy, quirky fun every now and then.

Japanese with optional English subtitles.  Extras consist of director interviews and introductions together with trailers for other Third Window releases.