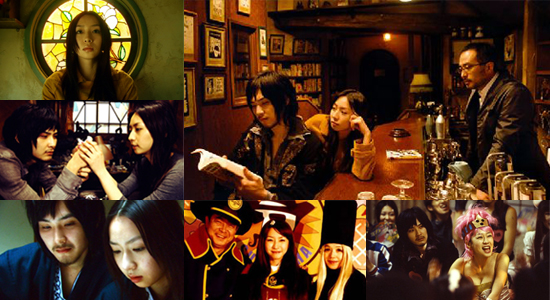 The word ‘otaku’ is a difficult one to pin down. In the west, it’s often come to be a badge of pride and respect, a label that many fans of what most people would perceive as a niche subculture actively identify with and eagerly apply to themselves. However, the roots of the term are much darker and in its native Japanese, ‘otaku’ can be far from a nice thing to call another person. Of the central couple in this film perhaps only one can be thought of as a traditional ‘otaku’, the other being more of a ‘tortured artist’ whose eccentric behaviour makes it difficult for him to survive in the real world. Well, to be honest finding a base line for ‘normal behaviour’ in this film is pretty tall order - we run into bizarre anime conventions, cosplay obsessives, broken hearted ex-mangaka (manga authors) bar owners and a bizarre cult-like office environment where the only rule is you must be 'happy!' all the time. Otakus In Love is an endearingly odd film that is jam packed full of in jokes and meta references that knows its audience very well and never fails in the humour stakes as a result.

Mon is a down on his luck - in fact totally broke - manga artist. Well, he calls himself a ‘manga artist’ but his work isn’t exactly what most people would expect. In a touch of the avant garde, Mon makes his manga out of rocks. Mon’s ‘manga’ are, in fact,  a collection of rocks painted with a single kanji character and arranged inside a custom made wooden box. Needless to say each of Mon’s works is a one-off piece and his sales record is not exactly going to get him on the best seller list. He can’t seem to hold down a part time either job due to his extreme reactions to people not taking his art seriously and his strange appearance, which is something like a seventies guru-cum-glam rock god whose ragged clothes have an oddly deliberate look to them. One fateful day he has an interview for Tsugino Happy Inc, which turns out to be a cult-like office environment which seems to advocate happiness through total subjugation. He lasts about an hour at this job before punching his new boss in the face for failing to appreciate his artistic qualities.

However, on the way there and about to pick up a particularly fine looking rock, he meets Koino, who turns out to be a colleague of his at Happy Inc. The two go out for drinks which ends up at Koino’s apartment, where upon Mon wakes up the next morning to find out he’s been a victim of forced cosplay! Unwittingly dressed up as Koino’s favourite character from Soul Caliber II, he’s quickly posed by Koino for her cosplay wall and dragged into a world of doujinshi, comiket, cosplay and all things otaku. Koino is an amateur manga artist who claims to have made a small fortune selling her home made manga at conventions and is well and truly an otaku. Can two such different people really find love? There’s only one way to find out!

Otakus in Love is based on Jun Hanyunyuu’s manga Koi no Mon (also the original Japanese title of the film) and as such carries over various extremely clever meta visual references. Directed by well-known actor Suzuki Matsuo (Ichi the Killer) the film is often about as close as you could get to being a live action manga, as Matsuo manages to make standard manga tropes like reaction shots and surreal action scenes work in a totally believable way. During the course of the film we’re treated to evrything from full on musical sections to ridiculous comic motifs that resurface at fairly predictable moments which could all end up just being far too much, but under Matsuo’s steady hand the film comes out on the right side of crazy and is never anything less than totally zany fun.

The film isn’t afraid to wear its otaku badge on its sleeve, either. Jam-packed with references from video games, anime, and manga, Otakus in Love gets its audience completely and trusts it to understand all of its allusions and homages without needing to repeatedly bash the viewer over the head with tie-ins. It also takes an affectionate side-swipe at fan culture with some bizarre interactions with cosplay, conventions and singers which any anime fan can probably relate to. The film also has a fair few cameos from such well known personages as Hideaki Anno, Shinya Tsukamoto and Takeshi Miike to name but a few.

At 114 minutes it does run a little long and occasionally feels like it’s going to run out of steam, but for the vast majority of its running time Otakus in Love is a genuinely hilarious and truly bizarre romantic comedy. Full of warmth and exuberance, it’s difficult to imagine anyone not being swept away by its surreal humour, and though it’s certainly on the broader side of comedy it never feels particularly over the top (or at least not in a bad way). Otakus in Love is a romanic comedy that no self -confessed otaku should miss out on seeing.

8
A little on the long side, but Otakus in Love is a hilarious thrill ride set against the backdrop of modern otaku culture. As close as you can get to live action manga, this film deserves to be seen by any self respecting otaku.
COMMENT AND DISCUSS
blog comments powered by Disqus