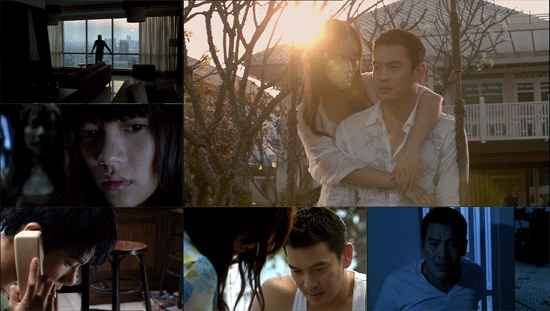 In a world where celebrity is king, Thai actor Ken is no exception. Men want to be him and women want to sleep with him. This is where his problems start - if it's not bad enough that he goes from woman to woman, the rest of Thailand also know about it too courtesy of gossip magazines.  Oh, I almost forgot to mention that this film is a horror movie, or at least it tries to be.

The film seems to unintentionally feel a lot more like a TV show than a feature-length film in every aspect of the film's production from musical score to cinematography. It almost appears like it's been filmed for a student project. There's nothing pretty about this film in the slightest aside, of course, from Ken's many women whom he jumps in and out of bed with.  This leads us onto the actual plot of this film, as word gets out in the press that Ken is with another woman. The media go into a frenzy, but more importantly so does Ken's ex girlfriend who begins to appear in his dreams as a means to get revenge before things escalate even further.

The premise of the film itself is not too bad, but it's simply the execution that makes this such a difficult film to enjoy. You can tell me the film is trying its best efforts to make this a tense and chilling horror, but put simply it falls flatter and harder with every consequent scene. It may well be down to the fact that all the characters are completely boring - I was expecting a lot more from the lead character, as with this kind of plot he would need to be the driving force. It's not his acting that's an issue, I feel as though it's the script that really doesn't allow any of the characters to really shine at all.

The make-up used on one of the ex-girlfriends is typical Asian cinema dead girl - don't get me wrong, it's tried and tested and more often than not it succeeds in giving me the creeps, but here it boils down to its execution. Scenes involve the girl's face coming at the camera fast; if that's the level of horror you appreciate then no doubt you'll find this delightful... not creepy or intense but delightful.

Although I have a lot of negative things to say about this film there's a scene that actually shocked me with it's content. Not to go into too much detail, but it involves a pregnant ex-girlfriend of Ken committing what can only be described as a home-made self-abortion. This scene really caught me off guard after feeling like I was watching a soap opera on TV for an hour before this bombshell is flung at the viewer. It's arguably worth hunting down this film for that scene alone!

If you're interested in lukewarm horror where not a whole lot happens, then you'll probably not feel too disappointed by this.  There are far better revenge stories out there and I know that for a fact you'd be tripping over better revenge tales in your local entertainment store. If you do choose to pick this up on DVD you'll be able to find it from the 8th October 2012, though no doubt you'll find this film as forgettable as me.

3
I'm hoping this film is like an ex-girlfriend, in that I never need to see it again.
COMMENT AND DISCUSS
blog comments powered by Disqus