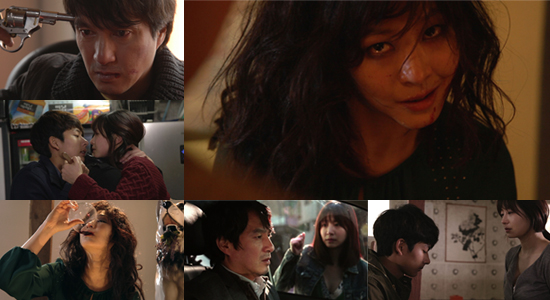 A Moebius strip is a twisted loop with no beginning and no end. No matter where you start your journey, you could pass the same point many times without ever crossing a boundary. It's this inexorable and infinite cycle to which Korean auteur and professional cage rattler Kim Ki-duk now turns his unfaltering gaze as the ancient wheel of sex, death and violence trundles on untroubled by our modern day pretences of a more enlightened society. Completely dialogue free, Kim presents a contemporary Greek tragedy framed as the blackest kind of satire.

Things are not going well in this quietly suburban, middle-class household. It’s not even breakfast time but the father has retreated to his study because the mother is already perched on the stairs, a large refilled glass of red wine in hand, and all while the bemused teenaged son looks on disinterestedly. This is a normal morning, nothing has changed very recently. Things are about to change though - quite drastically. Finally at the end of her tether and filled with a Medea-like fury, the mother decides to put an end to her husband’s philandering days by means of a kitchen knife. She is extremely drunk and half-crazed so her husband easily disarms her, at which point she comes up with another idea - if she can’t hurt her husband himself, she can cause him pain by proxy and takes the knife to her unsuspecting son’s room. Literally emasculated by his mother, the young son must then face difficult questions regarding the nature of his masculinity, particularly as it appears to others. His father in turn must cope both with the guilt of his own sins being visited on his son as well as that of his own behaviour as a father, husband and finally a man. Never one for easy answers, Kim Ki-duk’s examination of modern day Korean society continues apace, but its implications are far more wide reaching.

Though Kim is firmly focussed on his native Korea, the questions he presents are as old as the hills and common to almost every culture (at least to those that are also male dominated). It’s not the first Korean film where the successful father is having an affair with a girl young enough to be his daughter, or the first where the wife’s humiliation spills over into violence, but the nature of her revenge is so specific - and perhaps bizarre - that it brings its own particular line of discourse. The first question is one of traditional masculinity and how that is defined between men. The son seems to feel emasculated and looks for different ways to explore his manhood but is at pains that no one should discover the nature of his injury. Though he approaches the woman who had been his father’s mistress (played by the same actress who plays the mother), he backs off when she reaches for his genitals. Later, he makes an attempt to step in when she’s being hassled by a gang of dangerous looking youths but quickly subjugates himself to them and, when they do actually gang rape her, pretends to join in rather than stand up to them or have them think he is less than a man.

The fact that the object of his adolescent lust is both his father’s mistress and looks eerily like a younger version of his mother is another ancient problem where, as they say, every man kills his father and beds his mother. The father’s first reaction to his son’s predicament is to look for ways someone without a penis might experience orgasm - the answer he comes up with also speaks volumes and points to another of Kim’s ideas of circularity, that pain and pleasure aren’t so much linear poles but a circular continuum where both can exist equally at the same time as a sort of self-feeding vortex. The second idea he has is a penis transplant, and as the boy’s is no longer available he makes the ultimate decision to sacrifice his own source of pleasure in favour of his son’s. Unfortunately, it comes with some sort of homing device which means it only works with the mother (perhaps her ultimate revenge). The relationship between father and son changes again as they become rivals in an incestuous love triangle, only now it is the father who has become impotent and the son, literally, the man of the house.

If you think this all sounds a bit ridiculous (is a penis transplant even possible?) you aren’t wrong, and Kim Ki-duk knows it too. Odd as it might sound, Moebius is a comedy, albeit a macabre one. Sexual violence, incest, penis theft - not traditional comedic ingredients it has to be said, but Kim Ki-duk’s very definitely of the "it’s better to laugh than cry" school of thought and the sheer scale of Kim’s vision gives the entire project the sort of absurd grandiosity that makes it very difficult not to find humour in even the bleakest of situations. Kim isn't proposing any answers here so much as offering a series of (critical) observations of human nature - the world isn’t going to change just as it hasn’t changed since Euripides first started telling stories of people driven to the edge of madness. We’re all walking on a Moebius strip, repeating the cycle endlessly completely unaware that, at some point, we began walking on the other side. Like the best Greek tragedies, Moebius has a feeling of inevitability driven by the most primal of emotions. Once again Kim proves he’s not afraid to look deep into the dark heart of human nature and, though not for the faint-hearted, Moebius is one of his most accomplished films to date.

Moebius is released in selected cinemas and online via Curzon Home Cinema from 8th August 2014.

8
Shocking and provocative, Kim Ki-duk returns with another tale of familial dysfunction that cuts right to the core of human nature.
COMMENT AND DISCUSS
blog comments powered by Disqus