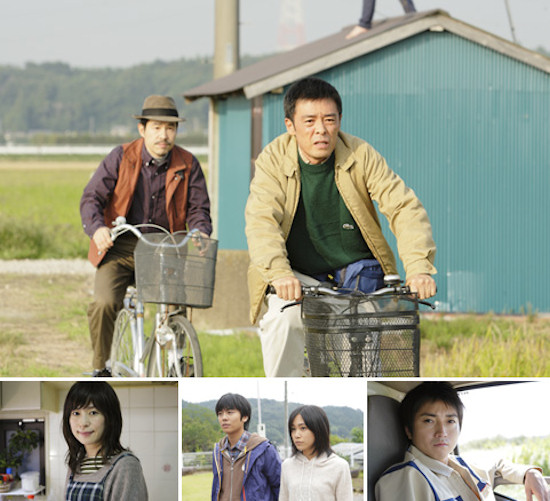 Man With Style, A - Azemichi no Dandi

In a slight departure from his other two most recent films, both of which feature plucky heroines learning to make it on their own, Yuya Ishii’s latest comedy is the story of a widowed single father trying desperately to live up to his ideal of being a ‘real man’ and reconnect with his children. Having been mercilessly bullied as a child, Junichi Miyata has lived under the maxim of being a ‘cool guy’, decent but a bit of a hard case and never showing any weakness or emotion, especially to his children. However, if he really wants to be a good guy he’ll have to learn that being cool isn’t all about being tough.

Junichi has been raising his son and daughter alone since his wife died of stomach cancer some years previously. Because of his ‘code’ however, he seems completely incapable of communicating with them. When he tries to talk to his children it usually comes out as a shouted tirade or a barked accusation. As you might imagine then, the children largely avoid or ignore their father. There is also an added pressure that, as the son failed to get a university place last year and is trying again, both children will be attending university for the first time in the same year. Junichi works as a delivery driver and although he keeps assuring both children that he has ‘loads of money’ so not to worry, it’s painfully obvious that he’s completely panicked about how he’s going to be able to afford all of this. Of course, he’s also worrying about how much he’s going to miss them when they’re gone, but he can’t very well tell them that. Probably as a result of all this stress, Junichi has begun experiencing intense stomach pains and is convinced he’s got the same symptoms as his late wife and is shortly to be joining her.

As he can’t tell his children about his fears, he goes to his oldest friend Sanada who was bullied alongside him when they were both children. Sanada had to give up work to care for his invalid father, who has recently died. He has no children of his own as he and his wife were unable to have them, and now his wife has also left, leaving him all alone. To cheer himself up a bit he’s bought himself a hat which he’s always wanted, much to Junichi’s amusement. Sanada is the total opposite of Junichi, calmer and kinder but also braver and less quick to panic. Junichi will have to learn from his friend what it really means to be a ‘cool guy’ if he’s to sort himself out and rebuild his relationship with his children before it’s time for them to fly the nest.

Where Sawako Decides and Mitsuko Delivers were, to some extent at least, about the problems of young women in society, A Man With Style concerns itself more with the dynamics of the modern family. Although it still has his quirky comedy traits, this is Ishii making a first foray into that most Japanese of genres - the family drama. Junichi is your stereotypical Japanese father - stern, authoritarian and unforgiving… except that he’s not really; he’s prone to tears and desperately wants to be able to communicate with his children but doesn’t know how. This situation is made all the more sad by the children’s dismissal of their own father. Even Junichi’s various attempts at trying to engage with them on their level fail, such as trying to connect with his son through his PSP obsession. He decides to buy a PSP for himself but of course ends up with completely the wrong thing and is relegated to playing old-fashioned games with Sanada.

Mind you, Sanada’s attempts at temporary fatherhood don’t always fare much better. Meeting up with Junichi’s nineteen year old son, he decides the most appropriate activity is to go to the children’s funfair - cue a man in his fifties and a teenager riding children’s rides in carriages shaped like animals, and even more hilariously Sanada is clearly having the time of his life! Still, crucially he listens to the children and gives them a bit of a talking to about what’s been on their father’s mind recently. Seeing as he’s no children of his own he comes to feel like a surrogate parent to the two and helps smooth things out between parent and child.

Of course, Junichi is also still grieving for his wife. As in Ishii’s other films, alcohol seems to play a prominent role and after having drunk a few too many, Junichi finally starts trying to talk to his daughter but ends up falling fast asleep on her bed. In his drunken slumber he has a surreal dream in which he sings the silly song that his wife used to sing to the children when they were small which he’s recently discovered on tape and has been repeatedly listening to. After the first verse, in his fantasy, his son joins in singing and dancing to the silly song. Eventually his daughter joins in too and the power of them all singing brings his wife back to life so she joins in as well, before even the deceased cat reappears! The family is happy, reunited and all singing the joyful song that reminds him of the time his children were little.

A Man With Style has a much more melancholic tone than some of Ishii’s other films. There’s a powerful sense of loss felt most obviously in the gaping void left by the mother’s absence. Sanada too has recently lost his father and with him his purpose as his carer, and Junichi fears both the loss of his children to their own futures and of his own status and authority as the patriarch. However, like Ozu, Ishii has been able to find the equanimity that comes with the knowledge of these life changes and we’re left with an acceptance of the sad yet inevitable changing nature of familial bonds. A sad yet very funny look at modern fatherhood, A Man with Style is a very welcome addition to Ishii’s work so far and we can only hope to see him continue to deal with such overarching themes in the future.

7
A humorous but bittersweet look at modern fatherhood, A Man with style will please fans of Ishii’s previous work and those new to his blend of quirky comedy dramas equally.
COMMENT AND DISCUSS
blog comments powered by Disqus