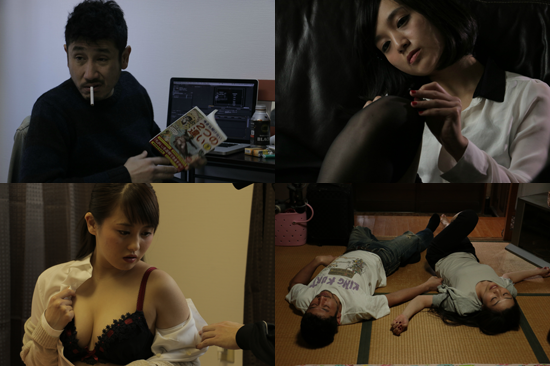 You ever heard the one about the blonde who was so dumb that she slept with the scriptwriter? The aspiring actresses of Lowlife Love are under no such delusions; they know how the game is played and that you need to catch the eye of the director if you want top billing. The movies are a business and hard-nosed decisions about who you put out for apply in every field - and that's something the deadbeat director Tetsuo has counted on to get his rocks off for years. Some time ago he was a sophisticated arthouse darling feted by the film festivals, but movies are a business and years of skittish producers unwilling to loosen the purse strings to indulge an auteur's vanity have meant that the buzz around Tetsuo the up-and-coming hot property has cooled off into congealed slop. Nowadays Tetsuo 'won't compromise his artistic integrity' and makes 'independent' movies that 'don't dilute their vision for multiplex commercialisation'.

Tetsuo augments whatever bottom-feeding cinematic swill he snuffles by exploiting poor starry-eyed ingénues bedazzled by his sole entry in the Criterion Collection with exorbitant fees for his perfunctory 'Acting School', but then something extraordinary happens. Some young and blessedly naive writer quite guilelessly hands him a script - a good script - and who should wander into his studio but an actress with... it can't be... I daren't jinx it... whisper it... genuine talent. The prospects are opening up for Tetsuo to make a film - a real film - once again, but can he see through the fog of his drunken stupor long enough to realise what opportunity has fallen into his lap, and can he hold his temper, arrogance and jealousy together long enough to see it through before the bigger fish of the film industry gobble up his minnows?

There's a lot of nudity in Lowlife Love - the very opening of the movie is a long single shot of a girl dressing - but it never seems particularly titillating, with scratched bums, unedifying dry-humping and Tetsuo belatedly realising that he's just been jerking off to YouPorn of his little sister making sure to beat down any mounting excitement. There's a  'University of Life' tough-love sense to proceedings - Tetsuo might be a repellent boor in how his wandering hands grope all over his new star Minami but it's a director's job to motivate his cast and you can't deny that being assaulted definitely brings her emotion out for the next scene workshop with a lot more conviction than the toneless Person A/B/C that make up the rest of his class. Tetsuo's producer Kida has some connections to bale him out a pickle with some local hoodlums, teaching you that life in the gutter will at least earn you the affection of the rats.

Lowlife Love's lazy attempt to create a love triangle between Tetsuo, Minami and writer Ken is nothing more than stilted filler that goes nowhere and sometimes Lowlife Love really does get a bit too obsessive with its cynicism and overeggs the pudding with how despicable the characters act - yeah, Tetsuo is a cynical self-centred jerk but he should be worldly enough to realise that pumping a church to fund his skin-flick would only end in disaster. Against all this why Ken and Mamoru stick around (even despite Mamoru's homosexual affection for Tetsuo) is doubtful and feels a bit contrived. Still, the movie doesn't sugar-coat how Tetsuo makes a rod for his own back - his violent lashing out of wounded pride as his acting students suggesting they might like to audition for television dramas (ugh!) destroys his only source of income. Tetsuo's muse Minami eventually becomes corrupted by the opportunities of bigger directors with better libidos, but in one emotional scene where her acting the domme to some oily creep shows her spits and curses gradually breaking down into horrified wailing you understand that fooling around in the green room is not just a game to play - there's a grim irony that becoming a lauded and adored star of the screen means the abject subjection of dignity.

Tetsuo quite carelessly steals his mother's pension and tries to get his girlfriend to give up the money put aside for hospital bills to pour more money down the drain his doomed projects, but when he angrily rejects his girlfriend in disgust when he discovers she's been engaged in enjo kosai ("compensated dating" or, ahem, 'escorting') to make more funds for the movie you get the sense that Tetsuo is an alcoholic who occasionally suffers moments of clarity. For as much Tetsuo "not selling out" is not a pledge to artistry but a lame, unconvincing and unpardonably cliché excuse for a total lack of achievement (even his dog-loyal gofer Mamoru gets fed up with it, telling him not to embarrass himself during a set-to with a more successful director) Tetsuo genuinely does believe in making his movie. A scene where he and Mamoru have a reconciliation and he reminisces about his dad taking him to the movies is very vivid. You can see that his indifferent father only dumped him at the cinema for cheap low-maintenance childcare but Tetsuo was beguiled by the ululating siren's call of a film-reel's whirr - before sex and before money he really did want to see his name up in lights for everyone to admire. That this reverie is inspired by the glare of headlights as our dynamic duo voyeuristically watch a couple making out in a car is a curious juxtaposition of the grime at the sketchier end of the industry but also that imagination can still wipe it down and clean it up.  The allure of a credit up above the audience is a gambler's drug addiction and it can make for meagre winnings (getting not the lead, not the support, but "second support" is a huge cause for celebration) but that glint and glister is still beguiling and at least it lasts for longer than a chip.

There are a good body of extras included in Lowlife Love which suitably enough for a movie about making movies include a good deal of what gets swept off the cutting-room floor. These are a welcome and not at all redundant addition with behind-the-scenes footage that reminds you that the Japanese film industry is quite removed in practice (and funding too) from Hollywood. The director of Lowlife Love is himself someone who slummed it making semi-pornographic 'pink' movies in Japan's zero-budget ghetto and you get the impression that a lot of what you see in Lowlife Love is drawn from life.

Lowlife Love can at the face of it seem to be a depressing and cynical film that has little good to say about the lies and swindles of the movie industry which in the camera lens and the editing suite is fiction to its very rotten core, but it manages to by and large maintain a delicate balancing act and it's not fair to call it hateful or misanthropic - a warts-and-all portrayal still implies that there is more besides the warts, after all. True enough, Lowlife Love does not have a Good End - Tetsuo doesn't get the girl, shoot his great comeback hit and get on the cover of Sight & Sound - but the life-goes-on Normal End does show him cutting the chain of his pride (or rather, his angst) that was tying him down to his fence-post; if he does not have his muse's love he has her respect and now Tetsuo does understand that High Art or Low Dross, it's all beside the point - there's no substitute for actually making something, and that's a worthwhile way to move on with a peppy spring in your step - which you'll need in order to roll with the punches life keeps flinging you - if that last scene if anything to go by, quite literally too!

7
A long way away from 'A Star Is Born', this is a guide to making movies graduated from the School Of Hard Knocks.
COMMENT AND DISCUSS
blog comments powered by Disqus