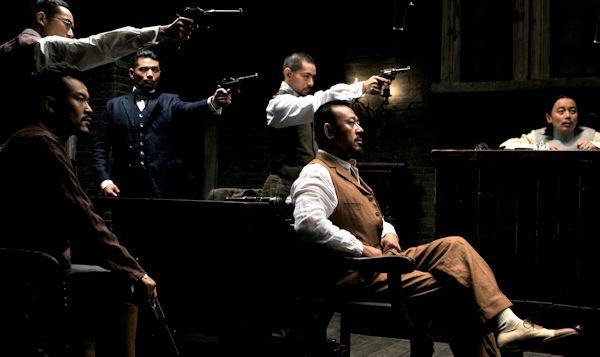 An unexpected hit in its native China, Jiang Wen’s Chinese comedy western Let the Bullets Fly eventually went on to become that country’s highest grossing film. Although the director has had his fair share of troubles with the censors (a previous film, Devils on the Doorstep, was outright banned) Let the Bullets Fly had no such problems, although ironically some have suggested that the audience’s political reactions to the film may have spurred on its rise to the top of the box office charts. Such nuances might be lost on us Westerners, but we can certainly still enjoy this humorous tale of bandits, conmen and eccentric warlords.

Let the Bullets Fly opens with a spectacular set piece that makes it abundantly clear that we’re about to watch a Chinese spaghetti western pastiche. A train pulled by white horses rockets out of a tunnel, the steam pouring out of the top of it has to do with the massive vat of hot pot bubbling away inside rather than any method of propulsion. Inside the train is a man who’s just bought the mayorship of a local town, his wife and a local councillor and in a second compartment protecting them a troop of armed soldiers. However, the armed guards are no match for the notorious ‘Pocky‘ Zhang (Jiang Wen) and his trusty bandits. They impressively make short work of derailing the train, killing all but the future mayor and his wife. However, cunningly Bangde Ma (Ge You) convinces Zhang that he’s just the councillor and encourages him to assume the ‘recently deceased‘ future mayor’s position in Goose Town, which as it happens is not far away. When they arrive, they discover the town has a very active ‘patron‘ by the name of Huang (Chow Yun Fat) who’s used to having his way about town and isn’t about to let any nasty little interlopers with egalitarian leanings interfere with the natural order of things. So begins a battle of wits between Zhang and Huang - who will triumph and what will that mean for the bewildered townspeople?

The film is set just after the fledgling Chinese Republic has collapsed into a chaotic competition of petty warlords in the 1920s. ‘Pocky‘ Zhang and his crew are a small band of bandits who’ve carefully cultivated a fearsome reputation that doesn’t quite match their slightly cuddly Robin Hood type intentions. Zhang is a master tactician, intent on confronting corruption and injustice everywhere. Even with Chow Yun Fat’s obvious prowess, the film is Zhang’s. Jiang Wen obviously kept the coolest character for himself and he excels as the all knowing Zhang; he’s just one of those fantastic characters that you can’t help but love right away because he’s just so goddamn… well… cool!

Jiang Wen has also managed to assemble a stellar cast around him. Chow Yun Fat, of course, is a worthy villainous foil for Jiang’s machinations, finally giving him the opportunity to do something more interesting than the awful misuse of his talents that Hollywood afforded him. Ge You as the deceptive Bangde Ma/Tang is the slimiest con-man this side of the Yangtze, duplicitous in the extreme but somehow almost loveable in his unreliability. Notable support comes from Carina Lau as Ma’s (whoever Ma/the mayor is at the moment, she’s not bothered) wife, who doesn’t get very much to do but does it very well as always.

This is a very funny film that relies heavily on very fast and very witty dialogue. The subtitles on the print at this screening certainly left a lot to be desired, ‘my butts hurt’ being a definite and recurrent highlight, but even if I couldn’t always completely understand the dialogue the comedy of the situation was perfectly played out by the actor’s performances. Some of the humour does get a bit dark in places and it’s typically quite a silly sort of humour in keeping with it’s nature as a pastiche, but nevertheless it’s very entertaining.

Whether or not you ascribe any political subtexts to the film, whatever they might be, Let the Bullets Fly is still massively enjoyable as an entertaining Eastern Western with comic flair. I’d definitely be up for a sequel chronicling the further adventures of Pocky Zhang, or even ‘Pocky Zhang and the Evil Space Monsters From Mars’ if it came to it. The film doesn’t really give us a hint of a follow-up but Zhang is such a cool character I’d be very sorry to have seen the last of him!

8
Perhaps the tiniest bit too long, but even with bad subtitling Let the Bullets Fly is a hilarious cowboy style romp that is guaranteed to entertain.
COMMENT AND DISCUSS
blog comments powered by Disqus