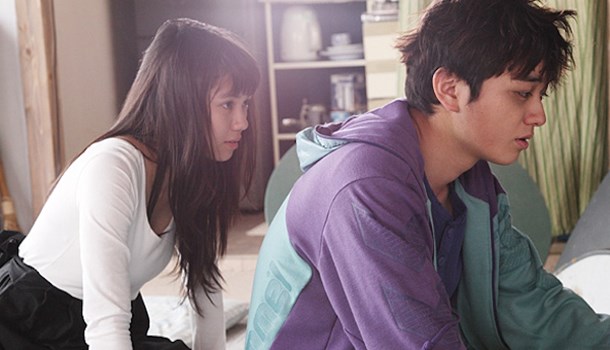 As I’ve become more familiar with works of Sion Sono, I feel I’ve been able to detect a set of patterns. I like to think to think of these as ‘The Three Moods of Sion Sono’. Broadly they seem to fall into: ‘Sono in Good Mood’ - generally whimsical and ultimately good natured, even if things get dark it will be ‘alright’ in the grand scheme of things by the end (see - Love Exposure, Exte, Hazard); ‘Sono in a Dark Place’ - extreme cinematic rage, general misanthrope and the feeling that nothing is alright at all and nothing ever will be (see - Suicide Club, Cold Fish); ‘Sono Feeling Sad (But Perhaps Hopeful)’, almost as whimsical/absurd as the first category but darker in tone, things end on a decidedly ambiguous note (see - Noriko’s Dinner Table, Guilty of Romance). Himizu finds itself in the third of these categories - set in the immediate aftermath of the March 2011 earthquake and tsunami perhaps its tone could never have been anything other than melancholy but the extremity of the situation only exacerbates the existential anguish which so colours the film.

Fourteen year old Sumida lives with his disinterested mother and abusive father who own a small pleasure boat rental company. It’s clear that neither parent is invested in raising their son, and in fact it’s Sumida who is more or less supporting himself through running the company. He seems to get more adult support from the homeless earthquake victims he lets camp around the boat house (and use the facilities when his mother isn’t home). His classmate, Keiko, gleefully admits to being his ‘stalker’, collecting various things he says and making large posters of them to adorn her room. Sumida is obviously embarrassed by the unwanted attention and does his best to ignore her, but Keiko isn’t the sort to be put off by something as simple as that.

What Sumida can’t know is that Keiko’s home life is just as difficult as his own. Despite the appearance of coming from a wealthy and respectable family, Keiko has to contend with a violent, pachinko playing mother who resents her daughter so much she’s building a set of gallows at home and expecting Keiko to make use of it as soon as it’s finished. Perhaps these two damaged children may have been able to find salvation in each other, but a momentary loss of control leading to a truly tragic event threatens to wipe out Sumida’s future altogether. Whether Sumida can build something ‘ordinary’ from the ashes of his ruined life remains to be seen, but perhaps he won’t have to do it while remaining as alone as he once believed himself to be.

One of the first images seen in the film is of a devastated landscape - ruined houses, crushed cars, abandoned domestic appliances standing incongruously alone amid rubble and debris; people seem to sleepwalk through it, dazed and confused. The only sound is that of the wind, terrifying in its intensity, intercut with broken radio waves and morse code transmissions - the digital storm making war with nature. This world of total desolation seems to have become a sort of shared consciousness, a dream state in which everyone is connected by a collective sense of trauma. This soundscape of utter futility often breaks through into the real world at times of danger or emotional distress, serving as a constant reminder of human powerlessness.

However, as much as the effects of the tsunami are integral to the film - everything has changed and mostly not for the better - it seems to me a mistake to over-emphasise its role in the drama. Whatever the problems Sumida and Keiko have, they are problems they have faced all their lives; the tsunami may have exacerbated the situation or forced them into reconsidering their circumstances but it did not create them. What it does do is throw into stark relief the choices they and the people around them are making about the sort of people they are and the sort of lives they want to lead. The stakes are so much higher now, the time for placid acceptance has passed.

Indeed, the way the two youngsters react to their respective situations is telling. Sumida is broody and almost entirely silent whereas Keiko has become unnaturally bubbly and positive to an almost irritating degree. It’s clear that at least some of Sumida’s animosity towards her is because he’s totally confused by and unable to cope with any sort of affection directed at him; he even behaves in a slightly passive aggressive way towards his refugee neighbours. As the poem Keiko so helpfully points out for him says, he knows ‘everything but [him]self’ and like so many youthful cinematic heroes the fracturing of his identity is tearing him apart. Like the ‘Himizu’ or mole of the title, Sumida is blindly flailing around, desperately trying to burrow through the darkness to make something of his life.

I’m aware I’ve made it sound a bit dour, but rest assured Sono’s dark humour is very much in evidence here and for all the human misery the end is surprisingly uplifting. What he seems to want us to take away is that despite the terrible things that might happen everyone has a right to dream, you don’t have to give in to the past - if you just keep at it you can get there. Don’t ever give up on the future, it’s already yours - all you have to do is find it.

Himizu is screening on the closing night of this year's Terracotta film festival on 15th April where actor DenDen will be attendance for a Q&A session.

If you're unable to make the festival, Himizu will also be screening at London's ICA and selected regional cinemas from 1st June, courtesy of Third Window Films. A DVD and Blu-Ray release is also planned for later in the year.