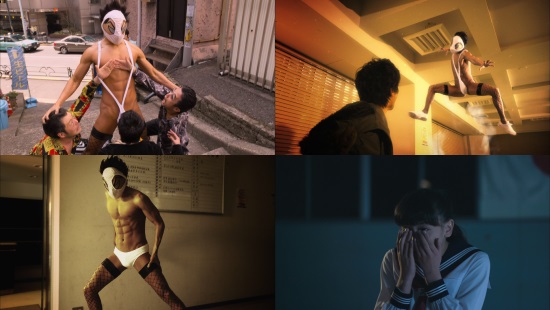 The first thing to note about HK: Forbidden Superhero is it's ridiculous premise. Thankfully the film does not take itself seriously at all and embraces it's bizarreness, with the cast giving a lot of hyperactive and very over-the-top performances. The biggest example of this would be Kyosuke's mum, who gives a scenery chewing performance every time she appears on-screen. Adding to the weirdness and overall disregard for seriousness are the villains that appear in the film - each one is based around a ludicrous premise that feels necessary when their opponent's superhero outfit consists of a pair of panties acting like a mask, a pair of fishnet stockings and a pair of briefs stretched out into a makeshift mankini.

When viewing the film it is best to go in with an open mind and embrace the absurdity of the whole thing - those expecting something more than a bit of dumb fun will feel sorely disappointed. However, for those expecting an incredibly silly film with an insane superhero and premise then there is a lot of fun to be had from watching HK: Forbidden Superhero.

Although a fun movie there are a few flaws with the film, the main issue being the special effects, which look incredibly low budget and just above straight to DVD quality. The film also features one scene with horrendous CG - while this would be a dampener on a more serious film, here it kind of works in its favour on account of being able to add to comedy and charm of the movie. The film follows a very predictable and rather cliché approach to superhero movies where it throws villains of escalating power at the hero. Most of these villains only last for one scene to set up a joke and punchline regarding their powers before swiftly and comically being defeated, which in itself leads into another big problem HK: Forbidden Superhero has - its comedy is very one note and feels like the same joke with minor variations is being repeated for its entire runtime. This can make the film a very big turn-off for people who do not like the brand of humour that HK:Forbidden Superhero has to offer.

All that aside, HK: Forbidden Superhero is a rather unique and odd film - a movie that is sufficiently weird in its approach to superheroes and humour that will be able to provide plenty of laughs for those who go into it with the right frame of mind. However, once the experience is over it doesn't feel like there's any more incentive to rewatch the film - most of the laughs feel like they are derived from seeing the spectacle of the film for the first time, and once they have been seen they cannot be experienced in the same way, although for those who haven't seen it yet or for those who can get a group of friends together to watch it for the first time together then you're in for a fun and bizarre experience.

7
A bizarre and silly comedy with an unconventional superhero.
COMMENT AND DISCUSS
blog comments powered by Disqus