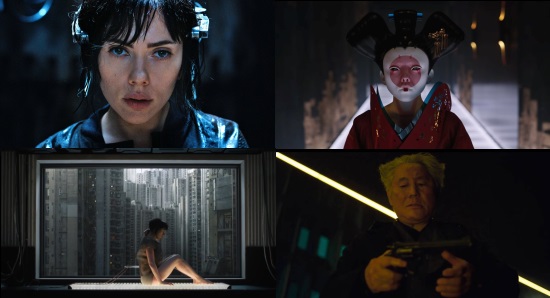 American live-action adaptations for anime haven’t exactly had a brilliant track record, ranging from the abysmal (Dragonball Evolution) to the just about average (Blood the Last Vampire), so when the live-action version of Ghost in the Shell finally broke free of development hell fans were...cautious to say the least, myself amongst them. But the signs kept looking up. Scarlett Johansson signed on as the Major, with Japanese legend ‘Beat’ Takeshi Kitano as Aramaki. Early trailers showed an intriguing world which certainly looked the part, and whilst the director of Snow White and the Huntsman wouldn’t have ever been anyone’s choice for this material, he certainly looked to be doing a good job with praise even coming from Mamoru Oishii following a set visit. Heck, even the advertising train seems to have gotten behind the film with trailers and posters everywhere (and even led to a happy time of being able to find the original anime on supermarket shelves). There were negatives too of course, with the film receiving a huge pummelling for alleged ‘whitewashing’ of the cast being the main issue, but now the films here and amidst all this we can finally find out – is it good?

In the future the lines between man and machine have become more and more blurred with the advancement of cybernetics, which have now been pushed to their limit with the creation of Major Mira Killan. An accident survivor chosen to have her brain placed into a fully cybernetic body, she is placed within Section 9, the anti-terrorism force under the government to use her new body and abilities for good. Along with her partner Batou and the rest of Section 9 she begins to investigate a new case, following the hacking of the brains of several key people within the upper echelons of the company that created her, and is led to a hunt for cyber-terrorist Kuze who has incredible control over networked systems... not to mention the fact that he seems to know a lot more about the Major than he’s letting on.

To get this out of the way right now before we get into the nitty-gritty – you say it ‘The Major’ when you are referring to yourself or talking about someone in the third person. Yes I know it’s a dumb American grammatical error but it’s like nails on a chalkboard every time this film does it. Major is her rank not her name. Okay, so anyway, on to the more pressing this to get out of the way – is Ghost in the Shell good? Answer: YES. Is it a great adaptation? Well... not so much.

Visually the film is stunning. By now we’ve all seen the insane, Blade Runner topping city that the film takes place in, with its incredible displays of holographic billboards and the brilliant, Weta Workshop created physical props like the animatronic Geisha heads. The full film is packed with brilliant touches, and director Rupert Sanders proves that if nothing else he can make this thing look the part and put its apparently considerable budget to great use. On top of this, the multi-national cast are a really interesting group, with Pilou Asbaek proving to be a surprisingly faithful Batou once he finally gets his eye lenses. Takeshi is also as compelling, even though the decision to have all his dialogue in subtitled Japanese (he doesn’t speak English) would have felt a lot more natural if a couple of other members of the cast had used the same trick with their own native language. As for Scarlett Johansson, well she puts in a really solid performance here and it’s just a shame that the script doesn’t give her much to run with.

Before I get into the script which is where the issues start to crop up, I should point out that these are mostly only going to be issues for people who are more well-versed in their Ghost in the Shell knowledge. People going in without too much background knowledge will likely have no problems with any of this stuff.

So, here’s the thing. The concept of the script is just wrong for Ghost in the Shell. Sure, all the big set pieces from the original film are there (and a few from a couple of the other adaptations too), they look great and everything proceeds as you would expect... except that you quickly realise that what they’ve done is tack these action sequences onto a remake of Robocop. That’s not a joke either, the film's main conceit is that there’s a big secret about the Major's past before she got her new body and that the company who created her might be lying to her face about it (not much of a spoiler since they give that away in the trailer). Ghost in the Shell has never really been about this in any of its incarnations, which have all been focused on the much more interesting idea of a smart, powerful woman dealing with some pretty cerebral concepts and generally having to outsmart her opponents to deal with them. The result is something that ends up feeling much more generic than it should and strips the Major of much of her strength as a character and removes all of her whimsy. That this makes her the first and only one of her kind in the film also makes the impressive world building suddenly feel a lot smaller too, which is a shame. Additionally it means that Kuze (not the character from 2nd Gig and actually a renamed version of another Ghost in the Shell antagonist) is also something of a toothless villain for all the bad he does during the film's first half.

There are also a few weird choices made throughout which feel a bit off, such as having shown off the impressive recreation of the cyborg building scene from the original film set to the original soundtrack as part of the marketing for the film, only to have completely different (and nowhere near as evocative) music in the actual film (though the classic piece of music does play over the end credits).

Ultimately then, your mileage with Ghost in the Shell is going to vary, but what we’ve ended up with is a competent sci-fi film which whilst nowhere near as good as the original, is certainly better than, say, Arise and is definitely better than the last few attempts at thought-provoking sci-fi Hollywood has produced. My advice – get out there and see it, have a good time, and then start campaigning for the Japanese dub (which features the cast of the original film reprising their roles) to be included on the western Blu-ray release.

7
A solid effort (but I miss the Tachikoma!)
COMMENT AND DISCUSS
blog comments powered by Disqus