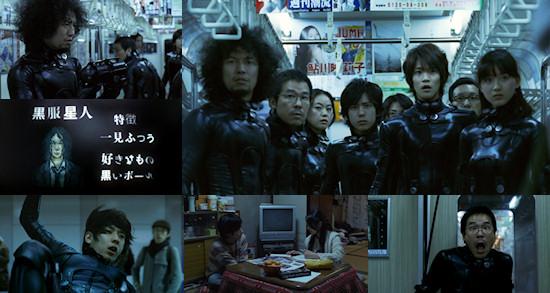 A few months ago, when I took on the task of reviewing the first of these two Gantz live-action movies, I did so with a feeling of trepidation brought on by the extreme reactions its anime incarnation had provoked. I needn’t have worried, as I found the first Gantz film to be a vastly enjoyable action blockbuster that had surprisingly high production values and quality performances. I did, however, worry that fans of Gantz’s anime or manga forms may have been disappointed with the changes from the source material. Although differences in plot and character were slight, the extreme elements that had made Gantz so infamous had been toned down or removed. If fans of Gantz had been upset by this or felt let down that the content had been diluted for a mainstream audience they might be better to steer clear of part two altogether - as far as I can ascertain having only read about the manga rather than the manga itself, Gantz: The Perfect Answer diverges entirely from its manga base to create an completely different story arc.

Gantz: Perfect Answer starts five months the first film ended, with Kei Kurono still committed to gaining enough points to redeem the lives of everyone that has been killed in the service of Gantz. In between missions he’s pursuing a tentative relationship with a girl from college and trying to take care of those left behind after Gantz has taken someone from them. Things are about to heat up though, as something has changed with Gantz. The team’s numbers appear to be swelling and the aliens are getting tougher; innocent civilians are now in danger with only the Gantz team to protect them. Added into the mix is a police officer sniffing around the post-mission destruction in various areas of the city who seems to be stumbling onto Gantz’ trail, and a model with her own mini Gantz which seems to have an entirely individual agenda. Whether this is all part of Gantz’s ‘Perfect Answer’ or Gantz in its last desperate extreme is something Kei and company will have to figure out for themselves.

Where the narrative of the first film had followed the plot of the manga fairly closely, this is a total departure which is sure to upset some fans even if they’d previously enjoyed the first instalment. It is also very much a ‘part 2’ rather than a sequel, although I really wouldn’t recommend anyone try to watch Perfect Answer without having seen Gantz first. There is a brief recap of the preceding events at the beginning of the film, but it’s much more of a memory jogger than a synopsis and it would most likely be a very confusing experience for anyone attempting to jump right in at the beginning of the second film. Without wishing to spoil anything I will also say that the ending is going to prove very divisive. If the final events are to be believed, Gantz has certainly been misleading us about the extent of its capabilities. Perhaps everything ends up a little too ‘perfect’, to the extent that it begins to feel contrived and at odds with what’s gone before.

After what seems like a slow start, the pace continues to accelerate steadily until the final climactic battle scene. If you were impressed by the action sequences in the first film, the second will exceed even your highest expectations. The earliest of these impressive momements takes place almost entirely onboard a subway train packed with innocent passengers and some very angry shape shifting aliens. As you might imagine, the extremely cramped environment of a narrow train carriage might not be the ideal place to be facing off against a seemingly unstoppable enemy - especially when your primary weapon is a katana. This calls for extremely impressive choreography and direction, both of which this production has in spades. The CGI is just as impressive as in the first Gantz film and thankfully is never over-used. Both parts are extremely well directed and, despite differences in tone and pacing, form a coherent whole which certainly gets the most out of its production budget. Although Manga Entertainment’s DVD transfer is excellent, it is a shame they are unable to bring us a Blu-Ray release for Perfect Answer as they did for Gantz, which would only have showcased its fantastic aesthetics even more.

Similarly, the majority of performances maintain the same high standard from the first film into the second. Kazunari Ninomiya is surprisingly good as a young man who’s discovering he could be a much better person than he ever thought he could be. The ever present Kenichi Matsuyama has a bit more to do in this film and as usual does it very well. Notable support comes from Tomorowo Taguchi in a relatively small role which he nevertheless manages to fill with characteristic verve. Takayuki Yamada also turns in a strong performance even if the subplot of his dogged police officer’s quest for the truth behind Gantz seems almost like an irrelevance by the time the credits roll. Despite its high action content, Gantz: Perfect Answer still manages to pack in a decent amount of character development. Even the secondary characters matter and you come to care about all of them no matter the amount of screen time they actually possess.

Gantz: Perfect Answer ups the ante significantly in terms of action whilst matching the same high production values as the first film. There’s no point pretending this is high-brow entertainment; you won’t find any deep message or examinations of the human condition here but what you will find is a tremendous science fiction thrill ride. I wouldn’t say it’s completely mindless, but perhaps what it lacks in brains it makes up for in heart (and a not insignificant amount of style). As far as science fiction blockbusters go, Gantz as a whole has to be one of the better efforts of recent times. Hugely enjoyable.

8
Don’t expect anything too cerebral, but Gantz: Perfect Answer is just as much fun as its predecessor. An extremely well put-together action blockbuster with bags of style that is guaranteed to entertain.
COMMENT AND DISCUSS
blog comments powered by Disqus