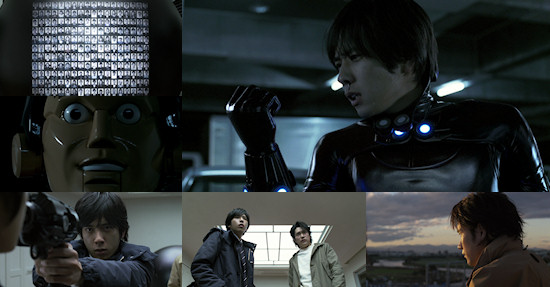 Like most people I imagine, Gantz first came to my attention through the extremely polarised reactions its anime adaptation was getting. I hadn’t seen the anime or read the manga myself, but when news broke about this live-action film outing I decided to watch the anime to see what all the fuss was about.

I had heard about the explicit content and the extreme violence, so I was preparing myself for quite a difficult watch - however the furore had perhaps unduly worried me and as it turns out I found Gantz to be nowhere near as disturbing as I’d feared. From the comments that I’d seen, I expected the nature of the violence to be disturbing rather than there just being a lot of it. I also had the same concern about the sexual content but again there were only two scenes, which while explicit were neither disturbing nor titillating. More bothersome was the attitude of the protagonist who is a lecherous, self-centred, vain, arrogant, possible sociopath. It really says something when you start to like a character a bit more because he’s not, in fact, a rapist. I found the anime vulgar in the extreme but I admired, in some ways, what it seemed to me that it was trying to do. Buried under all the grindhouse style extremities there did seem to be a deeper dialogue going on.

Anyway, those who disliked the elements that made Gantz so infamous can check out the film without fear, as almost all of its ‘adult content’ is gone. The film is a large budget, mainstream Japanese cinema release starring the ever-popular Kenichi Matsuyama and the lead singer of an idol group. It’s not surprising therefore that the formula has been tweaked to make it accessible to a mainstream audience. There is one brief incidence of tasteful female nudity but no sexual content at all. Kurono (Kazunari Ninomiya) is still unpleasantly sex obsessed, as we can tell from his lingering look at a racy advert board and his staring at Kishimoto (Natsuna), but because we don’t have access to his interior monologue he doesn’t quite seem as much of a… how shall I put it? Well, he’s no prize, but it’s a big step away from where he started in the anime and manga.

In fact, the back stories of all three of the major character from this arc have been changed quite a bit. The protagonists are a bit older - not hugely so, as they’re hovering around twenty or so, but there’s no high school. Kato (Kenichi Matsuyama) is already working after falling into trouble with the law and trying to care for (or maybe being cared for by) his younger brother. Kishimoto was living with a man, not an overbearing mother. The opening scene which results in Kato and Kurono being sent to Gantz is also quite different, as is Kurono’s motivation, but it echoes back to a new scene near the end. All these changes will probably frustrate fans of the existing franchise but for those new to the film it obviously isn’t a problem.

The gore is still present however, at least in the first mission. For those who’ve made it this far and have no idea what any of this is about – Gantz is a mysterious black orb that grabs people at the moment of death and imports them into its alien eradication game. Each of the people who materialize in Gantz’s curiously stark Tokyo apartment must put on a special suit and kill whichever alien Gantz flashes up on its screen within the time limit. If they survive they are awarded points and sarcastic epithets from Gantz, and if they attain a hundred points they get access to a special menu. During their downtime from alien hunting they get to go back to their normal lives. Obviously, because the film is so compressed we race through missions quite quickly and there isn’t a lot of downtime for us to get to know the main characters in. Also, it’s the nature of Gantz that some people die right away, or just as we were just getting to know them. As such there is a slight problem in the film in that it’s difficult to engage with the characters because we don’t get the time with them as people; time when they aren’t busy with a moral quandary over killing aliens.

However, the mission/action scenes themselves are excellent. Yes, some of the aliens are a bit ridiculous in true Japanese/Doctor Who style (a plastic looking robot with an eighties style boom box for example) but they are obviously meant to be a bit funny and the humour really adds to the entertainment value of the situation. The CGI is also really well done throughout; it’s just very impressive.

I feel a bit strange trying to review this as it’s technically part one of a two part film, and if you wait right the way through the credits you’ll be treated to a mysterious epilogue and a trailer for the next instalment. It’s true that maybe not a lot actually happens other than fighting aliens, and some will complain about the lack of character development, but we can’t really critique this without seeing part two. From the trailer at the end of this film the second part looks as if it will deviate quite a bit from the anime (if you have seen the anime or read the manga, this film finishes shortly after the big Buddha battle). I’ve no idea how long we’ll have to wait for it but Gantz: The Perfect Answer looked to be even more impressive than the current outing.

That said, don’t be afraid to watch this part on its own as everything is wrapped together quite nicely - it doesn’t leave you hanging like a lot of other two-part movies I could mention. There’s a definite “end of act one” feeling, so you do at least feel satisfied that something has concluded, but coupled with a curiosity about what happens next that leaves you eager for act two.

Gantz is quite a fun mainstream light sci-fi thriller. Fans of the franchise might be upset with its obvious toning down and the changes to the storyline but this is regardless a very well made film. Don’t expect anything too cerebral, but if you’re in the mood for a summer blockbuster type sci-fi movie you could do worse than consider Gantz.

7
Gantz fans might not appreciate the adaptation, but this is an entertaining mainstream sci-fi movie that’s much better than most people would expect. Roll on part two.
COMMENT AND DISCUSS
blog comments powered by Disqus