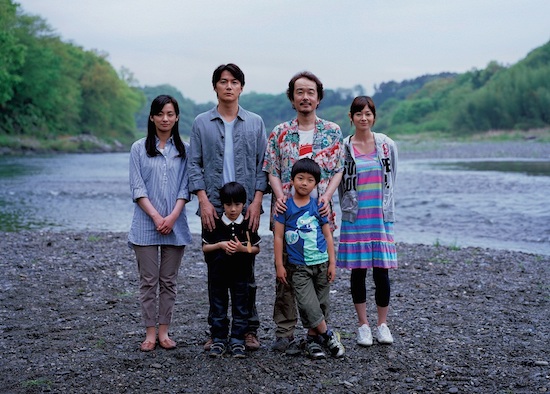 It’s a fine time for fans of Japanese cinema right now, with Arrow’s impressive new Seijun Suzuki box-set hitting shelves only a week ago. With the golden era of the 50s and 60s covered on that front, the distributor is also taking us bang up to date with their Family Values set - bringing together three films from director Hirokazu Kore-eda, arguably the most critically acclaimed Japanese film-maker of the moment. Frequently compared to the legendary Yasujiro Ozu, Kore-eda’s films paint out the lives of ‘ordinary’ Japanese in exquisite, tenderly observed detail - tugging the heartstrings with moments that feel all the more real because they show us the mundane truth of life, both good and bad.

I Wish (2011) is a beautiful, elegiac epitomisation of this work ethic - presenting us with a child’s eye view into a world that feels achingly beautiful in its encapsulation of pure, distilled nostalgia. The film tells the story of two young brothers who are force to live separately when their parents split up, but are drawn toward an inexorable reunion when they plan to meet where two bullet trains are scheduled to pass each-other by (an event so fantastic, it brings with it magical miracle-granting properties - or so the brothers tell each-other…).

Remember the excitement of visiting the local swimming pool every week as a kid? Or maybe getting a brand new book out of the school library? How about taking a train ride cross-country for the first time? I Wish is all these things and more, allowing us to marinate in a slow-paced soup of lost innocence. Your mileage may vary considerably - by sticking so closely to the viewpoint of young children, the film feels very much like its own creature - alienated from the cinematic ‘rules’ we ascribe to more adult protagonists. But in doing so, it moves towards a heartbreaking conclusion that will have you reaching for tissues before the credits have even started rolling. There’s an obvious comparison with Ozu’s own schoolboy drama Good Morning (1959) here, but the beauty of I Wish is that it remains utterly rooted in its contemporary aesthetic - a window onto a depiction of modern life that is almost documentary-like in its slavish attention to a hyper-real aesthetic.

Keen to show he’s no one-trick pony however, Like Father, Like Son (2013) sees Kore-eda operating in a far more populist, narrative driven mode - something reflected in the film’s cinematic treatment, which trades in I Wish’s bleached, naturalistic tones for a glossy, saturated modernity. With this new look comes another departure - gone are Kore-eda’s usual working class heroes, with our viewpoint this time coming via a firmly upper-middle class family who are thrown into turmoil when both they and another couple are told that their six-year-old sons are not biologically their own; having been swapped at birth with each-other.

This kind of high-concept plot ‘gimmick’ sees Kore-eda returning to the kind of hook-laden opening gambit he pulled with After Life (1998), and while it’s easy to smirk at the rather far-fetched feel of the premise, the resulting untangling of said gambit is so well told, so excellently acted, that you’re quickly caught up in a web of strained allegiances, no-win situations and a lingering sense of ‘what would I have done…’. The film wears it’s glossier guise well (it also took substantially more at the box office than the other two contained on this set) - and while it lacks some of the lyrical visual beauty of I Wish, it more than makes up for it with its tightly paced, grippingly compassionate storytelling.

After The Storm (2016) is receiving a stand-alone release from Arrow on the same day as this compendium set, and as such, we’ve given it a closer look elsewhere on the site. But it’s worth noting that in many ways - the movie acts as a kind of ‘best of both worlds’ approach, harking back to the naturalistic indie-flick aesthetic of I Wish, but pairing it with the clearer, more populist narrative drive of Like Father, Like Son. It’s a neat move on the part of Kore-eda, and marks the movie out as the work of a director who is evidently accomplished at building incrementally on his previous efforts, taking tidbits from here and there to piece together something that really feels like not only a natural evolution, but also a kind of ‘Greatest Hits’ guaranteed to push all the right buttons when it comes to audience expectations. In that respect, it’s a shame that Our Little Sister (2015) - released by Curzon Artificial Eye - couldn’t have been included in this set too, ensuring a clean sweep of Kore-eda’s output from this era. It too saw Kore-eda taking a more populist angle, but also crucially focused in on the more female orientated viewpoints that were clearly bubbling just below the surface in Like Father, Like Son.

All in all though, even without the inclusion of Our Little Sister, this set represents an absolutely fantastic chance to grab three of the finest works of contemporary Japanese film-making. Individually, the films are stellar, but taken together and digested as part of a clear thematic triptych - as this set is so clearly designed to present them as - they become, if anything, even stronger. As we argued in our review for After The Storm, Kore-eda is more than just an Ozu imitator, and this set is a forthright exercise in demonstrating the real versatility to his cinematic eye. From prime indie-movie aesthetic to gripping high-concept drama, the running theme of familial ties brings these works together with a powerful resonance, and if you’ve ever been looking for something that’ll skyrocket your nostalgia tastebuds into overload with hazy, half-forgotten fragments of childhood memories, then this set will be the wisest investment you ever make.

Extras include newly filmed introductions to all three films by Tony Rayns, brand new career-spanning interviews with the director, a visual essay on Kore-eda’s films and style, a documentary on I Wish, cast interviews, a feature-length making-of documentary on After The Storm, promotional featurettes, original trailers and a 60-page collector’s book featuring new writing on all three films.

10
Three powerfully distinct looks at the theme of familial bonds, with an emotional resonance to warm even the hardest of hearts.
COMMENT AND DISCUSS
blog comments powered by Disqus