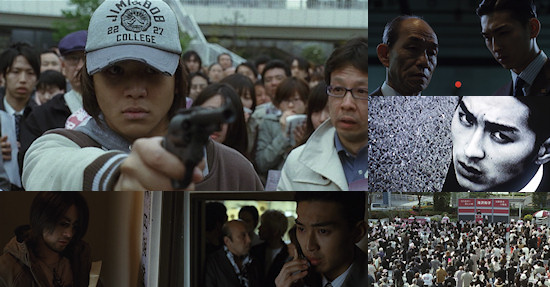 In another Japan which is peaceful and prosperous, a totalitarian government has come up with an ingenious scheme to maintain the country’s standing. Alongside the vaccinations each child must be given before starting school, one in one thousand will be given a tiny explosive which will kill them at a set date and time somewhere between the ages of eighteen and twenty-four. It is hoped that this proximity to death will spur on the young people to really make something of themselves to the greater benefit of their entire community.

Now, this does seem a very odd idea. Perhaps in Japan where people are more community minded it doesn’t seem such an strange concept, but it seems to me that if there was an enhanced likelihood of dying between eighteen and twenty-four a lot of people would just go about enjoying themselves and not doing anything very useful at all. At least in the West the idea of living each day as if it were your last paints a picture of selfish, unbridled hedonism. Of course, there is a very real chance every day that it might be your last, that’s the condition of living, but these people are told that some of them will die. Nevertheless, I’m not entirely convinced it would make that much difference given that it’s just another general condition of life that everyone is subject to.

Then again, totalitarian governments are not really known for their rational thinking. It does seem the kind of thing that a desperate regime might come up with as a means of control. It doesn’t make any sense, but The State must be obeyed, especially when The State makes no sense. If you can accept the absurdity of the central idea as a part of this alternate world then Death Notice: Ikigami is a film with quite a lot to say.

Kengo Fujimoto (Shoto Matsuda) is a government employee whose job it is to process and deliver the “ikigami” (or death notices) to the unfortunate recipients twenty-four hours before the appointed time. He is twenty-five years old so has obviously survived the danger zone. Although he seems uncomfortable with his work, he nevertheless continues to carry it out as instructed, even going so far as to interrupt a suicide in order to serve the notice of impending death. He’s even come prepared with a pack of ‘sorry we missed you/while you were out’ style cards incase there’s no one home. His disillusionment grows as he witnesses the effect the notices, and the deaths, have on the victims and people around them until he finally feels that he must interfere.

Death Notice: Ikigami is a dark but emotionally engaging film that manages to balance both the human and the political aspects of its subject matter. With its overtones of George Orwell’s 1984 (or maybe Brazil without the surrealism would be a better comparison), the film raises of the question of how far you should take your allegiance to the state and what can be done when you believe the law is wrong. However, it also shows that in some of these cases the person concerned only fulfilled their potential or managed to get their life in order in that last twenty-four hours when they knew that was all the time they’d ever have, because it was what they needed to do - one last grand gesture that expresses the energy of all that stolen time.

Is the state therefore justified in asking for these sacrifices? The film would say not. Even if the victims find a personal epiphany in their last hours, none of them really do anything, or have done anything, which could be said to benefit national prosperity. Luckily, it seems Fujimoto isn’t the only one to have reached his limit with this ridiculous system and change, though slowly (and sadly not in this picture), eventually will come.

The film leans much more to the naturalistic side of Japanese cinema rather than the over the top stylisation that can be seen in a lot of mainstream films. All of the actors/actresses turn in very credible and moving performances that prevent the melodramatic elements from taking over.  Takimoto has created a well-crafted film that has largely avoided the pitfalls that often plague this type of narrative.

8
A well-crafted and thought-provoking Orwellian discourse, that manages to stay on the right side of sentimentality.
COMMENT AND DISCUSS
blog comments powered by Disqus