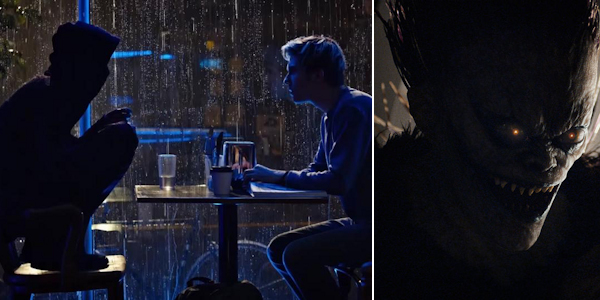 Netflix continue to surprise with left-field productions of their own, and I was especially surprised when I caught Death Note in my feed. The film was dropped by Warner Brothers, but due to Adam Wingard's passionate belief in his project he was allowed to move production to the streaming giant.

With Death Note already the recipient of two Japanese film adaptations (and a prequel) which were decent, if not outstanding, what could yet another US remake of an Asian hit bring to the table?

The film certainly starts with a bang. Barely 5 minutes in and Light has the Death Note in hand and a meeting with Ryuk, while stuck in detention. He certainly handles the encounter with less grace than the original protagonist, losing his wits and banging at the door trying to escape. Be in no doubt, Netflix's Light Turner is no Light Yagami.

Further muddying the waters is the portrayal of Ryuk. The character certainly looks and sounds the part, with nice sharp features and a cackling Willem Defoe voiceover straight out of Sony's original Spider-Man (and is it wrong to note that Ryuk already looked a bit like the actor before he was cast anyway? Creepy!)

No, the issue with Ryuk is that he's changed in one very crucial aspect - far from being an indifferent observer, Ryuk essentially instigates Light's first kill, urging him to write the name of a school bully into the book to see what happens. Whilst this may seem a small detail, it massively undermines Light's credibility. Light Yagami's first kill was a dangerous criminal who he dispatched before he was even aware of Ryuk's presence. When Light Turner later lectures his girlfriend on not using posts on the internet as justification for killing people, it rings pretty hollow when he fired a ladder through a minor thug's braincase as a warm up. Light Yagami would never stoop so low and that, in essence, was his power. His uncompromising vision of justice was key to his character, and here it seems watered down.

This is compounded by the fact that, unlike the original, Light Turner is a victim of violent crime, having lost his mother to a murderer who got away without charge.

Anyway, that aside, the story that is told here works well enough for both the time allowed and the resources deployed. The gore is a bit much at times, it's really not what Death Note is about, but you get the feeling they added the Final Destination executions for the spectacle and a bit of buzz.

L, played like a hyperactive Benedict Cumberbatch Sherlock by Lakeith Stanfield, is actually pretty good in the role. He has solid presence and he commands the space he's in with good camerawork to back up his confident strides mixed with quick, nervous movements. It is a solid portrayal and for me he was the highlight.

Margeret Qualley plays Mia Sutton, a socially displaced teen, who happens to be pretty hot (only in Hollywood...) but she gives off a suitably creepy Morticia vibe and is soon as obsessed with the Death Note as she is with Light himself, if not more so. This turns into a major point of contention later in the film, but her character is used more as a plot device than fully rounded antagonist - a bit of time spent looking into her clearly damaged psyche would have paid dividends. We never see her family or life beyond Light, and so she has less depth than she required.

The film's ending is realised very differently to the original source material, but does contain a few interesting twists.

At it's core, the film lacks the depth and character of the original, due perhaps to misunderstanding certain critical factors in the make-up of Light and Ryuk's relationship and motivations, but while a lesser product of a superior tale, it's an entertaining enough distraction and worth a watch if only for the magnificent malcontent of Defoe finally realised in his true form at last!

7
Distinctly the lesser of a superior evil, but certainly no disaster. Enjoyable but ultimately throwaway entertainment.
COMMENT AND DISCUSS
blog comments powered by Disqus