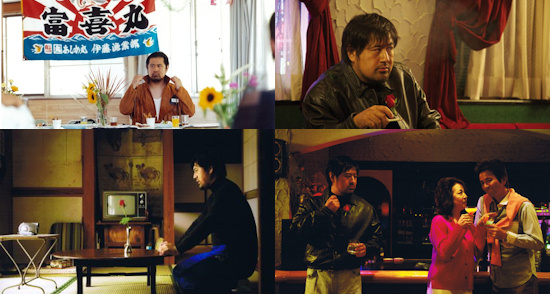 Manzo is a lonely fisherman - approaching middle age he’s growing tired of coming home every evening to an empty house to microwave a frozen corn dog before going to bed and starting the whole process over again. We can see how hard his work is by the blisters that cover his hands, and spending all day alone on the boat can’t very much fun either. Trying his luck in a local pub, a single rose tucked into his button hole, he sets his sights on a woman at the bar only to have her stolen out from under him thanks to a tiny moment of hesitation. A liaison of a different kind presents itself to him on his way home, but poor innocent Manzo totally misinterprets the woman’s gesturing and ends up trying to do a good deed by buying her a drink from a vending machine before heading off home. Poor old Manzo, he just can’t seem to get it together.

Luckily for him then, a big city company has decided to run a singles event for fishermen to meet city women. Being told he’ll need a smarter outfit Manzo goes to the local second hand shop, but unfortunately gets talked into some rather unwise attire by a very excitable shop keeper who obviously saw him coming. If that wasn’t enough to frustrate his chances at the party, he’s also had to send in a personal introduction video. This would have been fine as Manzo is at heart a romantic - he apologises for having so little to offer other than the fisherman’s life he inherited from his father and his calloused hands but, he says, if he were to find a wife he would take those rough hands and tenderly embrace her. However, Manzo really should have watched that video back before giving it in because if you look just behind Manzo you can see a young woman and a boy peeking out of a cupboard, which rather ruins the effect.

This does at least begin to explain why the number of corn dogs seems to be magically depleting in the freezer. Who are they though, where did they come from and how did they end up in Manzo’s house? After an initial reaction similar that of most sane people (i.e ‘get out of my house’) Manzo reflects on the emptiness of his life and wonders if he wasn’t being given the opportunity of finding the sort of solution he’s been seeking. Tracking the cupboard dwellers down he brings them back home and invites them to stay. Will Manzo’s romantic gamble finally pay off? Maybe things are finally looking up.

Director Naito Takatsugu has crafted a sweet, stylish romantic comedy/drama which manages to perfectly mix the ordinary and the absurd. There’s a fantastic sequence in which Manzo and his new family engage in classic family activities like picnicking and synchronised bobbing in corn fields. However, the film doesn’t shy away from examining the more ambiguous elements of the situation. There is definitely some kind of transaction in play here, would Mitsuko be staying with Manzo if she had anywhere else to go? Manzo seems to think not, he becomes jealous to the point of paranoia anytime he sees her interacting with another man. It does seem worryingly as if he feels he’s bought her through allowing her to stay in his home and installed her in the position of ‘wife’ secure in the knowledge that she can’t escape from him on her own.

Mitsuko though may be tiring of the life of a fisherman’s wife and Manzo’s romantic yet constraining treatment of her. Perhaps she isn’t all she seems either - after all Manzo barely knows her at all aside from the brief explanation of how she and the boy came to be taking refuge in his cupboard. Is it her, or the idea of her that Manzo desperately wants to cling on to? Maybe this sort of arrangement suits neither party well enough for it to last but if Manzo truly wants to end his lonely days he’ll have to think about what it is he really wants. He might have just found it, albeit not quite in the form he expected.

The Dark Harbour is a sleek, stylish and usual film that absolutely flies by. Its idiosyncratic style and innovative technique mark director Naito Takatsugu as a voice to look out for in the future. Despite his flaws, the audience can’t help falling in love with Manzo, whose old fashioned romanticism is sure to charm the heart of the most dedicated cynic. Shinya Kote plays this to perfection - his bulky frame and hangdog expression are exquisitely suited to the part. Bittersweet at times, this is an extremely well-constructed character drama that also has bags of humour. In short, it’s very enjoyable indeed.

The Dark Harbour was screened as part of the Japan Foundation Touring Film Programme, which takes place in London, Sheffield, Edinburgh, Glasgow, Belfast, Bristol and Nottingham.  You can find more details about these events on the official web site.

8
A stylish and unusual romantic comedy/drama that is absolutely charming yet doesn’t shy away from the darker side of its subject matter.
COMMENT AND DISCUSS
blog comments powered by Disqus