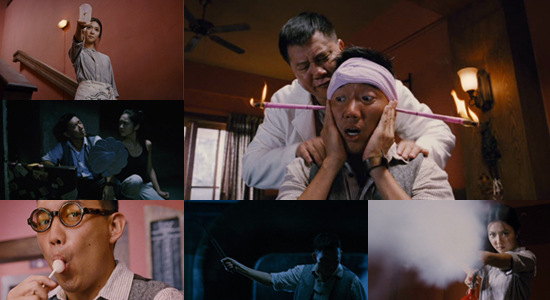 Fung Chih Chang might be best known as the writer of Stephen Chow’s much loved comedy Shaolin Soccer, but now The Bounty sees him step away from his typewriter for a bit to step behind the camera. Like Shaolin Soccer, The Bounty is a slapstick filled comedy fest with a bit of romance thrown in but it also adds a touch of the quirky crime caper. Fung’s industry connections obviously put him in good stead as he was able to amass a fairly starry HK cast including Chapman To, Fiona Sit and Alex Man among others. The Bounty may not be high art, but it is a hugely enjoyable, slightly mad comedy caper.

Cho (Chapman To) is down on his luck ex-cop turned bounty hunter who’s had to resort to rescuing lost dogs to claim the reward in order to get by. After an angry dog owner doesn’t want to pay up and gets her well-built boyfriend to offer a decent argument in her favour, Cho hurriedly decides to take on a bounty for a dangerous criminal that would net him a cool $400,000 if it all works out. This latest mission seems him booking into the Lazy Inn - an odd place staffed by a father grieving for his missing daughter (Alex Man) and a crazy maid (Fiona Sit) where the most popular purpose of stay seems to be suicide. There’s also the matter of a new triad gang in the area (The Biting Sugarcane Gang) who’ve been making life difficult for just about everyone. Can Cho track down his prey and claim the bounty or will the weird denizens of this small island forever frustrate his purpose?

First things first, The Bounty is a delightfully weird film - "quirky" doesn’t quite do it justice. Soaked in classic Western tropes, it sees To’s endearingly silly bounty hunter riding into a new town in search of a wanted man and solving lots of other problems along the way. However, Cho is about as far from a classic Western hero as you could get with his slightly bumbling, two bit hustler style antics. He’s really just trying to stay a few steps ahead of everybody else and be out of town before everyone remembers where their pitchforks are. He also appears to have bought most of his equipment from the ads section of Detective Tales for Boys as his main weapons are an iron which fans out into a bullet proof shield and remote control little suitcase with pop out wheels that he uses to store all his gadgets. He’s also frequently seen sucking on a lollipop like a little boy playing sheriff - as it turns out he suffers from chronic (possibly selective) bouts of low blood sugar.

It’s To and frequent collaborator Fiona Sit who really make the film as successful as it is with their wholesale commitment to Fung’s strange set-up and ability to make their characters so charming. Yes, the world of The Bounty is a strange one but thanks to the cast’s wholesale commitment to its idiosyncrasies, somehow it all makes perfect sense. Also, as you might expect from Fung’s previous work there are a fair few action sequences which are all very well done and entertaining. In an extremely surprising turn of events, it has to be said that To actually makes a fairly convincing action star. His moves might be a little more street rat than martial arts master but who can say they would have expected Chapman To to be the highlight in an action movie, not as the comic relief but actually holding his own in a fight?

Nobody would try to claim that The Bounty is any kind of boundary-pushing new dawn for cinema, but it’s hard to deny to its earnest charm and plucky spirit. The middle’s a bit saggy, there are a few too many sub plots and places where it doesn’t quite come together but when it works it really does have something. Possibly too mad for some, The Bounty is a delightfully silly comedy crime caper that, although doesn’t always hit its marks, proves immensely enjoyable.

8
A madcap crime caper with heart, The Bounty has its problems but remains an extremely enjoyable Hong Kong action comedy.
COMMENT AND DISCUSS
blog comments powered by Disqus