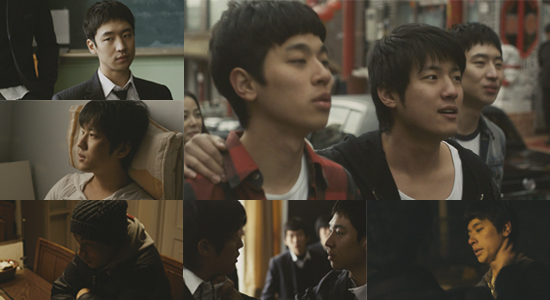 There have been a fair few films of late which deal, at least in part, with the bullying problem which seems to be endemic in the Korean schools system (and perhaps continues on into adult life). Bleak Night, the debut film from promising young director Yoon Sung-hyung, isn’t really about bullying but it does examine some of its causes and effects set against a tragic tale of the suicide of a high school boy who seemingly had the rest of his life in front of him.

As the film begins, we see two seemingly disconnected stories of an ordinary high school and a sad looking middle aged man. The man begins to look through the room of a teenage boy, brushing his school uniform and searching through draws until he finds a photograph of three boys. As it transpires this man’s son, Ji-tae, recently took his own life. His distraught father realises that as a hard working single father, he’s completely clueless as to why his son would have done this. He discovers that one of his son’s closest friends abruptly transferred to another school and Ji-tae had fallen out with the other friend too. In trying to understand his son’s death, the bereaved father discovers a sad tale of teenage friendships going about as wrong as they can go and a young man who felt he’d fallen too far to ever be able to climb back up again.

It’s best not to reveal too much of the plot, but it’s enough to say that Ji-tae is the bully, not the bullied as might be expected, and the film is as much about inverted emotion and fractious teenage male bonding as it about tragic loss of life. Ji-tae has no mother and is perhaps jealous of his friends’ happy family homes with cheerful mothers who cook family dinners and show up with drinks and snacks for their son’s friends. In someways he’s adopted these boys almost like brothers who make up a part of the family he feels he lacks when he has to go home to an empty house every night and make his own dinner, with only a slim hope of seeing his busy father before he goes to bed. As is usual for those difficult years, other things often start to get in the way of friendships - even bonds as intense as these. Becoming fearful of losing his most important relationships, Ji-tae becomes increasingly volatile and lashes out most dreadfully against the very people he’s so desperate not to lose.

Considering Bleak Night is a debut film that started out as a graduation feature made for very little money, Yoon Sung-hyung has crafted a very mature film that has a solid grip on its subject matter, with some very interesting things to say about human relationships and especially about the life of high school boys. The film works so well largely because of his finely crafted script which feels both natural and well observed, but also because of the fantastic performances Yoon manages to draw out of his three young stars. Each of the three main boys gives an extraordinarily grounded and naturalistic performance that avoids all of the clichés of teenage drama and never descends into melodrama. The film’s non-linear structure and lack of clear cut answers as to the central question may frustrate some, but for others Bleak Night provides both a fascinating character study and a snapshot of Korean social relations as they appear at the present time.

Bleak Night does have a few flaws - like many Korean films it does end up feeling a little bit long, especially when its almost theatrical reliance on dramatic dialogues makes up the main thrust of the drama. However, for a debut film it’s handled with remarkable assurance and makes what would could have been an overwrought and melodramatic subject into an engaging and quite thought-provoking study of teenage friendships. Yoon Sung-hyung, as well as his three young stars - Lee Je-hoon, Park Jung-min and Seo Jun-young - have all marked themselves as being worthy of future attention thanks to this extremely impressive debut. Bleak Night might not always be easy or enjoyable viewing, but is all the more rewarding for it.

8
An impressive debut which which makes some interesting observations regarding human nature.
COMMENT AND DISCUSS
blog comments powered by Disqus