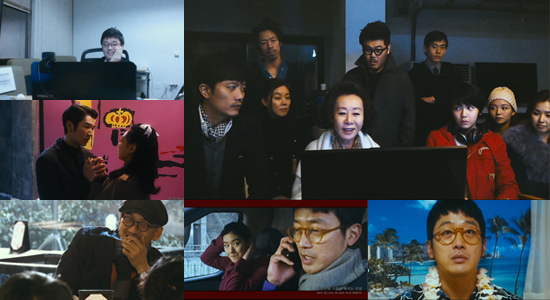 When Korean director E J-yong was commissioned to make a short film as an advertisement for Samsung, he thought to himself what a wonderful idea it would be if he could test modern technology to its limits and direct the film remotely from a hotel room in LA. In a particularly meta touch, the script he’s designed for the film also features a Korean director remotely directing a film, the only difference being that the fake director is doing it because his overseas girlfriend is in town and he’s trying to avoid having to choose between love and money. Like E’s previous film, Actresses, which got some of Korea’s most talented actresses together for a fashion shoot where they proceeded to trash talk the industry and each other, Behind the Camera is a fiercely funny behind the scenes style mockumentary where the lines between reality and fiction are anything but clear.

As the film begins, some of Korea’s best-known talent has been assembled for a preliminary meeting regarding the short film they’re going to be making over the next two days - only there’s one very important person who doesn’t seem to have arrived yet. Coming as a surprise to some, the producer then stands up and makes an announcement that this film is going to be a little different, the first of its kind in fact as the director will not be present on set at any point during the shoot but will be supervising from LA via Skype! Some members of cast take this better than others, especially as they lose wireless contact almost as soon as E starts trying to explain the nature of the concept. Predictably, some don’t even believe he’s really in LA at all, just engaging in a elaborate practical joke, but others regard the whole thing as a farce and vaguely insulting to their status in the industry. As time moves on, the crew gradually start just ignoring E and doing their own thing, and it’s clear one or two of them have their eyes on the director’s chair. Can you really direct a film from half-way across the world and still realise your vision in the same way you would if you were really standing on the set? What’s more, is the idea of a director in itself anything more than a vain conceit if all you do is say ‘yes’, ‘no’, and ‘cut’?

In the wrong hands, films with this sort of concept can go horribly wrong. Often too clever by half, anything with a meta construct has a serious risk of ending up on the wrong side of pretentious but it’s clear that E J-yong’s intentions are a world away from any such self-aggrandisement. Essentially a bolted-on companion piece to his Samsung commercial (what a fantastic use of time!), what E has crafted is a warm and witty backstage look at the movie-making business. Completely unafraid to poke fun at himself as the director with a high concept who may or may not be in Hollywood trying to make it in America like his friends Park Chan-wook, Kim Ji-woon and Bong Joon-ho (now he’s made a film in Hollywood even if it wasn’t a Hollywood film), Behind the Camera takes what could be a fairly thin joke and unpacks it in such a witty fashion that it easily sustains itself over the course of a full length film.

Like Actresses, Behind the Camera assembles a whole host of Korean cinema talent with actors, actresses and industry personnel mostly playing themselves. Some of the funniest moments in the film occur when the cast and crew are just hanging out together and chatting generally about various things. Yun Yoe-jong had taken a brief break from filming Im Sang-soo’s A Taste of Money in order to take part in this mini-project as a favour to E who hasn’t even bothered to turn up! In fact she originally told him she was too busy, but after he sent her a depressing photo of himself begging her to star in his film she gave in. If anyone has earned the right to a few salty and spiky retorts after such a long and illustrious career it’s certainly Yun Yeo-jong, and witnessing her intense displeasure with the entire endeavour is one of the highlights of the film. There are also plenty of meta references to the Korean film industry and cinema history for those who are well versed enough to pick up on them.

At first glance, Behind the Camera might sound like one of those precious industry “mockmentaries” that are never quite as funny as they think they are, but Behind the Camera is different precisely because it isn’t afraid to turn the camera around and expose what really goes on backstage. You genuinely can’t tell what is ‘real’ and what is ‘constructed’, but what is certainly true is that Behind the Camera’s warm and humorous outlook make it one of the funniest Korean comedies of recent times.

8
A warm and witty meta look at backstage life, Behind the Camera is one of the funniest Korean comedies of recent times.
COMMENT AND DISCUSS
blog comments powered by Disqus