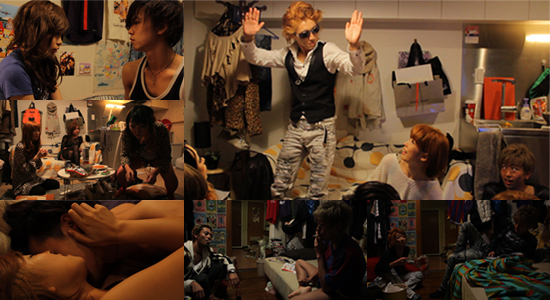 Be My Baby (Theatrical screening)

Be My Baby is the sleeper hit of the Japanese ‘workshop’ indie filmmaking movement - made over four days for less than $10,000 US, it’s certainly a more intimate affair than director Hitoshi Ohne’s previous film Moteki (Love Strikes!), a glossy mainstream comedy drama and the big screen incarnation of a popular TV drama. Once again though, Ohne trains his lens on the often messy romantic entanglements of the young people of today. Based on a stage play, Be My Baby looks at the lives of a number of ‘Gyaru’ guys and girls whose various relationships seem to go through a number of dramatic changes over a two week period following a house party.

Koji and Tomoko seem to be the lynchpin couple of this group of friends. They cohabit in a small Tokyo apartment and have invited over a number of friends for some relaxed food and drink. Among them are Koji’s younger brother Naoki and new girlfriend, Satomi; Koji’s friend Yuta who’s brought his flatmate Takashi; Tomoko’s friends Kaori and Yuko, who she hopes to set up with Koji’s friend Osamu. The party seems to go okay on the surface of things and everybody leaves as if they’ve had a great time, but afterwards the cracks begin to show. Koji berates Tomoko for not properly including his brother’s girlfriend as it’s obviously the girls’ job to take care of the girls, and the guys start apologising to the slimy Osamu for having introduced him to ‘a dog’ like Yuko. The story of a group of entirely trivial people who seem to take themselves way too seriously, Be My Baby seeks to expose this ugly side of the modern life of the young and fashionable.

Make no bones about it, the cast of Be My Baby are some of the most infuriating people ever committed to celluloid (well, digital video). Following the Gyaru fashion trend, they deliberately dress in really gaudy, bold clashing outfits with a lot of leopard print and exaggerated make-up. They’re in their late twenties but still only work part time and seem to have no interest in normal pursuits like careers or marriage but seem intent on continuing to not really enjoy their everyday existence. Being at the party with them is a bit like being invited to the gathering of a friend of a friend where you feel as if you sort of know people but not really, so you feel awkward and a bit left out trying to work out how everybody knows everybody else and how they all fit together. Everybody’s saying one thing but doing something else; they look like friends but they aren’t really - they’re just a bunch of people in the same scene who’ve kind of ended up together.

Koji, who’s the king of the group, seems to take pleasure in emotionally torturing his live-in girlfriend Tomoko whilst running her down with his friends and claiming to be on the verge of breaking things off, yet it’s clear this is all some kind of egocentric bluster. Tomoko seems content to be submissive, apologise profusely to keep Koji happy and cry that she doesn’t know how she’d live without him but that doesn’t ring true either. Naoki and Satomi are still students and aren’t really part of the Gyaru scene - at first they seem different to the others, but Naoki is a smooth-talking player whom Satomi suspects of infidelity so she requires photographic proof of his whereabouts while she’s at work, yet she has her secrets too. Kaori is on some kind of revenge-fuelled sexual adventure while Yuko and Osamu have developed a completely bizarre and almost abusive relationship where he orders her about and joins in with his friends’ jokes about her appearance but breaks down at the thought she might end things. Everyone is completely self-obsessed yet more concerned about how others see them than how they see themselves. Nobody really understands what they want and nobody seems to truly care about anything.

As an examination of ultra-modern sexual mores, Be My Baby is a telling exposé of a dangerous social phenomenon, but 138 minutes is an awfully long time to spend with such vacuous people. Considering its humble origins, Be My Baby is impressively made with some fantastically nuanced performances from its young cast, but it’s difficult to get past just how unpleasant these characters can be. Some viewers may find their antics funnier than others - there are undeniably moments of comedy but viewers who don’t find the idea of laughing at people they disapprove of amusing might not find much to laugh at. It’s easy to see how the film developed from a theatrical production as it does often feel like a trendy student play belittling the uncool kids who think they’re cool, but the picture it paints of modern youth is pretty bleak. Interesting, but often not enjoyable, Be My Baby is an important insight into a troubling social phenomenon but its frivolous characters may try the audience’s patience.

7
Interesting and insightful if not exactly always enjoyable, Be My Baby is an impressive indie effort that makes the most of its meagre budget.
COMMENT AND DISCUSS
blog comments powered by Disqus